Inside ‘Us Kids’ Documentary: Why Parkland Survivors Want to Remind the World They’re Still Kids 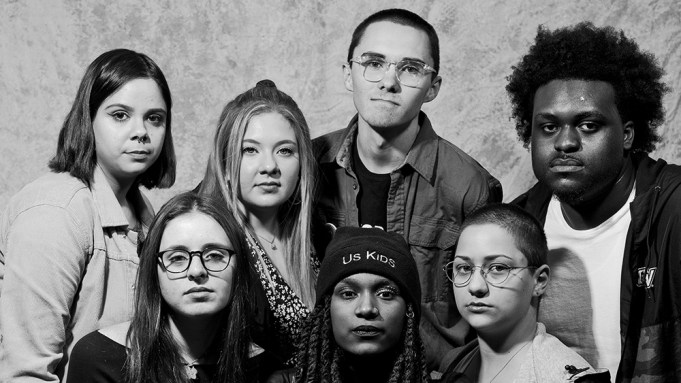 After a 2018 mass shooting at a South Florida high school left 17 people dead and 17 more injured, Parkland students Emma Gonzalez, David Hogg and Jackie Corin found themselves at the forefront of a national conversation about gun control reform before they were even old enough to vote.

Two years after the tragedy at Marjory Stoneman Douglas High School, the survivors are again grappling with the legacy of that terrible day, this time in “Us Kids,” a documentary by Kim A. Snyder (“Newtown”) that premiered at the Sundance Film Festival. Through the eyes of the young activists, “Us Kids” chronicles the global impact of their efforts over the 18 months that followed, including the March for Our Lives movement and the Road to Change tour to mobilize the youth vote during midterm elections.

“We’re looking forward to using this film as a tool to facilitate more conversations about gun violence prevention around the country and youth civic engagement as a whole,” Corin said at the Variety Sundance Studio in Park City. “The bare minimum [people] can do is have a conversation about this at their dinner table or bring it to people at school and make more people aware about the issue.”

Instead of focusing solely on the trauma that propelled the high schoolers to ignite change, the documentary gives the students space to be normal kids. They might now lead CNN Town Halls and stage nationwide protests, but they also joke, belt out throwbacks and obsess over memes on Instagram.

“Obviously, there are plenty of critics out there who think, ‘You guys aren’t reacting to this properly, you’re faking all of your emotions, this didn’t happen, this is a conspiracy,'” Gonzalez said. “But we are children. We have a lot of energy, we skip down the hallway sometimes — sorry.”

After the shooting, the students from Stoneman Douglas were thrust into the spotlight, regularly giving interviews to national news organizations. As a result, Smith says they felt the public’s perception stripped them of their childhood. “You’re automatically an adult because you demanded change,” she says. The hope in “Us Kids,” Snyder adds, is that the documentary helps the students reclaim their own narrative in a way that comes across “authentic to what they feel.”

“From this intergenerational way of looking at it, I’m inspired,” Snyder said. “The fact that they trusted a middle-aged woman to even work with them is pretty cool.”

The youth of America might look to them now for political guidance, a responsibility they don’t take lightly, but the Parkland teens maintain they are more than just what they advocate for.

“I’m not just an activist, but at many times I feel that way,” said Parkland student Samantha Fuentes, who survived being shot. “This movie gave me more than just that feeling. It made me feel like an individual again, like a person, like I have substance.”

Though March for Our Lives was born out Parkland’s tragedy, Hogg emphasized the movement’s reach extends far beyond their small town.

“March for Our Lives is about creating a generation of students and young people across all different communities in the United States — black and brown communities, LGBTQ communities — to show that America is one community,” Hogg said.

The documentary also journeys beyond South Florida, introducing teen activists Bria Smith of Milwaukee and Alex King of Chicago, whom the Stoneman Douglas students met while organizing Road to Change. The film weaves in inner-city voices like Smith, who says she grew up all but desensitized to gun violence, to demonstrate the importance of African American representation.

“I was inspired by these people who didn’t look like me, who came from a community that was so f—ing different,” Smith said. “I saw so much violence when I was young that it was normalized and conditioned for me. I never thought I’d be in this conversation or have a platform. And I’m happy it’s small because my impact is larger.”

Watch the full video interview above.