KiKi Layne on ‘The Old Guard’: ‘There Are Black Female Superheroes in Real Life’ 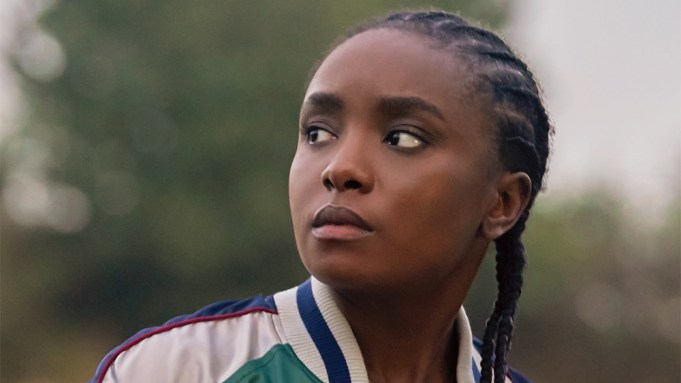 KiKi Layne is a natural — and not just when it comes to acting. While training to star opposite Charlize Theron in Gina Prince-Bythewood’s graphic novel-based film “The Old Guard” (streaming on Netflix beginning July 10), the 28-year-old learned she’s quite adept at preparing firearms. “Our tactical trainer was blown away at how smooth all of my reloads were,” Layne tells Variety. “I was changing my magazines like I was born doing it.” Layne, whose breakout role came in Barry Jenkins’ 2018 movie “If Beale Street Could Talk,” trained for more than nine weeks to master the combat and martial arts skills necessary to play Nile Freeman, the newest (albeit reluctant) recruit into Theron’s band of immortal mercenaries.

You had a fight scene against Theron your first day on set; what was it like going toe to toe with one of the baddest action stars in the business?

They threw me right into it, but I’m grateful for it. Obviously, I’m like, “Oh my goodness, what have I gotten myself into?” But, I think it was really essential for the relationship that Charlize and I had to build, that kind of mirrored Andy (Theron) and Nile’s relationship, to start in that place where even though we’re fighting against each other, we still have to support each other and look out for each other. One of the blessings about it is that we did get so much time to train. They started with us individually, and then they brought us together to experience what it’s like to dance with this other person. But I’m also [thinking], “Girl, if you actually hit her in the face…”

Let’s talk about training — what else did you guys have to learn?

For my character, the military and tactical training was extremely important and because I was playing a marine, so that had to look you know as genuine as possible for an actor coming in with only a few weeks or so to try to grasp what people have spent years mastering. So that was of course a huge part of it. Boxing — that’s kind of the base of Nile’s fighting style is just the boxing. So that was cool to do that for the first time; I actually really enjoyed that and then being in the gym the most that I’ve ever been in the gym in my entire life. It definitely pushed my body in a way that it had never been pushed before. I felt like I was discovering muscles and soreness that I didn’t even know was possible. So I’m very grateful for Epsom salt baths, for bringing me back to life after literally hours a day of training.

What was the hardest thing to master?

More of the like actual stunt [work] like throwing people, flipping somebody over your shoulder and stuff like that. That’s just completely foreign to take somebody’s weight, and just seriously flip them over and trust yourself and trust them. I mean stunt people are amazing — the risks that they take to help us, tell these stories. Shout out to all this stunt people that were a part of making this happen.

From day one just being able to watch her, just seeing what she brought to set, the confidence that she had, the amount of work that she came to set with was super inspiring and just her knowledge of creating an action film and telling a story through action. I was blown away — this is a woman who has been such a huge part in really showcasing the abilities that women have to tell these stories and to lead these stories. I really couldn’t have asked for a better entry into the action genre.

What about being directed by Gina Prince-Bythewood?

Being able to actually meet and work with her, initially just from our first meeting, I was excited because she was very committed to really getting to the heart of these characters and the depths of their experiences — why they do the things that they do and how they got to where they are. She was committed to not letting that get lost in his bigger action film machine. It also was dope to have somebody to lean on who understood what it was like coming from these smaller, more intimate projects to now we’re on this huge action set and then also having another Black woman there.

Nile is essentially a Black woman superhero, especially since she’s a military soldier. What does it mean to get to play a role like that?

It’s the type of thing that I’ve always wanted to do. I feel like my biggest goal with my career is to step into roles and into spaces that actresses that look like me have been left out of, and showing that we’re just as capable and that we belong in these roles and these stories just as much, especially because there are Black female superheroes in real life that really exists. So why don’t we see that in film more? I’m grateful to be a part of being a representation of that and showing the strength that we have in that way.

Tell me more about working Charlize and Gina after co-starring with Regina King in “If Beale Street Could Talk.” What have you taken away from working with those three women?

What’s amazing about all these women is the amount of experience that they have and how much time they’ve been in the industry, but how real they are. I’ve been very, very lucky in that regard because a lot of people get into this industry and really lose themselves. The three of them — and I’ll add Shari [Headley] from “Coming 2 America” — these are women who have remained true to themselves. They know what they want, they believe that they’re going to get it and they’re not going to sacrifice their integrity to get it. And I know that it’s not by accident that I’ve been placed around these type of women so early in my career, so that I know, wherever I go, I don’t have to give up the truth of who I am to get to where I’m trying to get to.