Thomas Kail and the cast of 'Freestyle Love Supreme' on bringing their improv rap show to Broadway and the big screen. 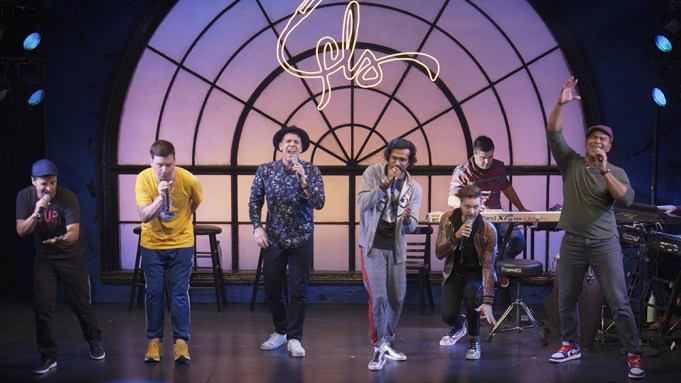 Courtesy of 'We Are Freestyle Love Supreme'

Before turning “Hamilton” and “In the Heights” into musical phenomenons, Lin-Manuel Miranda could have been found on stage, spouting off-the-cuff rhymes with his improv group, “Freestyle Love Supreme.”

After performing across the globe, the troupe — founded 15 years ago by Miranda, his frequent collaborator Thomas Kail and emcee Anthony Veneziale — made its Broadway debut last October in a four-month stint at the Booth Theater. It was a rap-filled evening that’s pretty far removed from the Disney musicals and Rodgers and Hammerstein revivals that dominate the Great White Way.

The group’s latest return to the stage also marked the culmination of a project that’s been years in the making: “We Are Freestyle Love Supreme,” a documentary chronicling their evolution from their beginnings at the Drama Bookshop in New York City to the Main Stem. The movie, directed by Andrew Fried, will have its world premiere at Sundance Film Festival. Produced by Kail, Miranda, Fried, Jenny and Jon Steingart, Jill Furman and Sarina Roma, “We Are Freestyle Love Supreme” is seeking distribution.

The documentary, spanning the group’s decade-and-a-half history, came together by chance. After Fried saw “Freestyle Love Supreme” perform in Manhattan in 2005, he was inspired to start rolling the cameras. He first tagged along with the group as they traveled that year to the Edinburgh Film Festival.

“I was just floored by them,” Fried recalled. “That’s not to say I starting to shoot a documentary. I didn’t know what the intent was — to make a TV show?”

For Kail, the idea was already forming. But it wasn’t until years later, in late 2018, he officially pitched the idea to Fried as a documentary starting with the group’s early aughts.

“If Michael Apted made ‘7 Up’ and Richard Linklater made ‘Boyhood,’ I thought maybe I could call Andrew and see if we could have these two bookends about this group,” Kail said.

“We Are Freestyle Love Supreme” journeys back to the days before “Hamilton” and “In the Heights” swept Broadway. That made it especially emotional for members like Christopher Jackson, who has teamed with Miranda on all three shows, to reflect on a time before he became known to theatergoers as Benny and George Washington.

“Life was at the height of its uncertainty for me, and so to see myself free from a lot of that was a beautiful experience,” Jackson said. “The kid I was watching didn’t know what was in store for him. The uncertainty I was walking around with was so spectacular.”

“People who appreciate ‘In the Heights’ or ‘Hamilton’ now get a chance to experience ‘Freestyle,'” Kail said. “It just grew our audience, and that clearly had a lot to do with the proliferation and reach of ‘In the Heights’ and ‘Hamilton.'”

Miranda’s musical sensation about the ten-dollar founding father proved hip-hop certainly had a place on the stage. But the anomaly of having an entirely improvised show on Broadway isn’t lost on its core crew.

“Improv doesn’t happen on Broadway. It’s risky and scary. For that reason, it’s great for Broadway right now,” said Veneziale, better known to audience members as Two-Touch. “People need to be able to hear and listen to each other in real time more now than ever before. Our show creates a pretty strong community, no matter what your viewpoint on politics or religion or ideology. People feel more bonded after the show happens just by having been together.”

Since its founding, the group has expanded well beyond its core members, adding rapper Utkarsh Ambudkar, Ashley Pérez Flanagan and Aneesa Folds, beatboxers Chris Sullivan and Kaila Mullady and keyboard players Arthur Lewis and Ian Weinberger. But even as its presence has grown, the show’s structure, infusing hip-hop and comedy to riff about the good and the bad of everyday life, has maintained.

Its originators believe “Freestyle Love Supreme” has endured for as long as it has because of its emphasis on the second word in its name: Love.

“It’s rare to see comedy or hip-hop that doesn’t have an edge to it,” Fried said. “Comedy so often is about making somebody feel less than. Hip-hop is so often about bragging how you are better than. My hope is you can see these two genres fuse in such a beautiful way that’s not based on either of those principles.”

Though their Broadway bout wrapped up in January, the group doesn’t expect that its most recent stage reunion will be the last.

“Being on the street trying to sell our show, that felt like the kind of moment that would be really effective cinematically to demonstrate where we started, which was hustling,” Kail said. “In reality, we’re still hustling. Now they just gave us a theater.”

Watch an exclusive clip from the documentary, “We Are Freestyle Love Supreme,” above.