‘Borat 2’: How Sacha Baron Cohen’s Unsuspecting Targets Feel About Being in the Movie 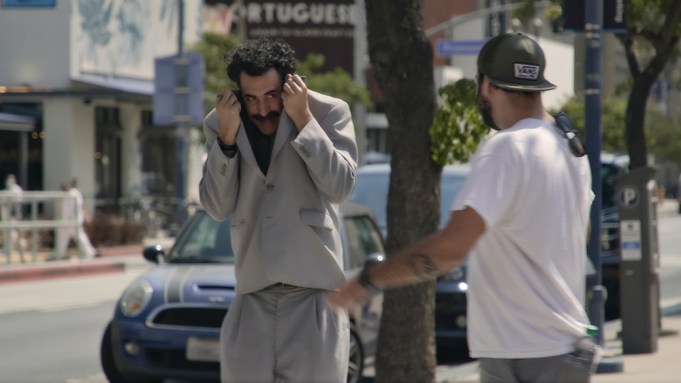 Warning: Major spoilers below for “Borat Subsequent Moviefilm.” Not nice!

In “Borat Subsequent Moviefilm,” renowned Kazakh journalist Borat Sagdiyev (Sacha Baron Cohen) returns to the U.S. and A. to redeem his country after humiliating them in the 2006 documentary “Borat: Cultural Learnings of America for Make Benefit Glorious Nation of Kazakhstan.” As an olive branch of sorts, Borat intends to gift his 15-year-old daughter Tutar (Maria Bakalova) to “America’s Most Famous Ladies’ Man,” Vice President Mike Pence. (The sequel aptly has the unwieldy moniker: “Borat Subsequent Moviefilm: Delivery of Prodigious Bribe to American Regime for Make Benefit Once Glorious Nation of Kazakhstan.”)

In true Borat fashion, Baron Cohen ignites chaos as he pranks everyday Americans and some real-life public figures in the name of bringing honor to Kazakhstan. Baron Cohen famously goes to great lengths to trick unwitting victims into appearing in his movies. In fact, many didn’t know the true use of what they filmed until the “Borat” sequel premiered on Amazon Prime last weekend.

Here’s how some unsuspecting stars have responded to playing a role in “Borat Subsequent Moviefilm.”

In an effort to transform his undomesticated teenage daughter into a suitable gift for Mike Pence, they meet Instagram influencer Macy Chanel, who explains how to become a “sugar baby,” a younger woman dating an older (presumably wealthy) man. When Tutar says she would prefer a man that’s near death, Chanel advises her to find “someone who just had a heart attack.” She also suggests Tutar get a makeover and recommends that she should be “submissive” and “weak” to attract men.

Chanel told IndieWire that she thought the scene was for an upcoming Netflix series.

“I was misled into playing a role and being cast as someone that does not reflect who I am,” Chanel said. “I have enjoyed a successful modeling an acting career where I can play any role given. In this case and probably many others I did not read the ‘fine’ print. As well as lacking the resources to read every casting contract.”

Borat introduces Tutar — under the surnames Phillip Drummond III and Sandra Jessica Parker Drummond — at a debutante ball in Macon, Georgia. Monroe County Reporter publisher Will Davis, who attended the ball with his 18-year-old daughter, recounted the experience in his newspaper. He says the staged event was filmed under the guise that it was for a fictional movie about Southern belles making their debut. Guests, who were paid $100 to show up, were tested on their pop culture knowledge beforehand. Those unfamiliar with Baron Cohen were invited to watch Borat and Tutar’s touching, yet graphic, father-daughter dance that ends with Tutar’s “moon blood” on full display.

“They began dancing side by side in synch when suddenly the “daughter” lifted her hoop skirt, gyrating and revealing no underwear,” Davis wrote. “That’s when all of us who were sober marched to the checkout desk, demanded our phones back and hit the road. My precious daughter and I walked out into the cool Macon night with mouths agape wondering what had just happened.”

He later found out that the man who was asking “some of the fathers a ‘price’ for their daughters” was indeed Baron Cohen, and the scene was for a “Borat” sequel.

“Cohen’s modus operandi seems to be trying to embarrass and shock southern conservative audiences on film. Of course our cotillion friends, having been hoo-dooed into hosting the charade, were humiliated and apologetic,” Davis said. “I have no real problem with Borat getting a laugh at our expense. I find some of his stuff pretty funny. I will laugh a lot harder if we get the last laugh on Nov. 3.”

Borat thinks Tutar needs plastic surgery to make her more appealing to American men. But he doesn’t have enough money to pay for breast implants, so he leaves his daughter with a professional babysitter named Jeanise Jones as he goes to make extra cash. Jones, who appears mildly horrified as Borat treats Tutar like a dog and remains shockingly patient as Tutar insists only a man can read and drive cars, says she was not clued in on the parody. She was told that they were filming a documentary.

“Thank you to all who have reached out to me from here in OKC to around the entire world! Yes it was me in the Borat movie,” she wrote on Facebook. “I was recruited to be in a “Documentary”. At ABSOLUTELY NO time did I know this was a satirical comedy movie and that I was being “setup” so to speak.”

In one of the more touching moments in the movie, Jones talks Tutar out of getting cosmetic surgery. “I want you to be happy,” she says. “Think about going to school. Use your brain, because your daddy is a liar.”

Jones continued on Facebook, “It’s all good I just did what my Mother Ozell Smith (RIP) taught me to do from as far back as I remember. Again, thank you to all and to God be the glory for it all.”

Borat, on the verge of suicide upon learning on Facebook that the Holocaust wasn’t real, goes to a synagogue in Marietta, Georgia to “wait for the next mass shooting.” While outfitted in truly horrific anti-Semitic garb, he encounters Judith Dim Evans, a Holocaust survivor, and her friend Doris. Evans assures Borat that Jews are kind people and that the Holocaust did happen.

Evans died earlier this year, and her estate filed a lawsuit against Amazon and Oak Springs Productions, saying it was filmed “under false pretenses with the intent of appropriating her likeness.” The lawsuit says Evans was approached for what she thought was a “serious documentary” about the Holocaust.

“Upon learning after giving the interview that the movie was actually a comedy intended to mock the Holocaust and Jewish culture, Ms. Evans was horrified and upset,” the lawsuit states. “Had Ms. Evans been informed about the true nature of the film and purpose for the interview, she would not have agreed to participate in the interview.” Baron Cohen apparently broke character to explain the stunt and dedicated the film to her memory.

Since coronavirus has forced everyone to quarantine, Borat spends some time with Jerry Holleman and Jim Russell, two Trump supporting conspiracy theorists. During his weeklong stay at their house, they help him write the “Wuhan Flu Song,” including lyrics like “Obama, what we gonna do? Inject him with the Wuhan flu” and “Journalists, what we gonna do? Chop ’em up like the Saudis do.” Borat, in disguise, performed the admittedly catchy tune at a right-wing rally opposing the pandemic-related lockdown and got the crowd to sing along to the racist lyrics.

The stunt made national news at the time, though nobody knew it was for another “Borat” movie. James Connor Blair, a Yelm, Washington city council member, took to Facebook to write about the surprise appearance at the March for Our Rights rally in June.

“Sacha Baron Cohen disguised as a PAC out of Southern California, paid for the stage setup and musical entertainment. Came on stage disguised as the lead singer of the last band, singing a bunch of racist, hateful, disgusting shit,” Blair wrote at the time. “His security blocked event organizers from getting him off the stage or pulling power from the generator. After the crowd realized what he was saying, and turned on him, his security then rushed the stage and evacuated them to a waiting private ambulance that was contracted to be their escape transport.”

Trump’s current attorney Rudy Giuliani agrees to an interview in a hotel room with Tutar, posing as a conservative TV journalist. The palpably awkward exchange ends with Tutar and Giulani heading into a bedroom as the former New York City mayor says, “You can give me your phone number and your address.” After Giuliani lays back in the bed and fiddles with his pants, Borat bursts into the room shouting, “She’s 15. She’s too old for you.”

Before the movie premiered, Giuliani defended himself and called the clip “a complete fabrication. “I was tucking in my shirt after taking off the recording equipment. At no time before, during, or after the interview was I ever inappropriate. If Sacha Baron Cohen implies otherwise he is a stone-cold liar.”

Baron Cohen, speaking as Borat, swiftly came to the defense of “America’s mayor.”

“I here to defend America’s mayor Rudolph Giuliani,” Borat said in a video. “What was an innocent sexy-time encounter between a consenting man and my 15-year-old daughter has been turned into something disgusting by fake news media.”

Baron Cohen, as himself, commented on the ruse last week on “Good Morning America.” “I would say that if the president’s lawyer found what he did there appropriate behavior, then heaven knows what he’s done with other female journalists in hotel rooms,” he said. “It is what it is. He did what he did.”

Bakalova says she never felt in danger being left alone with Giuliani. “I always felt safe with our team, with our crew, with Sacha in my corner,” she said on “Good Morning America. “I never felt that I’d be in danger.”