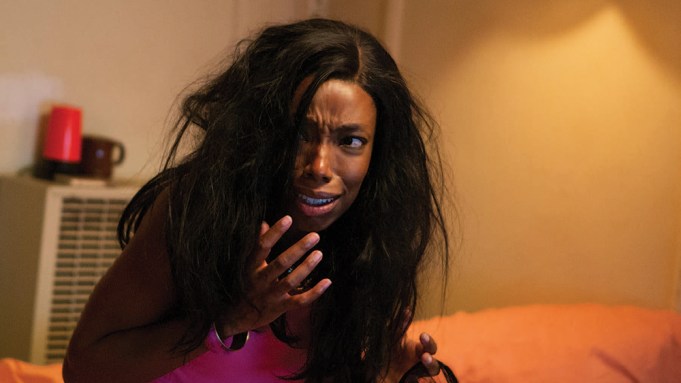 In the satirical horror film “Bad Hair,” which debuts Oct. 23 on Hulu, Elle Lorraine plays Anna, a young woman who adopts a new look in order to land a hosting gig at a “106 & Park”-like music countdown show. The hairstyle gets Anna the recognition she’s after, but it comes at a price. Though the film, which also stars Kelly Rowland, Vanessa Williams, Blair Underwood, Lena Waithe and Jay Pharoah, is set in the late 1980s, the struggle to make it in Hollywood is everlasting. The film’s credits read: “Introducing Elle Lorraine.” Says the rising star, “When I saw it at Sundance, I literally shrieked in my seat. To see that title card on-screen was like a dream come true. I’ve been imagining it for a very long time.”

Audiences may recognize you from “Insecure.” How does it feel to make your big-screen debut? It’s been pretty magical, to be honest. I’ve been working on this for some time. It’s like an iceberg — there’s so much [work] underneath — and there’s the moment that you get recognized for what you’ve done, to showcase the talent and your range. I think this [film] is that opportunity.

What was it like joining such a star-studded cast? I got to work with friends and people I’ve looked up to my entire life. Vanessa became my fairy godmother. I used to love “A Diva’s Christmas Carol,” and coming into this film, I was a little like, “Am I gonna have a [superfan] moment?” But Vanessa was so warm, she immediately broke any tension that we had. And Kelly, I think I fanned out for a second; she allowed me to have that, and then we had a good time.

The movie is terrifying but also has a much deeper message about society’s relationship to Black hair, especially in Hollywood. How did the story reflect your journey as an actor? It’s hard being a person and coming into your own and finding your identity, period. It’s even more difficult to do that and pursue something where so many people tell you who you’re supposed to be. [In society], we have very limited views of beauty, limited views of success and what is required to [get] there and the package that it has to be wrapped in. This film really showcases that, and it really breaks it open so that we can take some of these hilarious circumstances that Anna gets herself in and we can start to have deeper conversations. But I’m really grateful right now that Hollywood is starting to change. We’re starting to see people of different sizes, different shades.

Did anyone tell you to change your appearance to get work? Did you ever get a weave? Yes, I got a weave when I moved to L.A. I had straight hair back then, but I needed long straight hair. Imagine spending all that money trying to become something that I think I’m supposed to be and the world is telling me to be. I’ve even had agents and managers tell me I need to change my smile, [that] I need to not go in the sun in the summer. At one point, I tried to go blond, but I wanted to add a Black girl flair, and all of my hair fell out. So I then had to go through another identity crisis of “OK, what are you willing to sacrifice and risk within yourself to get there?” [I thought], “How about I go ahead and redefine beauty?” I started to put up images of beautiful Black women around my home, so that on a subconscious level I would start to soak in some of those new ideals. I’m the person I am today because of that journey.