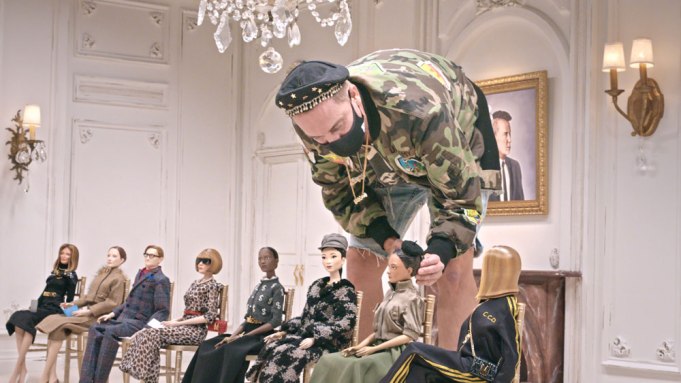 Instead of a live fashion show for his Moschino spring/summer 2021 collection, Scott teamed up with Jim Henson’s Creature Shop for a film showcasing 40 new looks using 30-inch marionettes.

“I tried to look at all of this as opportunities, not obstacles,” Scott told Variety ahead of the film’s Times Square premiere on Saturday morning. “My mantra has been from the very beginning, ‘My body may be in quarantine, but my mind isn’t.’ I’m a creative person who is extremely used to lots of people, travel, all these different things going on and to have everything just stop, I had to think about how to create and deliver the emotion of my work.

“I think in the end this format of me having created this film rather than a live a show is also way more inclusive with many more people being able to experience what only a few people usually get to experience live,” he said.

Both Winter and Scott had working relationships with the Jim Henson company. Winter has been lifelong friends with the Hensons and Scott dressed Miss Piggy in 2011’s “The Muppets” as well as for the movie’s red carpet premiere. “The puppeteers that we were able to get were some of the very best in the world,” Winter said. “Honestly it was effortless and fun because everyone from Jeremy on down was so passionate and collaborative.”

“No Strings Attached” was shot in just three days. ”For me there was no other way than on film in this way that I could convey the whimsy and fantasy that I do in a normal show,” Scott said.

Winter said, “Jeremy  is so open and collaborative. He came in with all these ideas…We had a lot of fun but everyone — once in while — we looked each other and were like, ‘Do we think this is going to work? Yeah, it’s going to work.’”

Scott designed the collection long before there were plans for a marionette movie. “In the beginning of April I started to think, I don’t know how [live fashion shows] are going to be possible and how can I do something differently,” he said. “When I came into this thought of the marionettes, I really started hunkering down and thinking of how to scale it down. And I also had to dress the front row as if I were a costumer on a film.”

Everyone portrayed in the front row received their marionettes as a gift from Scott.

If nothing else, Scott and Winter’s film may allow people to put their worries aside for a moment. “No one is in harm’s way here,” Scott said. “Everything is just fantasy and that’s what we need now more than ever, just to be able to forget about our problems and try to just have a smile and little warm fuzzies.”