Continue to Variety SKIP AD
You will be redirected back to your article in seconds
Sep 3, 2020 7:03am PT 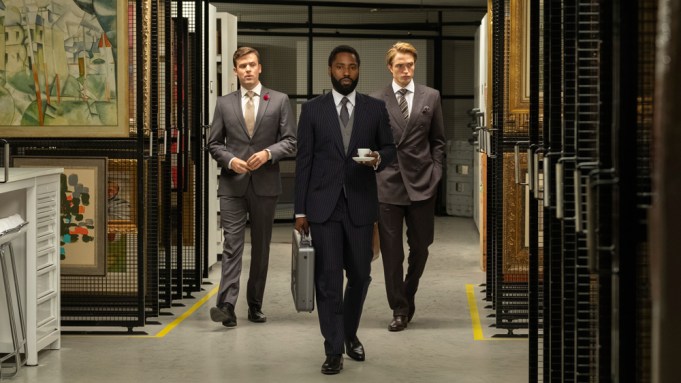 The future of film in an age of plague may be crystallized this weekend.

That’s because after numerous delays and months of anticipation, Christopher Nolan’s “Tenet” — the time-bending sci-fi epic that hopes to revive the beleaguered movie business  — is finally hitting U.S. cinemas.

But when it touches down in domestic theaters, “Tenet” will represent much more than the first major release since the pandemic hit (or, with all due respect to “The New Mutants,” the first that audiences are actually eager to see).

The next few days could serve as an inflection point in the ongoing conflict between traditional forms of media and digital disruptors. And the outcome may dictate how the industry moves forward as Hollywood — and the rest of the world — continues to grapple with the coronavirus crisis.

At the same time that Warner Bros. rolls out “Tenet” on the big screen, Disney’s “Mulan” will be released on Disney Plus for a premium price. “Mulan” is the rare mega-budgeted movie to skip U.S. theaters in favor of streaming and could serve as a bellwether for at-home entertainment during the pandemic. Starting Sept. 4, Disney Plus subscribers can watch the live-action adaptation for $30 on top of the service’s regular $6.99 monthly fee.

“This weekend will be a marker of success going forward in 2020,” said Jeff Bock, a box office analyst with Exhibitor Relations. “If ‘Tenet’ performs above expectations, Hollywood can start to ramp up [releasing movies]. But if ‘Tenet’ doesn’t reach the heights Warner Bros. was hoping, you might see big changes in terms of pivoting to premium video-on-demand.”

It’s not an exaggeration to say that coronavirus has brought the exhibition industry to its knees. Mass theater closures have left cinemas without revenues for months, pushing some to the brink of insolvency. And streaming has become even more popular during the shutdown with people trapped at home and desperate for something, anything, to get their minds off the unremitting bleakness that has been 2020.

If “Tenet” is expected to help determine how ready customers are to return to theaters, “Mulan” will demonstrate people’s willingness to shell out for the privilege of seeing buzzy movies at home. Both films carry massive price tags of around $200 million, not including the many millions more for global marketing campaigns, and need huge returns to justify their respective budgets.

Last spring, as cinemas started to shutter due to the pandemic, studios were forced to decide between keeping release dates, pushing movies into 2021 and putting others on streaming services. Warner Bros., with encouragement from Nolan, made the bold bet to release “Tenet” as soon as theaters were deemed safe to reopen. For “Mulan,” streaming became a more attractive proposition because Disney’s fantasy epic had already been marketed extensively when its theatrical run was cancelled just before its planned March opening.

“There are two different factions,” Bock noted. “People willing to go to theaters, and people who aren’t willing to budge, no matter how safe they tell us theaters are.”

“Mulan” isn’t skipping theaters entirely. In parts of the world where Disney Plus isn’t available, the movie will open on the silver screen in countries, including China on Sept. 11. The Middle Kingdom, even before the pandemic, is a pivotal market for “Mulan” because the film was made with appeal to Chinese moviegoers in mind. Already, the China box office is starting to significantly rebound since reopening — and local war movie “The Eight Hundred” has become a bona fide hit with over $300 million to date.

But even if “Mulan” breaks out in a huge way in China, Disney won’t profit as much from ticket sales. In China, studios only get a quarter of revenues, which is less than half of what they rake in Stateside. Warner Bros., on the other hand, is profiting from its willingness to take a gamble with “Tenet.” The studio will get more than 60% of domestic ticket sales, which is higher than its usual payday.

When it comes to restarting cinemas in the U.S., the country is behind many parts of the world as cases remain stubbornly high. Many movie theater chains, including AMC, Regal and Cinemark, have pegged their reopening to the launch of “Tenet.” Cinemas in New Jersey and Maryland were given permission this week to restart operations, leaving only three states — — New York, New Mexico and North Carolina — with cinemas entirely closed. In California, Washington, Florida and a few others, venues have only reopened in parts of the state. But Los Angeles and New York City, two areas that regularly represent the bulk of U.S. ticket sales, are still off limits with no set date to welcome back patrons.

Though the box office is in uncharted territory, experts predict that “Tenet” could generate north of $20 million from domestic theaters over the weekend. The movie will screen in more than 2,800 locations across the country — a significant footprint, albeit smaller than normal for a blockbuster. Traditionally, tentpoles can play on as many as 4,000 venues during opening weekend. In a sign of encouragement for Warner Bros. and Hollywood at large, “Tenet” kicked off with $53 million at the international box office last weekend. That’s a strong result considering many patrons likely aren’t rushing back to theaters during the pandemic.

“There’s a chance that both of these films do well in their respective formats,” Bock said. “That would be very good for the industry.”

The popularity of “Tenet” could dictate the future of movies like “Wonder Woman 1984,” the James Bond entry “No Time to Die” and Marvel’s “Black Widow.” But should “Tenet” fizzle, it could sound alarm bells and force studios to reassess movies that are still on the release calendar for the rest of 2020.

Industry experts say that given the unprecedented landscape, it’s more complicated than ever to assess a movie’s box office success. For one, opening weekend ticket sales won’t have the same effect as it once did. Now, “Tenet” doesn’t necessarily need to rely on outsized box office receipts to start, because it could theoretically play in theaters for months without much competition from other movies.

“All the traditional metrics, analyses and judgements about success have to be completely re-evalutated,” Dergarabedian said.

Also, Disney might not reveal just how many of Disney Plus’s 60 million subscribers shelled out to watch “Mulan” from the comfort of their couch. But there could be at least one way to know whether the cartoon waned in popularity since the original movie debuted in 1998.