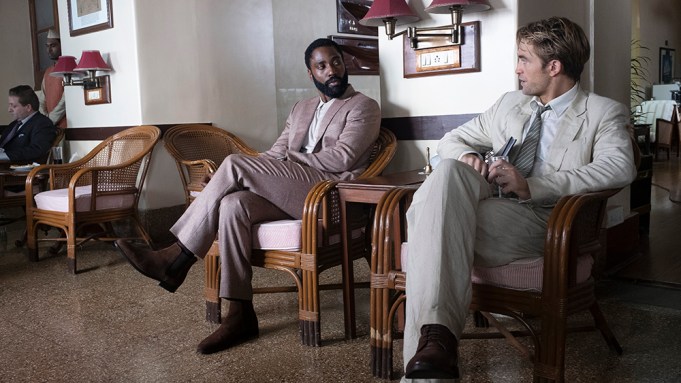 The time-bending sci-fi thriller generated $6.7 million in the U.S. and Canada during its second weekend of release, representing a 29% drop compared to opening weekend. Initially, Warner Bros., the studio behind “Tenet,” touted a $20 million debut. But a closer dissection of those numbers reveal they were heavily spun to include weekday preview screenings and the long holiday weekend. In reality, “Tenet” only made about $9 million between Friday and Sunday.

In an attempt to control the conversation around “Tenet’s” box office performance, Warner Bros. has been shielding domestic grosses for the film. Traditionally, studios share box office information on a daily basis, but that hasn’t been the case with “Tenet.” The studio took a bold bet since “Tenet” was the first major movie to debut during the pandemic, and Warner Bros. claims that it wants to ensure that reporters and rivals don’t unfairly contextualize the results and label them a financial flop.

Warner Bros. knew the film would have a slow start amid the pandemic, but the studio was clearly hoping that “Tenet” would perform better in the U.S. Want a clue as to how they really view the viability of U.S. theaters right now? Less than a week after “Tenet” premiered domestically, Warner Bros. delayed its comic book sequel “Wonder Woman 1984” from October to Christmas Day.

Roughly 65-75% of theaters in the U.S. have reopened, but major markets like New York, Los Angeles and San Fransisco remain closed. Cinemas that have resumed business have done so at reduced capacity, automatically limiting ticket sales.

Warner Bros. said it is optimistic that grosses will improve as new markets open for business. “Tenet” played in 100 more locations than it did last weekend, amounting to 2,910 venues in total. That number is expected to grow as cinemas in more cities are given permission to reopen. Thanks to multiplexes opening in Orange County, Los Angeles was the top-grossing region in the country this weekend. Dallas, Chicago, Salt Lake City and Phoenix also saw robust ticket sales.

The studio has also been encouraged by the turnout for premium formats, such as Imax and Dolby Cinema. Imax screens accounted for $23 million of “Tenet’s” box office haul.

“Imax has certainly proven to be the perfect cinematic dance partner for ‘Tenet,’” said Paul Dergarabedian, a senior media analyst with Comscore. “Nolan has been working with Imax for years, so it’s indeed appropriate that ‘Tenet’ would get a nice boost from this long-standing creative collaboration.”

David A. Gross, who runs the movie consulting firm Franchise Entertainment Research, assessed that “Tenet” had a better-than-projected hold during its second frame. But he said that still might not be enough to compensate for more pressing limitations facing the marketplace.

“Anecdotally, these drops look slightly better than what would be expected under normal circumstances,” Gross said. “However, they are not close to maintaining a level of business that makes up for the box office lost to the pandemic.”

“Tenet” has made bigger waves overseas, where coronavirus appears to be more under control and movie theaters have reopened to a more significant degree. Part of the reason that Warner Bros. opted to release “Tenet” during the pandemic is because Nolan’s films often make more money abroad than they do stateside.

Ticket sales for “Tenet” reached $177.5 million at the international box office and $207 million globally. Given its $200 million production budget, the movie needs to reach approximately $400 million worldwide to break even and closer to $450 million to get out of the red and into the black.

“Tenet” brought in $10 million in China, the world’s second biggest moviegoing market, boosting its haul in the country to $50 million. It landed behind “Mulan” and war epic “The Eight Hundred” on local box office charts, though neither “Tenet” nor “Mulan” amassed inspired ticket sales from theaters, despite 90% of locations reopening.

Disney’s live-action remake of the 1998 cartoon collected $23.2 million during opening weekend, an underwhelming result for a movie that was all but engineered for its appeal to Chinese audiences. So far, “Mulan has made $37.6 million globally. The $200 million-budgeted fantasy epic is forgoing a theatrical release in the U.S., and instead is available to rent on Disney Plus for $30.

Even without the pandemic, “Mulan” has been mired in controversy. It came under fire for filming in Xinjiang, a region in China where minorities have been forced to live in labor camps. In the credits for “Mulan,” the film thanked Chinese government organizations in Xinjiang that have been accused of human rights abuse. And last year, pro-democracy activists in Hong Kong called for boycotts after “Mulan” star Liu Yifei showed support for Hong Kong police during anti-government protests.

Elsewhere, Sony’s romantic comedy “The Broken Hearts Gallery” opened to $1.125 million from 2,204 screens over the weekend. Given the challenging environment, the studio called that number “terrific.” Sony acquired the film for $8 million, so it doesn’t need to reach blockbuster levels to turn a profit. “The Broken Hearts Gallery” — directed by Natalie Krinsky and executive produced by Selena Gomez — was generally well received by critics and moviegoers. It stars Geraldine Viswanathan as a 20-something New Yorker who creates an art gallery with mementos from past relationships.

“Early numbers are encouraging,” said Adrian Smith, Sony’s head of domestic distribution. “We’re excited to see how the film plays over time and how word of mouth about the film propels it.”

“The Broken Hearts Gallery” placed behind holdovers Disney’s “The New Mutants” and Solstice Studio’s “Unhinged” on domestic box office charts — though the latter two had a wider theatrical footprint.

“The New Mutants,” a poorly reviewed superhero adventure, has yet to find its footing in theaters and generated $2.1 million over the weekend. The X-Men spinoff is also flailing overseas, where it scraped together $3.8 million from 36 foreign markets. After three weekends on the big screen, the movie has made $15.3 million in the U.S. and $29 million worldwide.

Movie theaters, hit hard by the plague, looked at “Tenet” as a potential savior. Its paltry domestic grosses demonstrate that salvation for the exhibition industry remains a long way off. It will take more than Christopher Nolan to bring moviegoers back to cinemas.