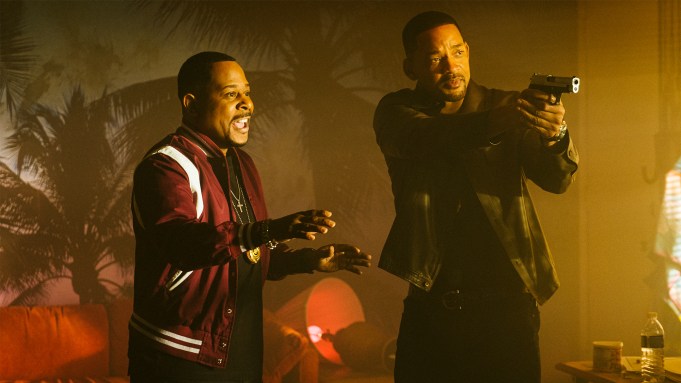 Will Smith and Martin Lawrence are showing plenty of staying power at North American multiplexes with about $31 million for its second weekend, estimates showed Saturday.

Sony’s third installment of the “Bad Boys” action comedy franchise is crossing the $100 million mark at the box office on Saturday, its ninth day of release, and will finish the weekend at about $117 million. “Bad Boys for Life” topped expectations over the Martin Luther King Jr. holiday with $73 million and has jolted the North American box office back to life after a disappointing 2019 saw a 4% overall decline.

Universal’s fifth frame of World War I epic “1917” will finish second with about $14.1 million at 3,937 sites amid plenty of awards season buzz, including  receiving 10 Academy Award nominations and the top film award from the Producers Guild of America on Jan. 18. “1917” will also cross the $100 million mark this weekend.

Universal’s second weekend of its pricey family adventure “Dolittle” will take third with $11 million at 4,155 venues million. That leaves the Robert Downey Jr. vehicle with about $43 million in its first 10 days in North America.

STX’s launch of Matthew McConaughey crime comedy “The Gentlemen” will follow in fourth with about $10 million at 2,165 locations. That’s in line with forecasts. McConaughey stars as an American expat looking to cash out of the marijuana empire he built in London. Guy Ritchie directed the starry cast, which includes Charlie Hunnam, Hugh Grant, Michelle Dockery, Colin Farrell and Jeremy Strong. Reviews has been solid with a 71% score on Rotten Tomatoes.

Sony’s durable “Jumanji: The Next Level” should finish fifth with about $7.7 million at 3,121 locations in its seventh weekend to, lift its domestic total to $282 million. That should edge Universal’s launch of the horror thriller “The Turning,” which looks to finish the frame with about $6.8 million at 2,571 sites amid a rare F mark on Cinemasore from patrons and a dismal 13% Rotten Tomatoes score among critics. The movie, based on Henry James’ 1898 novella “The Turn of the Screw,” stars Mackenzie Davis, Finn Wolfhard and Brooklynn Prince. Expectations have been for a launch in the $7 million to $9 million range.

Universal and DreamWorks are launching “The Turning,” which centers on a nanny tasked with taking care of two disturbed orphans. The movie, directed by Floria Sigismondi from a script by brothers Carey and Chad Hayes, is set at a mysterious estate in the Maine countryside.

Disney’s sixth weekend of “Star Wars: The Rise of Skywalker” is heading for seventh with $5.3 million at 2,800 sites and will cross the $500 milestone, the 15th film to do so.