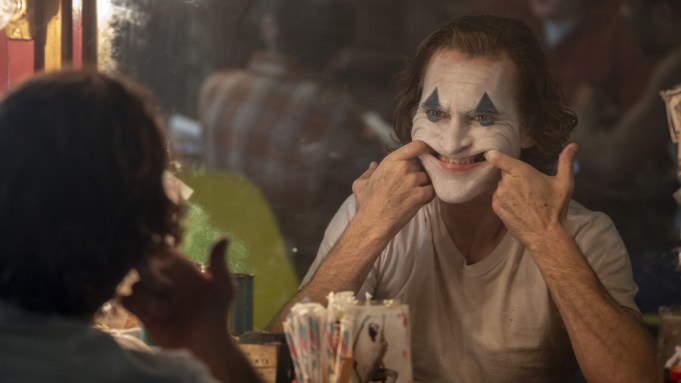 “Joker,” an R-rated blockbuster, topped the list of Oscar nominations on Monday, becoming the rare comic book film to resonate with awards voters. The best picture contender earned a leading 11 nominations, but the story of the morning will be the lack of diversity among the leading nominees and the exclusion of female filmmakers.

“Joker” will vie for top honors at the 92nd Academy Awards with “Once Upon a Time in Hollywood,” “The Irishman,” and “1917,” all of which earned 10 nominations. There are nine best picture contenders in total — a group that also includes “Ford v Ferrari,” “Jojo Rabbit,” “Little Women,” “Marriage Story” and “Parasite.”

In the major categories, it was a list of mostly white nominees, one that will likely inspire outrage, frustration, and pushback. Only one person of color, Cynthia Erivo for “Harriet,” was nominated in the acting categories. Female directors such as Greta Gerwig (“Little Women”), Kasi Lemmons (“Harriet”), and Lulu Wang (“The Farewell”) were also overlooked. Only five women have ever been nominated for director, and only one, Kathryn Bigelow (“The Hurt Locker”) has ever won the prize. Issa Rae, who had been enlisted to read off the nominees, made a biting nod to their exclusion after the directing contenders were unveiled. “Congratulations to those men,” she said. Perhaps anticipating the storm to come, press notes shared by the Oscars took pains to note that “a record 62 women were nominated, [representing] almost one third of this year’s nominees.”

“Joker,” which has earned over $1 billion at the global box office, was recognized for Joaquin Phoenix’s performance as a failed comic who turns to crime and for Todd Phillips’ directing. It is only the second comic-book movie to ever score a best picture nod, joining “Black Panther.” Though superhero movies have dominated the box office for over a decade, the Academy of Motion Picture Arts and Sciences, the group behind the Oscars, has been slower to embrace the genre. In 2009, it snubbed “The Dark Knight,” Christopher Nolan’s hugely influential Batman epic. The controversy over that move influenced the Oscars to expand the list of best picture nominees from five to a possible 10, with the goal of introducing more populist fare into the proceedings.

“Joker’s” dominance is also notable because comic book and superhero movies have been a subject of fierce debate this awards season. In a series of interviews, Martin Scorsese decried their cinematic merits, dismissing Marvel films as “theme park rides” and admitting he only saw “clips” of “Joker,” a film that plays like a homage to “Taxi Driver.”

Among the other major contenders, “Once Upon a Time in Hollywood,” Quentin Tarantino’s look at the last gasp of the golden age of movies, earned nominations for its screenplay, direction, and for the performances of Leonardo DiCaprio and Brad Pitt. Sony Pictures, the studio behind the film, had a very robust showing, picking up 20 nominations in total, including nods for “Little Women,” “A Beautiful Day in the Neighborhood” and “Pain and Glory.”

“1917,” a searing World War I drama that unfolds in one continuous shot, picked up nods for Sam Mendes’ direction and screenplay, as well as for Roger Deakins’ cinematography. The film is riding high after winning the Golden Globe for best drama and debuting in wide release to a mighty $36.5 million over the weekend.

“The Irishman,” Scorsese’s crackling gangster epic, earned nods for direction, screenplay, and for the supporting performances of Joe Pesci and Al Pacino. However, Robert De Niro, the star of the film, was shut out. With Monday’s nod, Scorsese is now the second-most honored director with nine nominations, behind only William Wyler.

“Parasite,” the critically acclaimed thriller about a family of grifters, made history, becoming the first South Korean movie to earn a best picture and best international feature film nomination. Bong Joon Ho also nabbed director and original screenplay nods and the film picked up six nominations in total. “Parasite’s” strong showing is a significant achievement for Neon, the upstart distributor behind the film. At a time when many indie studios are faltering, Neon, which was only founded three years ago, picked up an impressive eight Oscar nominations. It also scored best international feature and best documentary feature nods for “Honeyland,” the story of a Macedonian beekeeper.

Netflix has invested considerable resources into generating awards buzz in recent years, hiring awards sage Lisa Taback and backing films from auteurs such as Scorsese and Alfonso Cuaron. Last year, the streaming giant fell just short of its goal of nabbing a best picture statue, though it did earn a best director prize for “Roma’s” Cuaron.” This year, the bet appeared to pay off. Netflix picked up 24 nominations, the most of any entertainment company, and fielded best picture contenders such as “The Irishman” and “Marriage Story.”

Phoenix, having picked up a Golden Globe, is widely seen as the front-runner in the lead actor category. He will face off against DiCaprio’s aging TV star in “Once Upon a Time in Hollywood,” Jonathan Pryce’s chameleonic work as Pope Francis in “The Two Popes,” Antonio Banderas as a director in decline in “Pain and Glory” and Adam Driver as a man entangled in a messy divorce in “Marriage Story.”

“Judy” star Renée Zellweger, nominated for her transformative performance as Judy Garland,” is widely seen as the leading contender for best actress. She will compete against Charlize Theron’s work as former Fox News host Megyn Kelly in “Bombshell,” Saoirse Ronan as an aspiring novelist in “Little Women,” Erivo as Harriet Tubman in “Harriet,” and Scarlett Johansson as the other half of the divorcing couple in “Marriage Story.” Johansson was also nominated in the supporting category for her turn as a mother in Nazi Germany in “Jojo Rabbit.” Only 11 other actors have earned double nominations in the same year. In another moment of history-making, Ronan became the second-youngest four-time acting nominee, at age 25. Jennifer Lawrence is the youngest.

There were several notable surprises and snubs. Jennifer Lopez was overlooked for her turn as a law-bending stripper in “Hustlers,” as were Jamie Foxx for his turn as a man falsely convicted of murder in “Just Mercy” and Adam Sandler for his performance as a gambling addict in “Uncut Gems.” “Frozen 2,” one of the year’s biggest hits, was shut out of the best animated feature category despite earning strong reviews.

This year’s awards season calendar has shrunk considerably. Recent Oscar shows have aired in late February or early March, with nominations getting unveiled in late January. But the Academy of Motion Picture Arts and Sciences has moved things up by several weeks. There may be a strategic reason for the accelerated timetable. The Oscars have been saddled with lower ratings as the competition for awards show viewers has intensified. Other key awards such as the Screen Actors Guild and the Golden Globes are also televised, with the Globes in particular getting credit for having many buzzy water-cooler moments in its telecast. That’s tarnished some of the Oscars’s shine, though they remain the industry’s most coveted honor.

In a bit of self-promotion, John Cho and Rae announced the nominations from the Academy Museum of Motion Pictures, a costly, oft-delayed look at movie history that is still under construction and carries a reported $388 million budget. It is scheduled to open to the public this year, three years after it was originally supposed to be unveiled.

It’s unclear what the fallout will be from the lack of diversity among top acting nominees. In 2015 and 2016, the Academy fielded back-to-back years of all-white acting nominees, triggering viral  #OscarsSoWhite protests. In response, then-Academy president Cheryl Boone Isaacs announced sweeping changes to membership and voting rules, in a push to get more women and people of color into Academy membership. In the process, the number of people of color within the group doubled from 8% in 2015 to 16% in 2019.

The 2020 Oscars will go host-less for the second time in a row. That may be partly out of necessity. It’s become increasingly difficult to attract A-list emcees. Social media reactions have made the gig a thankless task. In 2019, the Academy tapped Kevin Hart to host, but he stepped down after his past homophobic jokes on Twitter inspired a backlash. ABC will air the Oscars on Sunday, Feb. 9, 2020.