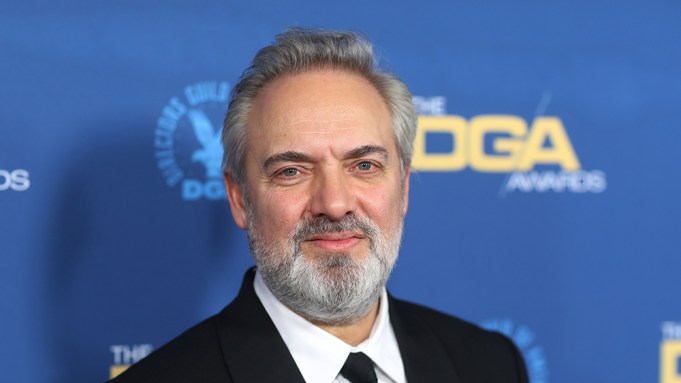 Director Sam Mendes won the top prize at the 72nd annual Directors Guild of America Awards for “1917,” solidifying the World War I drama as the film to beat at the Academy Awards.

“I was fortunate enough to win this award two decades ago,” Mendes said in his acceptance speech, referencing his DGA Awards win for 1999’s “American Beauty.” “And I think if I’m honest with myself, I didn’t feel ultimately like I really knew what I was doing. I feel a little bit more like I do now.”

Mendes also used his speech to praise his fellow nominees — Bong Joon Ho for “Parasite,” Martin Scorsese for “The Irishman,” Quentin Tarantino for “Once Upon a Time in Hollywood,” and Taika Waititi for “Jojo Rabbit” — and laud the chance to get to know them better.

“To hear other directors think and talk — it’s a little like being an alcoholic,” he said. “You realize that everyone else goes through the same problems. It was really inspiring.”

The DGAs are one of the most reliable bellwethers for the Academy Awards — all but seven directors who won the feature film award at the DGAs went on to win the corresponding Oscar, including last year’s winner Alfonso Cuarón for “Roma.” (The last time the two awards diverged, it was when Ben Affleck won the DGAs for “Argo” but wasn’t nominated for the Oscar.)

“Honey Boy” director Alma Har’el won the first-time feature award. After noting that her father was an alcoholic, she thanked star and screenwriter Shia LaBeouf for affording her the opportunity to make a film about the children of alcoholics. Har’el then gave a shout out to Jessica Dimmock, who is spearheading the effort to change the guild’s policy for new and expectant parents.

“We’re counting on the DGA to fight for parents so they can birth the new generation of audiences and filmmakers,” she said.

Steven Bognar and Julia Reichert won the documentary award for their film “American Factory,” over “The Cave,” “Maiden,” “Honeyland,” and “One Child Nation.”

Bill Hader took home the comedy series award for “Barry,” winning over three directors for “The Marvelous Mrs. Maisel” (Dan Attias, Daniel Palladino, and Amy Sherman-Palladino) and David Mandel for the series finale of “Veep.” Johan Renck continued the near unbroken awards season run for HBO’s “Chernobyl,” winning the prize for TV movie and limited series, over three directors for “Fosse/Verdon” (Thomas Kail, Minkie Spiro, and Jessica Yu), Vince Gilligan for “El Camino: A Breaking Bad Movie,” and Ava DuVernay for “When They See Us.”

“At my age, it’s nice to work with someone older than you,” Burrows joked.

Jason Cohen gave Disney Plus its first DGA award for the “Annie” episode of the reality program “Encore!” The winner for children’s programming was Amy Schatz for the HBO documentary “Song of Parkland.”

DGA president Thomas Schlamme opened the evening at the Ritz-Carlton Hotel in downtown Los Angeles with a robust tribute to the power of labor unions, lauding how Hollywood still “runs on unionized labor” in an environment increasingly hostile to union, and citing the DGA pension plan as a paragon of “democratic socialism.”

Schlamme also praised the efforts of the DGA to diversify the ranks of directors beyond white men: According to Schlamme, 50% of all directors working in TV in 2019 were women or people of color, up from 21% in 2014.

Judd Apatow hosted the evening, and opened with an 11-minute monologue that ranged from jokes about impossibly uncomfortable directors chairs to his wish that awards season would include attack ads. One possible ad Apatow pitched to the room: “I could have cut an hour out of ‘The Irishman’ with my eyes closed. I’m Bong Joon Ho and I approve this message.”

The winners are listed below:

David Nutter, “Game of Thrones” (HBO)
“The Last of the Starks”

Movies for Television and Limited Series