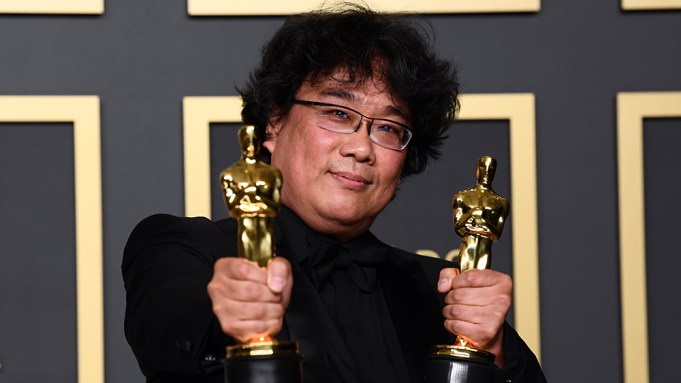 The fire marshal shut down the “Parasite” party at Soho House before the Oscars were even over.

At about 8 p.m., guests arriving to the viewing and after party were asked to give their phone numbers to staff at the door and suggested they grab a bite to eat at BOA restaurant — they would receive texts when more could be let into the party.

Inside, Neon had taken over the private members club. Fake peaches were hung in trees in the garden restaurant. A handful of people turned the peaches into earrings. A large neon “Bong” sign was glowing in the downstairs restaurant. The menu for the evening included Soho House’s usual offerings of salads, salmon and beef, but also Bibigo Kitchen provided Korean dishes, featuring fried chicken, rice rolls, cucumber kimchi and bulgogi and corn cheese egg rolls.

The man of the evening, “Parasite” director Bong Joon Ho, arrived close to 1 a.m. with his cast. He held his Oscar in the air as the party erupted with applause and cheers.

On stage, Neon CEO Tom Quinn said of “Parasite’s” four wins, including the historic best picture win (it’s the first foreign language film to win the top prize), “Tonight, cinema won and put everybody else in check and Bong Joon Ho has been doing this for a long motherf—ing time.”

He added, “This is a win for all of us tonight. We put the rest of the industry in check because cinema won!”

Bong thanked everyone for their support and then said to wild applause, “Let’s drink!”