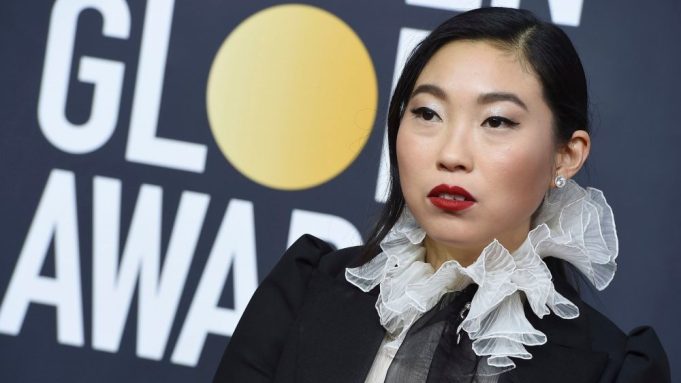 Making Golden Globes history, Awkwafina has won the best actress in a musical or comedy award for her performance in “The Farewell” as Billi, a Chinese American woman who travels back to China with her family to say goodbye to her terminally ill grandmother (Shuzhen Zhao), who does not know she is sick.

The actress took the stage joking, “This is great, thank you. If I fall upon hard times I can sell this, so that’s good.”

She then thanked her family, everyone at A24 and the director Lulu Wang, “You gave me this chance — the chance of a lifetime.”

It’s the first time a performer of Asian descent has won a lead actress Golden Globe Award for a film. Last year, Sandra Oh became the first Asian woman since 1980 to win best actress in a TV drama for BBC America’s “Killing Eve.”

Backstage, Awkwafina commented on the significance of her win. “I just heard that fact and it was pretty mind blowing,” she began. “There’s also this other feeling that you want there to be more, and I hope this is just the beginning.”

She went on to say how “deeply” she connected to the experiences of her character.

“I relate to her mentality a lot,” she said. “A lot of children of immigrants in this country do. We are raised to feel like Americans, and when we go back we’re told we don’t belong there. It’s a constant feeling of being lost in translation, and that’s something that definitely resonated with me.”

When asked about her future involvement with Marvel’s forthcoming “Shang-Chi” picture, the actress remained suitably tight-lipped.

“I’m gonna go do that next,” she said. “I love Destin (Daniel Cretton), I trust him and I think he’s an incredible director. I don’t think I can say more about my character, but I hope she’s awesome.”