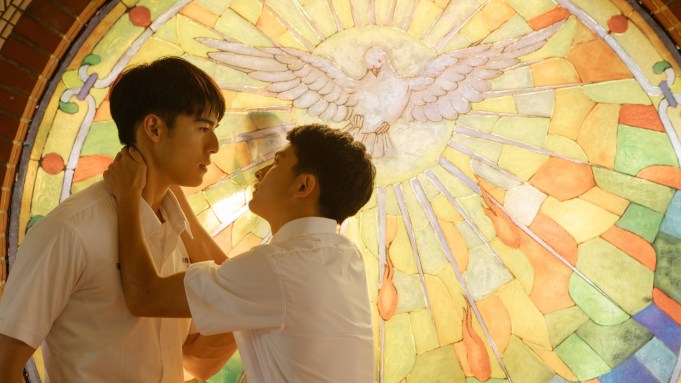 “Your Name Engraved Herein,” the first gay movie from Taiwan since the territory last year legalized homosexual marriage, will enjoy a private screening at Berlin’s European Film Market this week, before having its world premiere at the Osaka Asian Film Festival next month. Presented at the Berlin market by sales agent Flash Forward Entertainment, the film’s trailer can be seen here for the first time.

The executive producer and screenwriter is Chu Yu-Ning, one of Taiwan’s most best-known TV producers. Chu was previously creator of drama series “It Started with a Kiss,” “In Time with You,” and “Back to the Good Times,” and has launched the careers of several of Taiwan’s leading actors.

Directed by Liu Kuang-Hui (TV series “Honey & Clover,” and “Hello Again”), the film is inspired by real incidents, starting in 1988, at a time when Taiwan was emerging from a brutal period of martial law. Two high school students become close but send each other mixed messages. Those misunderstandings are revealed two decades later when the adult men meet again in Canada.

The cast includes Tseng Ching-Hua (Golden Horse Award nominated for “Detention”) and superstar Leon Dai, who plays the 20-years later adult version of one of the characters.

“The movie not only resonates with the rite of passage of LGBTQ rights in Taiwan, but is also ready to bring many viewers to tears. We are expecting the same level of success across Asian countries as with ‘More Than Blue’,” said Patrick Mao Huang of Flash Forward.

Other recent additions to Flash Forward’s Berlin lineup include “Nobody,” a Taiwanese film also recently selected for Osaka and “Summer Knight,” a mainland title that played at last year’s Tokyo festival.

Having introduced Xinjiang-set “A First Farewell” at last year’s Berlin festival, the company is also introducing a trio of Uighur short films: “Friends,” “Alikis,” and “Elephant in the Car.”