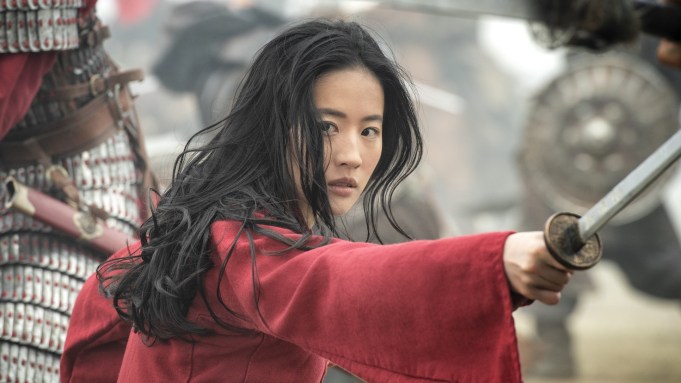 Already tracking poorly in the Middle Kingdom, Disney’s “Mulan” is now the subject of a media blackout in mainland China, where it is set for a theatrical release on Friday. The move appears related to foreign reactions to the film having shot partially in Xinjiang.

Three sources told the Reuters news agency that mainland media outlets had received a notice asking them not to cover the film. Two of whom said it was sent by the Cyberspace Administration of China, while a fourth source at a major Chinese newspaper told Reuters that he received a text message with a similar order from a senior colleague.

The live action re-telling of the Mulan story, which is both a classic Chinese poem and a beloved 1998 Disney animation, was designed for a global audience, but with one eye firmly on the Chinese market. It stars American-Chinese performer Liu Yifei (aka Crystal Liu), Donnie Yen and Gong Li in prominent roles. It shot principally in New Zealand, director Niki Caro’s home country, and partially in China.

“Mulan” had been scheduled for a worldwide release in March this year. But that plan, and other attempts to find a planet-wide outing were all scuppered by the coronavirus pandemic and rolling cinema closures. In recent weeks Disney took the decision to favor its newly-launched direct-to-consumer streaming service Disney Plus and give the film a premium VOD launch in territories where it is operational. That left several markets in Asia including Thailand, Singapore, Taiwan and crucially Mainland China as theatrical release territories.

While box office numbers in Singapore and Thailand are far from shabby, the opening in China looks weak. As of 8pm Thursday, pre-bookings for the film’s opening day amount to $1.70 million (RMB11.6 million), according to ticket sales agency Maoyan. That would place it on top of the chart, but with a gross that is distinctly soft.

Despite China now being the only major film market to have returned to near normality, according to one analysis firm, the prospects for “Mulan” in the People’s Republic began to diminish quickly. Several factors may be at play.

Considered an import, rather than a co-production, “Mulan” received its official Sept. 11 release date only 10 days ago, giving it little chance to build a strong marketing campaign. That date put it squarely in competition with “Tenet” and China’s best performing film of the year “The Eight Hundred.”

It also put the “Mulan” theatrical outing in competition with pirated copies, that appear to have been ripped from Disney Plus streams in other countries. Within hours of the film’s Sept. 4 online premiere, “Mulan” was the top title on at least three torrent sites that Variety visited.

The film’s end credits, as seen in Disney Plus territories, reveal that the film shot partially in the Xinjiang region, as well as the filmmakers’ fulsome thanks to Xinjiang authorities, including the Turpan Public Security Bureau, and various publicity departments of the Communist Party of China.

Xinjiang is the large state in West China where the government is alleged to have incarcerated a million Muslims mainly of Uighur origin, and to have operated other assimilation programs. The Chinese authorities have frequently insisted that what Western governments have identified as prison camps are in fact vocational training facilities.

The recent furor over the film’s Xinjiang connection has caused a storm of bad publicity on social media, and a stiff letter from U.S. Senator Josh Hawley to Disney chief Bob Chapek.

Hawley claims that Disney ignored reports from U.S. government sources and from NGOs describing the human rights abuses in Xinjiang. “[These] did not stop Disney from going to Xinjiang to film ‘Mulan.’ Nor did it stop Disney from collaborating with the Chinese officials directly responsible for the atrocities at those camps,” Hawley said in a Wednesday letter.

On Wednesday, state-controlled tabloid newspaper The Global Times said the ‘Mulan’ backlash was “another manifestation of the extreme ideologies regarding China among U.S. public opinion.” Within China, the state media blackout suggests that the government wants to simply shut down the discussion.