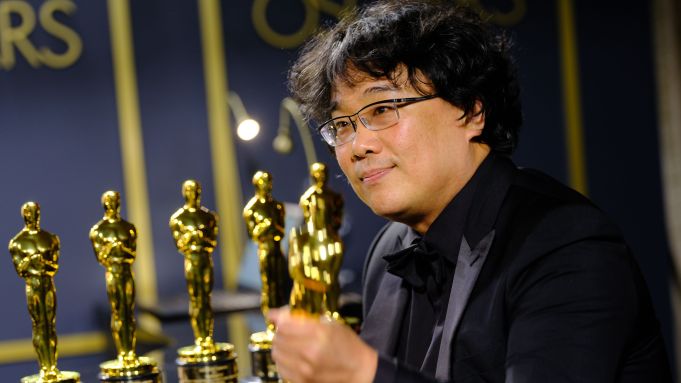 After weeks of awards campaigning and hundreds of interviews, “Parasite” began Sunday as a successful and well-appreciated movie. Yet its Academy Awards wins for best picture and for Bong Joon Ho as best director were shocks that thrilled the Asian movie industry.

“I’m so happy for all the Asian Film industry. It has now created bigger dreams for Asian filmmakers,” said Korean producer Jonathan Kim. “Now I have a different view on Hollywood. Even Hollywood is becoming more open minded.”

“Game changer!!! So happy for all of us. The Asians have finally arrived in Hollywood!” said Andrew Ooi, president of Echelon Talent Management, a Vancouver-based management firm with a predominantly Asian clientele.

Park Chan Wook, one of South Korea’s top filmmakers and a producer of Bong’s “Snowpiercer,” said in an interview with local media that the Oscar success of “Parasite” is not a surprise.

“[This] means that American members of the Academy have changed the way they see and value different culture, languages and races. The wall that had stopped ‘Parasite’ from being correctly appreciated is now gone and that the film finally received the appreciation it deserves,” said Park. “’Parasite’ is a film that all Koreans, including [big business], politicians, working people and even those who are jobless, have worked together on. We all richly deserve to celebrate ourselves.”

South Korean President, Moon Jae In posted a congratulatory message on Twitter, writing that the film had given “South Korean people pride and courage as they try to overcome the challenging time [of the coronavirus outbreak].”

For many in Asia, the award was a well-deserved prize for a brilliant and imaginative director who had been known regionally, but not on a world stage, perhaps for a pesky technical problem.

“The Oscar win by ‘Parasite’ is as stunning as it is historic. It is a tremendous achievement for both Bong Joon Ho and Korean cinema as a whole. But its biggest contribution going forward may be to break apart many viewers’ preconceived notions about the so-called ‘limitations’ of subtitled films,” said Darcy Paquet, Korean cinema historian, former Variety correspondent, and author of the film’s subtitles.

No subtitled film has won the Oscar’s best picture award in nearly a century. That point was underlined by Thai film critic Kong Rithdee, who echoed Bong’s Golden Globes acceptance speech, in which the director referred to “the one-inch-tall barrier of subtitles.” Rithdee said that Hollywood elites “gasped with embarrassment and sudden realization” when they understood that Bong was pointing his finger at them.

For some commentators, this was a case of individual brilliance. “There are few directors in the world who receive prizes at film festivals and cater to commercial tastes,” film critic Jeon Chan Il told Korean news agency Yonhap. “Bong’s definitely become one of the top filmmakers in the world.”

For many others, the four Oscar haul is a justification, and necessary catch-up for, the wider South Korean film industry. Korean filmmakers, including Bong, Park Chan Wook, Kim Jee Woon, Lee Chang Dong, and Hong Sang Soo, have led the way in Asia and on global the festival stage for two decades, but the country had not previously received even a single Oscars nomination.

“We never write to represent our countries. But this is very first Oscar to South Korea,” said Bong on stage after receiving the award for best original screenplay. “As there is Hollywood in the U.S., in Korea we have Chungmuro (the old heartland of Korean cinema). I’d like to share this honor with all the storytellers and filmmakers at Chungmuro.”

Coincidentally, the Seoul Metropolitan Council, announced that it had begun construction work on a cinematheque, museum and archive complex that will open in Chungmuro in 2022.

Still others said that the “Parasite” wins were a victory for diversity. “In this year of all years, with Trump, and racism still so prevalent, this a such a vindication,” said Maria Chan, producer.