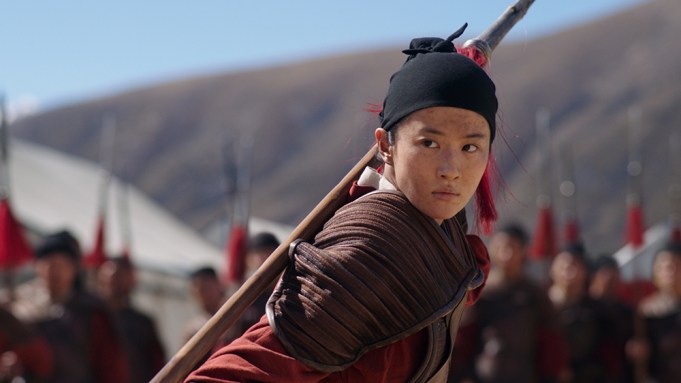 Disney’s Chinese-themed “Mulan” got off to a soft start on its debut in mainland China theaters on Friday.

On opening day, the Niki Caro-directed film clocked up $8.05 million (RMB55.0 million), according to data from film ticketing agency Maoyan. That made it the top grossing title on Friday, with a 44% market share.

Behind it, Chinese blockbuster “The Eight Hundred” placed second with $5.52 million (RMB37.7 million), while “Tenet” dropped to third place on day eight of its China release, scoring $2.11 million. “Tenet” now has a cumulative total of $42.5 million (RMB293 million).

With many other countries getting “Mulan” as a premium VOD offering on Disney Plus, China may end up as the film’s highest grossing theatrical territory. But “Mulan” may struggle to beat “Tenet” in China. Maoyan is currently projecting that “Mulan” will achieve a lifetime gross of only $45.5 million. (By comparison, “The Eight Hundred” has amassed $373 million after 22 days in Chinese cinemas.)

That total would be a significant disappointment for Disney and the filmmakers, who had once aspired to “Mulan” becoming the highest grossing film ever directed by a woman, and for the film to do well in China. Casting included American-Chinese performer Liu Yifei (aka Crystal Liu) in the title role, and Donnie Yen, Gong Li and Jet Li in prominent roles.

But the coronavirus and spiralling political problems meant multiple delays to the scheduled release, giving time for the film to become frozen into the Cold War that’s icing up U.S.-China relations.

Considered as an import, rather than a co-production, “Mulan” received its official release date only 11 days ago, giving it little chance to build a strong marketing campaign. It also put the theatrical outing in competition with pirated copies, that appear to have been ripped from Disney Plus streams in other countries.

In recent days, both Disney and the film have been lambasted in the West for shooting partially in the controversial Xinjiang region, where China is accused of large-scale human rights abuses. U.S. Senator Josh Hawley escalated the matter further with a letter in which he accuses Disney of ignoring U.S. government and NGO warnings about Xinjiang and “collaborating with the Chinese officials directly responsible for the atrocities.”

Chinese authorities have long denied the Western narrative about Xinjiang and this week ordered state media to sidestep the controversy by not reporting on the film.