Octavia Spencer: Her Journey From Secret Actress to the Small Screen

Academy Award-winner Octavia Spencer is taking the lead on the small screen, producing and starring in “Self Made: Inspired by the Life of Madam C.J. Walker.” In Netflix’s four-part limited series, Spencer plays the unlikely entrepreneur, a widow and single mother who became the world’s first female self-made millionaire. Here’s a glimpse at the life and career of one of our most beloved stars.

Secret Actor
Growing up in Alabama, Spencer had dreams of performing, but her mother urged her to pursue a more practical path. That led to her working in the casting department of films being shot locally. It was for 1996’s “A Time to Kill” that she finally worked up the nerve to ask for an audition — she wanted to be an angry bystander who starts the riot, but director Joel Schumacher said she was too “sweet-looking” and had her audition for the role of Sandra Bullock’s nurse. Spencer landed the part.

Spencer moved to Hollywood in 1996, and began stealing scenes with little screen time in films including “Coach Carter” and “Win a Date With Tad Hamilton!” In “Bad Santa,” she only had a few lines, but one was so memorable (and too filthy to print) that her character returned for the sequel.

I had the honor of being the first person to interview Spencer for Backstage West in 2005, something she has kindly always remembered. At the time, she was getting used to being recognized in public and seeing her quips used in ads. “I realized I was always getting the good lines when I would see them in the trailer,” she said then. “My family would get excited, thinking I had a big part. I had to tell them, ‘If you’ve seen the trailer, you’ve seen my part.’”

In 2003, I had the pleasure of catching a play in Los Angeles,
Del Shores’ “Trials and Tribulations of a Trailer Trash Housewife,” a four-person show about an abused woman living in a trailer park. The theater held fewer than 75 seats and the stage couldn’t have taken up more than 30×30 feet, barely enough to contain all the brimming star power on stage: the cast included future Spirit Award winner Dale Dickey and Beth Grant, who has gone on to become one of our most beloved character actors. Spencer made her stage debut as the best friend of the title character, and even then, it was obvious she was a star. With her wide, expressive eyes and ability to snap off one-liners like a Gatling gun, she was a natural-born scene-stealer. She later reprised the role for the film adaptation. Shockingly, that was Spencer’s first and, to this date, only, play.

The Turning Point
Spencer reportedly beat out some Oscar-nominated names to land the coveted role of Minny in the film adaptation of the bestselling book “The Help.” It probably didn’t hurt that author Kathryn Stockett based the role loosely on Spencer, after meeting her through mutual friend Tate Taylor — Spencer’s former roommate and the film’s director. (In the novel, Minny even has a sister named Octavia.) But Spencer was quick to dispense the notion that the character was based too much on her. “That would be a disservice to Kathryn, who built this amazing character,” she said at the time, while admitting they have some things in common. “I say it jokingly, but it’s true: Minny is short and round; I am short and round. Minny speaks her mind all the time; I don’t have a problem speaking my mind.”

Spencer won an Oscar for the role, then found herself nominated for two other big crowd-pleasers: playing scientist Dorothy Vaughan in 2016’s “Hidden Figures” and a cleaning woman in a secret government laboratory in 2017’s “The Shape of Water.” Interestingly, all three films are set in the 1960s. And Spencer herself has joked about the trajectory: “I played a maid, then a scientist, then a cleaning woman at a science lab.” But Spencer also brought intricate layers to all the characters, women who were all ahead of their time. 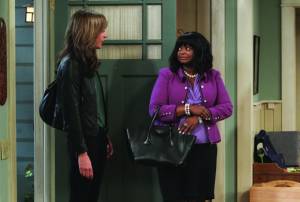 Spencer has dabbled in television before; after winning the Oscar she performed an arc on “Mom” as a recovering alcoholic opposite her good friend Allison Janney. In 2014, she starred in the Fox series “The Red Band Society,” which counted Steven Spielberg among its producers. She also produces and stars as an investigative reporter/podcaster in the Apple TV series “Truth Be Told,” which has just been renewed for a second season.

She hosted “Saturday Night Live” in 2017; something she once said she was too terrified to do. She excelled on the show for the same reason she stood out in so many movies — her total commitment to every moment, her naturally engaging personality and her willingness to try anything. Highlight: as a trainee at a Sticky Buns shop, she’s told to make conversation with the customers, causing her to blurt out to one: “Do you like being white?”

Behind the Scenes
One of the charitable organizations Spencer is involved with is City Year, a member of the AmeriCorps network, designed to help students and schools. Spencer is on its L.A. board and spoke about them in her 2017 Variety’s Power of Women speech, thanking them for “your commitment to education and for helping to keep at-risk students in school and on track to graduate.”

She added: “City Year’s work … brings to mind Robert Kennedy’s inspiring words: ‘Each time a man’ — and I would offer, or woman — ‘stands up for an ideal or acts to improve the lot of others or strikes out against injustice, he sends forth tiny ripple of hope.’ I’d like to thank City Year for your ripples in society’s ocean. Because in my mind, a sound education can turn the tides of poverty.”