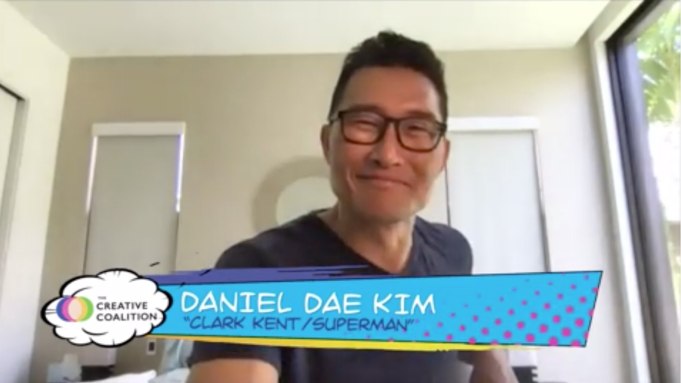 Courtesy of the Creative Coalition

It’s a bird, it’s a plane, it a dream come true because Daniel Dae Kim is Superman! After DC FanDome’s wild ride of announcements and special panel presentations, Variety is debuting the exclusive video from the celebrity-filled charity re-recording of the 1940s Superman radio specials.

Television and film stars Jason Alexander, Henry Winkler, Giancarlo Esposito, Tony Shalhoub, Alfre Woodard, CCH Pounder and more gathered together to support the Creative Coalition with this special performance. Using original scripts from the decades-old Superman radio series, which was recently revived from the Warner Bros. Studios vault, this unique vision of the Man of Steel portrays him in a new and exciting way. Each episode provides a fresh translation with a new cast of actors for each role. For example, both Wilson Cruz and Kim get their chance to shine with the red cape, and even Tim Daly (longtime voice of Clark Kent/Kal-El) reprises his role from the past.

But a special shoutout must be paid to René Ruiz, the sound effects creator who truly helps this radio experience shine. Watch the full video above (annotated time stamps of each new episode and cast list provided below).

The Creative Coalition a nonprofit organization that works to ensure continued funding for the arts. The coalition (run by president Tim Daly who makes reprises his role as superman for this very production) is “dedicated to educating, mobilizing, and activating its members on issues of public importance.”