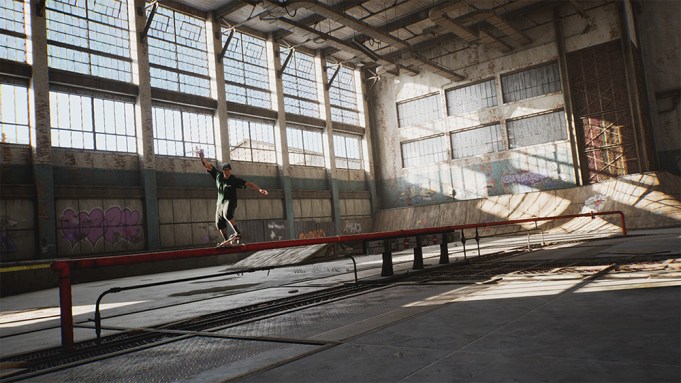 “Tony Hawk’s Pro Skater” has a long — and occasionally rocky — history. When its first installment was released in 1999, its smooth controls, impressive physics and classic punk rock and ska-infused soundtrack captured the attention of a generation of burgeoning skateboarding fans and spawned a full-blown video game franchise.

But some of the recent entries have been, well, less well-received. So when Activision announced in May that it was returning the series to its roots, remastering “Tony Hawk Pro Skater 1 + 2,” the internet, unsurprisingly, rejoiced.

For the remaster, Activision reteamed with Vicarious Visions, a developer with extensive history with both the “Tony Hawk’s Pro Skater” franchise and remasters in general. Variety talked to Vicarious Visions COO Simon Ebejer about what to expect when the game’s released on Sept. 4.

When a video game title is revisited, there’s often a number of questions that follow: Is it a remake or a reboot? How closely does it keep to the original? In the case of “Tony Hawk’s Pro Skater 1 + 2,” Ebejer made it very clear that it should feel very familiar to fans from the ’90s — with a few new additions. Vicarious obtained the original handling code from Neversoft, the late studio that developed “Tony Hawk’s Pro Skater,” brought it into its engine and re-arted it all in 4k, bringing back all 19 original levels.

“It’s a really faithful remaster with tight handling, the core mechanics, all the levels will feel the same,” Ebejer says. “It should feel like what the nostalgic players expect.”

So What Is New?

“One of the challenges of doing a faithful remaster is knowing where to push the boundaries and what to keep sacred,” Ebejer admits. “It’s important to capture the original experience that we’ve been talking about, but still have room to modify things to appeal to today’s audience.”

Ebejer said Vicarious wanted to look “holistically” at the “Tony Hawk” series and deliver on the nostalgia, but include what he identified as quality-of-life upgrades that came later in the franchise. Revert, which was first introduced in “Tony Hawk’s Pro Skater 3” and makes it easier for players to link combos together, will be in the remaster, as will flatland tricks. It also boasts online multiplayer (in addition to local split-screen), and a more robust Create a Skater and Create a Park editor, with players able to share their parks online.

Almost All of the Original Soundtrack Is Back

It’s hard to talk about “Tony Hawk’s Pro Skater” without talking about that soundtrack, with tracks from Goldfinger, Rage Against the Machine, Dead Kennedys and more, and Vicarious realized how important that was in bringing the games back to life. Luckily, all but five songs (previously identified by Kotaku) have made it in.

“We did fall short on a couple of them because, you know, it’s 20 years later and sometimes licencors or copyright holders couldn’t be tracked down, or there might have been a dispute as to who might have been the rights holder,” Ebejer says. “But for the most part, when [the original artists] found out about this game and us remastering it, they were excited to be a part of it.”

The Roster’s Back Too (but They Look at Little Different)

The remaster managed to get all 13 skaters from the original roster to come back — but for the new take, Vicarious has them at the ages they’re currently at IRL. That means many of the original skaters will be hitting the parks in their 40s and 50s, reflecting the fact that their fanbase has grown up alongside them, too. Ebejer says the team threw around several ideas in discussing what to do with the roster in making the game, but in the end, “it just felt right to have them be their current selves,” adding that that’s what Hawk was interested in doing as well.

It’s Officially Coming Out This Fall