Continue to Variety SKIP AD
You will be redirected back to your article in seconds
Nov 19, 2020 4:30am PT

Amazon Kids Plus has picked up its first original production: “Super Spy Ryan,” a special featuring the star of the massively popular Ryan’s World kids’ franchise.

The half-hour hybrid live-action/animated show comes from Pocket.watch, the exclusive studio partner for the Ryan’s World franchise, and Sunlight Entertainment, the production company run by the family of 9-year-old Ryan Kaji.

It’s the first time Amazon Kids Plus, the ecommerce giant’s subscription service for parents and children, has worked with a creator to launch an original long-form show. “Super Spy Ryan” will stream exclusively on Amazon Kids Plus starting Nov. 27 in the U.S., U.K. and Canada, followed by Germany and Japan in December.

With Ryan’s millions of fans, the deal for “Super Spy Ryan” promises to provide a lift to Amazon Kids Plus, which gives kids access to thousands of books, educational apps, TV shows and more. 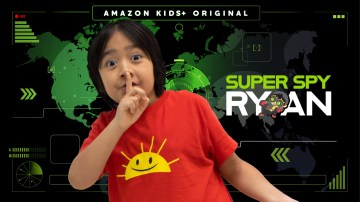 The deal for “Super Spy Ryan” is something of an experiment, said Kurt Beidler, GM of Amazon Kids, who added that it’s TBD whether the service will add more originals. “We’re always looking for stuff that’s entertaining and educational for our audience. Kids love to see their favorite characters in all forms,” he said. “We hope families will have fun watching Ryan’s latest adventure together over the holiday.”

In “Super Spy Ryan,” Ryan is transported into an animated virtual world where he and his friends must become the ultimate super spies. After a glitch in the virtual world turns all of Ryan’s friends into babies, the team’s mission is to recover the precious Golden Console from the clutches of a new character to the Ryan’s World universe: The nefarious Packrat, who is actually a hamster. The show’s live-action scenes feature Ryan and his family and the anime-style animation includes Ryan’s signature avatar and characters in his animated world.

Amazon Kids Plus will not explicitly promote the toys in the “Super Spy Ryan” special. That said, the combination of content and commerce in this case is unique, said Pocket.watch founder and CEO Chris Williams. “Amazon is the only brand that can host both the content and products at once,” he said.

According to Pocket.watch, Ryan’s World consumer products generated over $200 million in retail sales across 24 countries in 2019 — and the company expects an even bigger merch haul this year.

Pocket.watch plans to create additional content based on “Super Spy Ryan” for YouTube and other platforms, but “In this particular case, Amazon has the hero piece of content. The most premium expression of the franchise is only on Amazon Kids Plus,” Williams said.

Amazon doesn’t disclose how many customers it has for the Kids Plus service. To date, over 20 million parents have used Amazon Kids (which is free) and Amazon Kids Plus (priced at $2.99/month for Prime members and $4.99/month for non-Prime customers), according to the company. The services previously were called Amazon FreeTime and FreeTime Unlimited, respectively.

“Bringing ‘Super Spy Ryan’ as the first original on Amazon Kids Plus is a dream come true for us,” said Shion Kaji, Ryan’s father and founder of Sunlight Entertainment. “We’re so grateful for the support we’ve received from Ryan’s fans around the world, and are excited for kids to follow Ryan on this brand-new adventure, ‘Super Spy Ryan.'”

Ryan’s World videos and content are also distributed via the Ryan and Friends streaming channel, which launched in September. In addition, he’s featured in Nickelodeon’s “Ryan’s Mystery Playdate,” which has run for three seasons on the cabler. And this year’s TV-only Macy’s Thanksgiving Day Parade will feature a balloon based on Ryan’s alter-ego character Red Titan, making him first YouTube creator to be featured in the parade’s 94-year history.

Pocket.watch in 2017 originally inked a deal with the Kaji family to manage Ryan’s YouTube channel and develop brand extension.