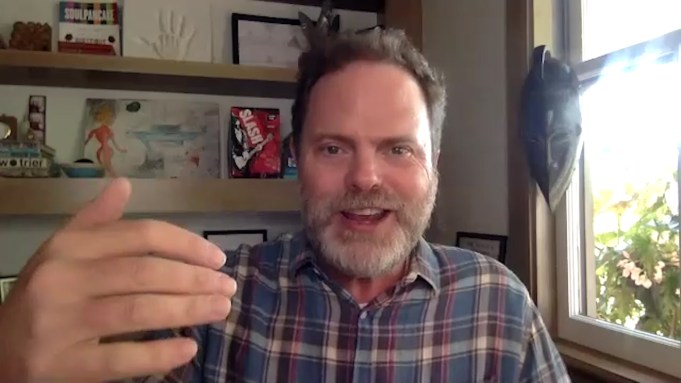 Rainn Wilson has made the pivot from a “slacktivist” to a full-on fighter for a more sustainable future – and through his YouTube series “An Idiot’s Guide to Climate Change,” “The Office” star hopes to inspire others to do the same.

In the six-episode series, from his digital media company SoulPancake, Wilson experiences the effects of climate change firsthand in Greenland and explains them in a way to help educate the average person. During the first episode of Variety‘s Sustainability in Hollywood event presented by Toyota Mirai, Wilson talked with film and media reporter Angelique Jackson about the purpose of his show, meeting Greta Thunberg and why every person matters in the fight against climate change.

“Climate change is something that I have been passionate about for years… but the extent of my activism around climate change was an occasional angry tweet. And I realized like ‘Listen, Rainn, you have to get off your butt and actually do something more if you want to make a difference, however small,'” Wilson said. “So this show was kind of the first step. It was me, ‘the idiot,’ learning about climate change, taking the audience, also maybe idiots, on the journey to learn a little bit more about it in a fun, accessible, funny, kind of a low-key DIY way.”

Wilson aims to utilize his far-reaching audience from “The Office” to communicate that climate change is real to young people who may not have access to the correct information.

“SoulPancake is an amazing company in that it’s about 50/50, red-state, blue-state audience. And so much stuff about climate change is simply people in a bubble, in an echo chamber all talking to each other about climate change and not reaching other people,” Wilson said. “One of the things we wanted to do is reach young people who might be Dwight Schrute fans, ‘The Office’ fans, who maybe are on the fence about climate change…That’s the target audience.”

With the help of science, stunning locations and a healthy dose of humor, Wilson is motivated to alter the narrative that climate change is an issue only wealthy, liberal-minded people should care about.

“One of the conservative talking points – not just about this, but about everything – is these coastal elites, these latte sipping, Tesla-Prius drivers on the coasts, judging everyone else and lecturing to them,” Wilson said. “Believe it or not, I think there’s a lot of truth to that. I think that people in the entertainment industry can be very judgmental and self righteous and luxurious. And we have to stop that, you know, we have to build bridges. We have to lead with kindness.”

Wilson also featured guests on the show who are leading the movement, including 17-year-old climate change activist Greta Thunberg, who he described as “indefatigable.”

“The thing about Greta is her heart is so pure, she doesn’t care about any personal gain or glory. She lives in this tiny little house in Sweden. They don’t have much; she’s not profiting,” Wilson said. “She has the voice that people listen to, she’s leading a meeting with heads of state. She’s meeting with companies. One of the things I discovered on this journey is how many young women are taking charge and leadership in on this issue. It’s astonishing and it’s so exciting to see these strong, powerful articulate, young women being thought leaders in this space.”

Wilson used one of his favorite quotes from Dr. Seuss to describe how necessary each individual is to creating a more sustainable future: “Unless someone like you cares a whole awful lot, nothing is going to get better. It’s not.”

And that’s exactly Wilson’s mission, because without widespread awareness of climate change, nothing will be done to stop it.

“We start with caring, and we move to action,” he explained. “That’s the only way to do sustainability.”

Together, they discussed why it’s so important for the film and television industry to have more sustainable practices, and what their respective companies are doing to further the charge.

“For more than 10 years, the major studios have been collaborating to accelerate the adoption of sustainable production best practices. We’re known as the Sustainable Production Alliance because our group has grown tremendously,” Bart said. “We now include the streamers and smaller production companies and, through a partnership with the Producers Guild of America, we created greenproductionguide.com, which is a free resource to help productions measure and reduce their environmental impacts.”

These best practices include using LED lighting on sets, reducing single use plastics, donating extra food and materials, and buying sustainable lumber for building sets. To make sure all its sets are eco-friendly, Kindberg said, HBO is launching the HBO Green program.

“HBO Green outlines some specific impact categories that we address, which are fuel, energy, materials, waste, community, and onscreen. And around those are some goals and policies that the shows have to adhere to,” Kindberg explained.

Although each network has their respective programs, it is imperative that they all work together to make sure being sustainable on set is as easy as possible.

“The best way to do that is, when they go from Sony to NBC to HBO, is for us all to talk to them in a common way and all expect common things in partnership with them,” Rego said. “And that’s what’s been really effective… is for us work together so we’re not giving different messages or talking about it in different ways to the same people, but working as one as we’re trying to make progress, lowering impact and finding new solutions to bring in to productions.”

Watch the full episode below.