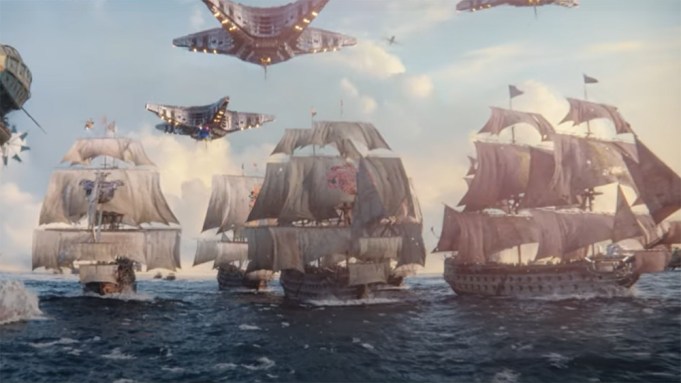 Sony Interactive Entertainment released its latest spot for the PlayStation 5 on Monday, the second in its global marketing campaign leading up to the new console’s launch.

The ad, dubbed “The Edge,” shows a young man in a fishing boat riding through the sea before he’s seemingly transported to a more mythical version of the world, joined by a bevy of different types of boats and air vessels. Galvanized, he charges his boat through a barrier of water, followed by his new fleet.

It’s a spot that could be mistaken for a movie trailer — until the end, where PlayStation’s new global tagline, “play has no limits,” surfaces, in addition to the PlayStation logo. It’s a similar approach to the one that was taken with the first spot that debuted last month, which showed a young woman on an adventure through various environments, and one that’s purposely focused on the brand rather than PlayStation’s IP or new features, according to global head of marketing Eric Lempel. The purpose, he says, is to “evoke some of the feelings you would get from PlayStation 5.”

“It’s really just talking about who we are as a brand and exciting and thrilling our fans,” Lempel tells Variety. “We want to excite and thrill you. We want to show them a path to the mysterious unknown… what you’re seeing is them coming to the edge and then going beyond. And really, that’s what we’re trying to signal here. It’s not about the features. It’s a brand spot.”

He does, however, note that “you’re going to see a lot of the games start to play into these campaigns very quickly” as the next-gen console gears up for launch (a price and release date for the PlayStation 5 beyond holiday 2020 have not yet been announced).

Luckily, unlike the first spot, “The Edge” was shot before the coronavirus pandemic shut down most productions and corporate offices. But Lempel acknowledges that the pandemic restrictions have, unsurprisingly, “been challenging on almost every front” in terms of their marketing strategy.

As COVID-19 has forced production shutdowns across film, TV and commercial shoots, it’s become increasingly difficult to produce something like “The Edge.” The first spot, in fact, was made after the pandemic forced widespread lockdowns, and had the actor performing some scenes from their apartment while CG was added around her. But it also takes a hit at some of the most valuable real estate in a gaming marketing campaigns: live, hands-on activations.

“Normally, when we go into market with a new console – and we don’t do that often, it might be once every six or seven years – we like to give people the opportunity to touch it, to see it with their own eyes, to play around with it,” Lempel says. “I like where we’re going with our advertising and I like what we’re conveying, but you really won’t get the full experience until you touch it. That’s been an incredible challenge, so we have pivoted some of our communication to really try to strongly evoke the feelings you’ll get from using the console, and that was what our first spot was all about.”

The newest spot, which debuted on Variety exclusively, can be viewed above.