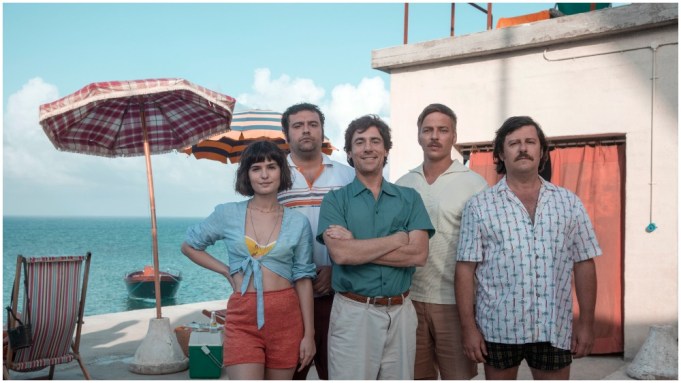 In 1968, idealistic Italian engineer Giorgio Rosa founded an independent micro nation on a tiny island he built on a platform supported by steel pylons off the coast of Rimini, Italy, outside Italian territorial waters. He named the platform — which had its own bar/restaurant, post office and radio station — the Republic of Rose Island.

This anarchic act is the subject of “Rose Island,” a dramedy rooted in real history marking the first Netflix International Original film out of Italy. The streaming giant worked closely with director Sydney Sibilia and production company Grøenlandia (“The First King”) to shepherd the picture, conceived from the outset for an international audience. The film stems from Netflix’s stepped-up drive under David Kosse, vice president of international film and Teresa Moneo, director of international film, to produce and acquire significant non-English language titles with worldwide appeal.

Partly shot in Malta, “Rose Island” boasts a top-tier European cast comprising Germany’s Tom Wlaschiha (“Game of Thrones”) and France’s Francois Cluzet (“Untouchable”) alongside Italy’s Elio Germano (“Our Life”) in the titular role. “Rose Island” will drop on Netflix globally on Dec. 9. Ahead of its release, Variety spoke exclusively with Teresa Moneo and producer Matteo Rovere about their collaboration on the project.

Matteo, how did “Rose Island” originate and how did Netflix help bring it to the screen?

Rovere: From the outset, this is a story that seemed to us to have a universal appeal. One that could resonate not just locally but internationally. Jokingly I could say that, in a way, Giorgio Rosa changed the world. He not only changed a major [international law] on extra-territorial confines, he also helped shape the vision of a Utopia that in those years has been narrated in so many different ways.

With Teresa, we started a dialogue where we drilled down on the screenplay in its initial stages with the idea of making the film more understandable to a broader international audience. The story of course has some fascinating elements having to do with this vision of Utopia that can appeal to an international audience. In this respect, Netflix has been a key partner, since the film is narratively quite complex.

Moneo: We got on board on the first draft of the script. I was really enchanted by the story itself, of which I knew nothing beforehand. Obviously it did feel like it was a footnote in history. It did feel to me that even though it was very unique, it encapsulated the archetypal narrative of a bigger character and this notion of the underdog: the little guy that could. It felt like it could bring forward a broader story.

In my first reading of the script the most amazing thing for me was all the things that I just could not believe were real. I kept saying to myself: ‘This cannot be real!’ But all the very specific facts were really all true. That was the most amazing thing. The deeper we dug into the reality of it, the more the most incredible facts were true. For me it’s really important that it was a true story that could encapsulate an era and a time, and also have an emotional throughline.

Was the pan-European cast always part of the plan?

Rovere: The real story of Giorgio Rosa naturally has within it characters who came from different European countries, so we always imagined it as a pan-European story. It was a natural to have European actors involved since Rosa took his case to Strasbourg [the European Court of Justice], so there is a whole French component. Having Tom Wlaschiha, who is a hot young German actor and speaks Italian in the film, was also a natural choice. With Netflix, we were able to assemble a dream cast obviously on the Italian side as well, where we have Elio Germano, Fabrizio Bentivoglio, Luca Zingaretti [Montalbano].

Moneo: We worked on both the script and the casting very closely. Elio [Germano] was always on the project, and he was really the anchor in terms of the casting. It was an organic process. [The film] needed characters and actors from other countries, so we just thought it was a great opportunity to bring actors that could really up the level of the film as a whole.

In terms of physical production I imagine the most critical aspect was building the island?

Rovere: Yes, and the solution wasn’t easy. We had to build this huge steel structure that had to accommodate both talent and crew. In this case Netflix with their physical production experts, besides Teresa, gave us a hand in figuring this out. We opted for the Malta Studios infinity pool [exterior water tanks situated along the coast, on the water] which are huge studios and we built the entire island inside the pool. We were able to replicate Giorgio Rosa’s idea and shoot it entirely in the sea. Sydney wanted the island to really be surrounded by water.

Moneo: I think that this is where our marriage has really worked, in a way. In the sense that, for an idea this big, you really have to have an alignment of all the different aspects of the production. It’s about having a production plan that mixes actual production design with VFX.

Are you at liberty to disclose the budget of the film?

Moneo: We don’t really like to disclose budgets but it’s clearly on the larger scale. You can see it. It’s a film that was done properly, with the right resources, including the music.

Yes, I was going to ask: Jimi Hendrix, The Kinks, an Italian cover of “California Dreaming.” You really went to town on the music.

Rovere: The relationship with Netflix is great because throughout the production we were helped by Netflix with an Anglo-Saxon know-how that is a bit different from our own. It’s an intercultural film, even from a production standpoint. One aspect of this was the amazing music supervisor that Netflix suggested.

Moneo: The music point is one of the aspects where Netflix coming in has allowed [us] to elevate the ambition of the film. Same as the casting. These are the two aspects that have really had an impact on the creative vision.