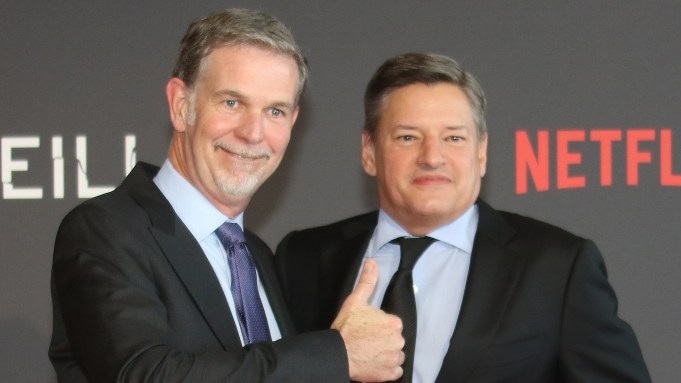 Netflix bid farewell to several senior programming executives in recent weeks — and the company’s two co-CEOs, Reed Hastings and Ted Sarandos, maintained that the turnover is business as usual for the streamer.

Sarandos, Netflix’s chief content officer who was elevated to co-CEO in July, was asked about the recent executive churn by Barclays Capital analyst Kannan Venkateshwar on the company’s third-quarter 2020 earnings interview.

“I restructured the content team to be more like our film team, and more like our animation team, and have one global organization,” Sarandos explained. “And to run that I tapped Bela Bajaria, who has been with Netflix for a long time.” He said that “whenever you put new change at the top, there’s some downstream effects as well.”

Hastings, chairman, co-founder and co-CEO, said Netflix’s Keeper Test is a “normal model” to retain the best talent. The Keeper Test, as Hastings has described it, is to ask the question about an employee, “Would you keep the person if they wanted to leave?”

“No one gets to keep the job for free. You know, you’ve got to earn it every year, which is intensely challenging and we all love that part of it,” Hastings said.

Hastings wrote about the Keeper Test in his recently published book, “No Rules Rules: Netflix and the Culture of Reinvention,” detailing the company’s unorthodox management principles. In an interview with Variety, Hastings recalled applying the Keeper Test with CFO David Wells, whom Hastings described as a generalist but not “hungry” for entertainment. “He had done great work for us for a decade. I realized, if he resigned, I would look at it as an opportunity to get an entertainment CFO, who loves entertainment,” Hastings said in the interview.

Neumann immediately quipped: “I thought I was going to get a keeper test right here.”