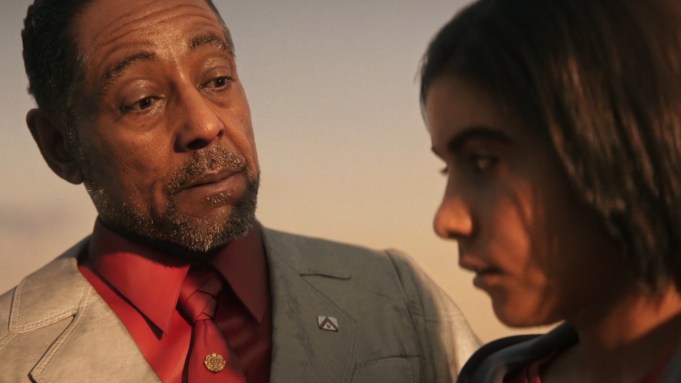 “He’s in the middle of, unfortunately, a revolution. He’s trying to empower the people to understand that they need strong leadership now,” Esposito tells Variety. Players will experience the seventh installment of the open-world first-person shooter video game franchise as a local fighter trying to take down Castillo. The game, published by Ubisoft, is slated for release on Feb. 18, 2021 and was previewed during Ubisoft Forward, the company’s showcase event on Sunday.

The comparisons between Castillo and Esposito’s “Breaking Bad” and “Better Call Saul” character Gustavo Fring seem inevitable, as they resemble each other in both ruthlessness and accent. And like Fring, Castillo is a complicated character with a layered backstory that involves being born to a dictator and enslaved as a child. He is now angling to pass on power to his young son Diego, played by “Coco’s” Anthony Gonzalez.

“[Antón], although being born with a silver spoon in his mouth, was unable to rule until the revolutionaries that ousted his father were put away,” Esposito explains. “We meet him at a time where he’s trying to empower his son to take up his mantle and really embrace ideas that would allow him to see that soon he will probably be the next leader in this country.”

Esposito joins other film/TV actors who have crossed over into the video game space as of late, including Keanu Reeves (“Cyberpunk 2077”) and Norman Reedus (“Death Stranding”), although this isn’t his first foray into the genre; in 2013, he portrayed the Dentist in “Payday 2.” For “Far Cry 6,” Esposito says he welcomed the challenge of working in a virtual world via motion-capture suits. He recalls shooting the trailer before shooting the bulk of the game’s narrative (to allow for developers to build out his and Gonzalez’s characters), which put him in the unique position of piecing together the world of Yara out of chronological order.

“The challenges are to create that world virtually within your own imagination,” he explains. “That, to me, was the greatest challenge.”

Esposito will reprise his role as another villain, Moff Gideon, in Season 2 of Disney Plus series “The Mandalorian,” during the production of which he broke multiple lightsaber props. The show’s sophomore run is slated to come out in October. Esposito says he has not yet seen cuts of new episodes but has been in touch with series creator Jon Favreau. “I’ve had a chance to have some conversations with him. So, I haven’t seen any of [Season] 2 yet, but it’s gonna be power-packed, and I think in Jon’s mind, he’s probably already writing [Season] 3.”

Moving from one fan-centric universe to the next is something Esposito is doing a lot of these days. He admits video games are still a relatively new world for him but one he would like to stay in, specifically in the “Far Cry” universe.

“Yes, the answer is yes, as long as I could do the next two or three ‘Far Cry’ games, to get real specific,” he says, laughing.

Of course, that doesn’t necessarily mean Castillo lives through the end of “Far Cry 6.”

“But whether he does or not, I don’t care,” Esposito laughs of his character’s fate. “I’m a chameleon. I’ll do whatever I have to do to convince you that I’m some other character in a ‘Far Cry’ game, if need be, and maybe to be the good guy next time ‘cause I’m really kind of sweet and lovable.”

In recent weeks, Ubisoft, the company that publishes the “Far Cry” series, has faced allegations of abuse and harassment, most recently resulting in the exit of multiple top executives, including vice-president Maxime Béland and chief creative officer Serge Hascoët. The company issued a statement ahead of Ubisoft Forward via Twitter, saying that the pre-recorded event “comes during a time of big internal change” and that it would not address those issues during the show. “We still have significant work to do and are committed to this process. We will provide more updates soon,” it read.

Watch the full interview with Giancarlo Esposito above.