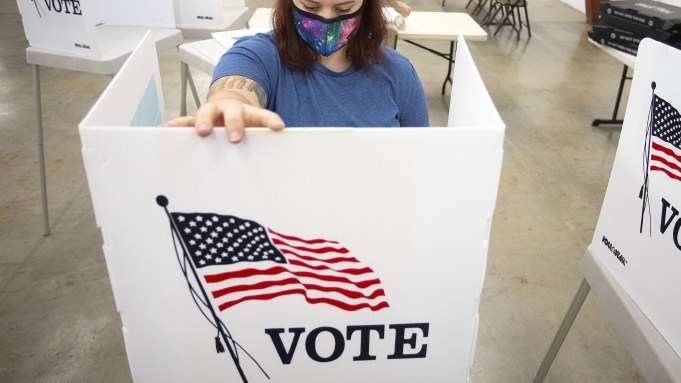 Will Donald Trump try to claim he won before enough votes are counted to determine a winner in the U.S. presidential election? That’s been the incumbent president’s plan, per an Axios report over the weekend.

Facebook and Twitter claim they’re ready to respond quickly to add warning labels to posts on their services by any candidates or campaigns prematurely declaring that they have won.

Both social networks — after having been targeted by Russian disinformation campaigns in 2016 — say they have made significant strides leading up to 2020 Election Day in the U.S., with teams in place to respond to misinformation and election-interference attempts before, during and after Nov. 3.

Twitter on Monday (Nov. 2), which had previously announced a ban on premature claims of victory, released previews what the labels will look like on tweets that violate the policy (see below).

The company said it will consider an election result official when “either an announcement is made from state election officials, or a public projection is made from at least two authoritative, national news outlets.” Those outlets are ABC News, the AP, CBS News, CNN, Decision Desk HQ, Fox News Channel and NBC News. According to Twitter, those news organizations’ accounts will be exempted from election results labels and so will tweets that directly cite a call or projection from those news orgs.

Among other measures Twitter is taking related to the election: As of Oct. 20, the service has prompted users to use the “quote tweet” function instead of simply retweeting a post (which it believes will slow down the spread of false information); it will show users a prompt pointing them to “credible information” if they attempt to retweet posts that violate Twitter’s policies against “misleading information about civic integrity, COVID-19, and synthetic and manipulated media”; and the company has banned tweets that it interprets as trying to “incite interference with the election process,” such as through violent action.

Facebook also plans to append warning messages if anyone tries to say they’ve won before results are official. Facebook says it is teaming with the National Election Pool consortium and Reuters to provide “authoritative information” about election results, which the social platform will display in Facebook’s Voting Information Center. The company also says it will proactively notify users as results become available.

“Importantly, if any candidate or campaign tries to declare victory before the results are in, we’ll add a label to their post educating that official results are not yet in and directing people to the official results,” Facebook CEO Mark Zuckerberg wrote in a September blog post.

Facebook, whose family of apps had 3.2 billion monthly users as of September, also said it will prohibit all political ads after polls close Nov. 3. (It hasn’t said when it will allow those to resume.) Twitter banned political advertising from its platform a year ago.

Other election-related safety steps Facebook is taking: Last week, it shut off political and social group recommendations while Instagram disabled the “Recent” tab on hashtag pages to stop the spread of misinformation around Election Day.

Facebook also has said it will remove posts by anyone attempting to engage in poll watching “when those calls use militarized language or suggest that the goal is to intimidate, exert control, or display power over election officials or voters.”

As Zuckerberg noted in his recent blog post, in addition to foreign actors attempting to interfere in American politics, “we’re increasingly seeing attempts to undermine the legitimacy of our elections from within our own borders.”