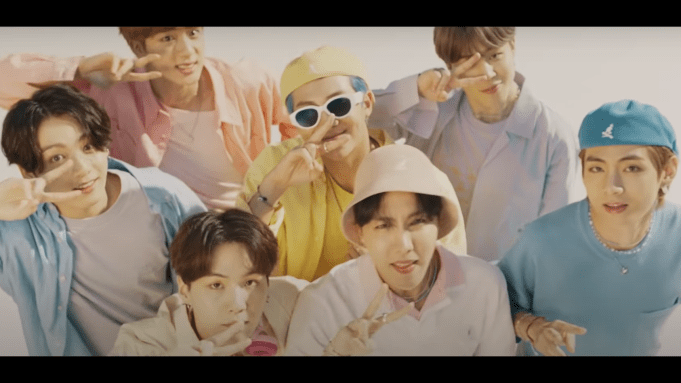 UPDATED (Aug. 23, 4 pm ET): BTS Army has done it: K-pop idols BTS’s new video for “Dynamite” set a new YouTube record for views in the first 24 hours of release — and it officially topped 100 million views in that time period, Variety has confirmed.

According to YouTube’s public views counter, the BTS “Dynamite” video had 98.3 million views in the 24 hours after it went live on Friday. However, YouTube on Sunday said the official view count for the video’s first 24 hours was actually 101.1 million, a goal BTS’s extraordinarily passionate fanbase (aka BTS Army) had been hoping to achieve.

“We can confirm that BTS (방탄소년단) ‘Dynamite’ Official MV set a new all-time 24hr record, surpassing 100 million views with 101.1 million views in the first 24 hours,” a YouTube spokesman said in an email.

The upbeat, dance-y and vivid “Dynamite” music video was released on YouTube Friday, Aug. 21, at 12 a.m. ET/1 p.m. KST. By 8:35 p.m. ET (9:35 a.m. KST on Saturday), “Dynamite” had registered more than 86.4 million views on YouTube. At that point, it had already topped the prior record holder: Blackpink’s “How You Like That,” which two months ago racked up an official tally of 86.3 million views in the first 24 hours.

“Dynamite,” the group’s first song entirely in English, hit the No. 1 trending spot on YouTube globally within 12 hours of its debut. The video also notched a record for most-viewed YouTube Premiere with more than 3 million live concurrent viewers, YouTube confirmed to Variety.

YouTube’s 24-hour views metric has become a yardstick in the music business for bragging rights and promotion. In response to some promoters gaming the system, YouTube changed its methodology for YouTube Music Charts in September 2019 to no longer count paid advertising views in 24-hour counts, which it said was to best reflect authentic fan engagement.

Note that BTS has previously held the 24-hour views record several times, most recently with the April 2019 release of “Boy With Luv” featuring Halsey (74.6 million views in the initial one-day period). The “Dynamite” vid was directed by Yong Seok Choi of production firm Lumpens, who also helmed “Boy With Luv.”