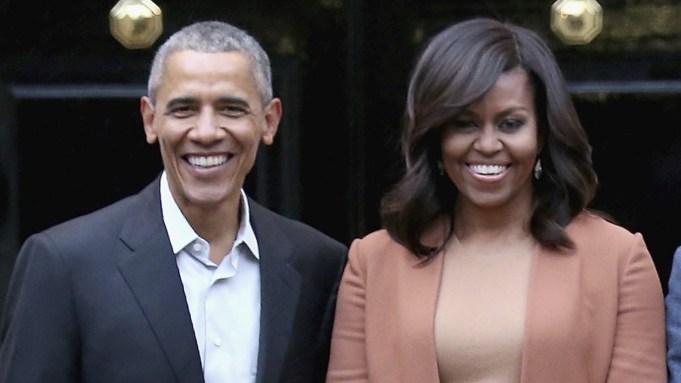 No shocker here: In the premiere episode of Michelle Obama’s Spotify podcast, she sits down for a one-on-one conversation with her husband, former President Barack Obama.

The first episode of “The Michelle Obama Podcast” with the former First Couple launches July 29 exclusively on Spotify worldwide. Barack and Michelle Obama talk about their life together since leaving the White House in 2016 — and during quarantine — in a discussion focusing on Americans’ relationship with community in a time of social turmoil.

“Given everything that’s going on right now, from the killings of George Floyd, Breonna Taylor, Ahmaud Arbery and the ongoing protests and conversations that are testing our patience — and our consciences… not to mention all the challenges we’re experiencing due to the pandemic, I think that these days, a lot of people are questioning just where and how they can fit into a community,” Michelle says in the episode’s introduction.

She explains that she invited Barack as her first guest “because he’s navigated these questions throughout the course of his life. In many ways, you can see his entire career as a constant conversation and evolution with his relationship to a larger and larger community.”

Of course, the unspoken reason he’s her lead-off guest is that the 44th U.S. president is likely to be her biggest draw as she angles to cultivate an audience for “The Michelle Obama Podcast.” Spotify, too, is banking on the First Couple’s interplay to grab new listeners for its expanding podcast business.

In talking about their different backgrounds growing up, Barack teases Michelle that her family was like “the Black ‘Leave It to Beavers’… only thing missing was the dog.”

The couple also banter about being cooped up during COVID-19. “Like most Americans, we’ve been spending a lot of time together in quarantine,” Michelle says, opening the door for Barack to crack, “You don’t seem too happy about that” before he admits, “I’ve been loving it.” Michelle responds, “Yeah, I’ve been having a great time. But we’ve had some interesting conversations… because these are some crazy times.”

Subsequent episodes of “The Michelle Obama Podcast” will feature Washington Post columnist Michele Norris on “self in the time of COVID”; Dr. Sharon Malone, wife of former U.S. Attorney General Eric Holder, discussing women’s health; her older brother, Craig Robinson, talking about sibling relationships, and a subsequent episode with Craig and her mom, Marian Robinson; Conan O’Brien on marriage; and friends Malone, Kelly Dibble and Denielle Pemberton-Heard in a conversation about friendships.

“The Michelle Obama Podcast” is the first project from Higher Ground, the Obamas’ media production firm, for Spotify under their exclusive multiyear pact.

Barack and Michelle Obama recording the first episode of her podcast. Credit: Courtesy of Spotify

“After I left the White House, I did a lot of reflecting back on my life — not just on the big moments at the White House, but on the small ones,” Michelle says in the intro to episode 1. “Going back through these memories reminded me that the main truth of my story isn’t anything I did as First Lady, but the experiences that make me who I am… And that’s what I hope this podcast can be: a place for us to explore big topics together.”

Watch the teaser trailer for “The Michelle Obama Podcast”: