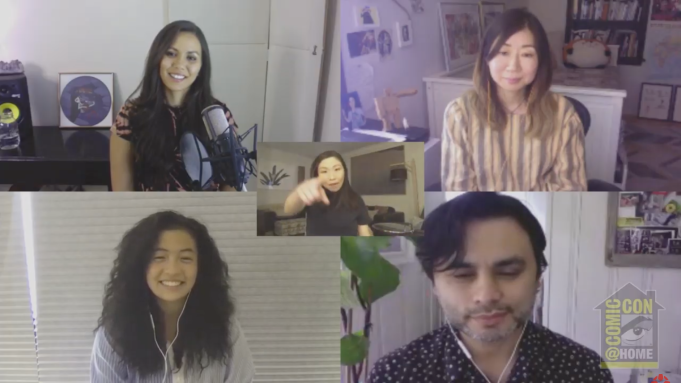 “Adventure Time: Distant Lands” executive producer Adam Muto and stars Glory Curda, Michaela Dietz, Olivia Olson and Niki Yang joined for a virtual panel as part of San Diego Comic-Con@Home on Friday, during which they teased the second special, “Obsidian.” They also revealed some details about the upcoming episode, including the new character Glassboy, Marceline and Bubblegum’s relationship, Marceline’s new music and more.

Here are the takeaways on “Obsidian,” the upcoming special of “Adventure Time: Distant Lands,” that is due to release on HBO Max this year.

In Cartoon Network’s “Adventure Time” series timeline, Marceline’s life predates Finn and Jake’s. Olson, who voices Marceline, shared that “Obsidian” follows Marceline “getting over some of the barriers she’s put up in place for herself.”

“She’s gone through lifetimes of ups and downs with different people and seen them come and go,” she said. “So I think it has put her walls up really high, as far as how much she lets people into her life. She kind of decodes some of these themes.”

She also teased that Marceline will “put her energy into somebody else” after she figures out “all the stuff she is dealing with.”

Finn and Jake Aren’t Coming Back, But Meet Glassboy

Finn and Jake won’t make appearances in “Obsidian,” but in their place are new heroes from the Glass Kingdom. The panel introduced new character Glassboy, who has “elements of Finn, if they were more extreme.”

Glassboy is voiced by Dietz, who is best known for voicing Amethyst in Cartoon Network’s “Steven Universe.” She shared that during recording sessions, she was asked to increase the level of “fanboy” energy in her voice.

Bubblegum and Marceline’s Relationship Will Escalate

In the final scenes of the “Adventure Time” series finale, Bubblegum and Marceline expressed their love for each other with a kiss. But this long awaited moment was only a one-second payoff.

Olson assured fans that Obsidian will be “really satisfying.” “It’s really cool to be able to see some of the things in the past that happened between them and how it will affect their future moving forward,” she said. “I was really excited when I read this script. I think the way they executed this storyline with ‘Obsidian’ will be really satisfying for the fans to take off a lot of questions that they’ve had.”

The panel not only reminded fans of the upcoming BMO mixtape – featuring tunes from both the original series and the specials – but also teased that fans will hear new music from Marceline.

Olson said that fans will see how Marceline’s songwriting has progressed from the “Adventure Time” series. “[We see] just how the subject matter can kind of change from the tone and her emotions and where she’s at mentally will be on full-display on the songs she does in the special,” she said.

The livestream did not share a new trailer for “Obsidian” but showcased an original tune featured in the special, “Monsters.” Watch the panel above.