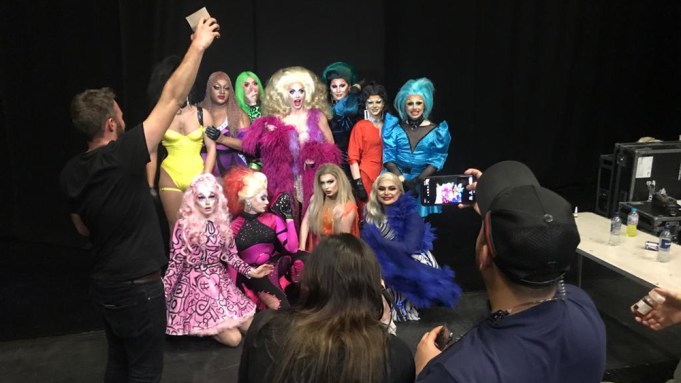 Courtesy of World of Wonder

“RuPaul’s Drag Race” producer World of Wonder has greenlit two docu-series: “God Shave the Queens!” and an “Untitled Trinity Taylor Pageant Project.” The announcement will be made Sunday at the first-ever DragCon U.K. convention, which is taking place at Olympia, London.

“God Shave the Queens!” features the first-ever cast of “RuPaul’s Drag Race UK” and the legendary Alyssa Edwards as they roll non-stop through a six-city U.K. tour. The series includes never-seen-before performances, and backstage life on the road.

“The Untitled Trinity Pageant Project” follows Trinity Taylor, “RuPaul’s Drag Race All Stars” season 4 winner, and the new owner of the Florida Entertainer of the Year Preliminary Pageant (a nationwide competition that has featured drag stars like Alyssa Edwards, Nina West and Shangela).

Since 1991, Entertainer of the Year was one of the main outlets for queens to gain a national platform, until television and social media opened the floodgates of exposure.

“Trinity is putting her reputation on the line,” the producers said in a statement, “as she works to inspire the next generation of drag pageant competitors.” The series watches on as Trinity and select competing queens prep for the Florida regional pageant, and then follows the winner to Nationals in Louisville, Kentucky.

The shows stream on SVOD platform WOW Presents Plus.

“International audiences have shown a huge appetite for WOW Presents Plus content and we are thrilled to expand our growing roster of premium shows,” said World of Wonder co-founders Randy Barbato and Fenton Bailey in a statement.

“World of Wonder has always been committed to its talent and we are proud to be able to continue to invest in the fierce queens who have come out of the ‘Drag Race’ franchise through our digital platform.”