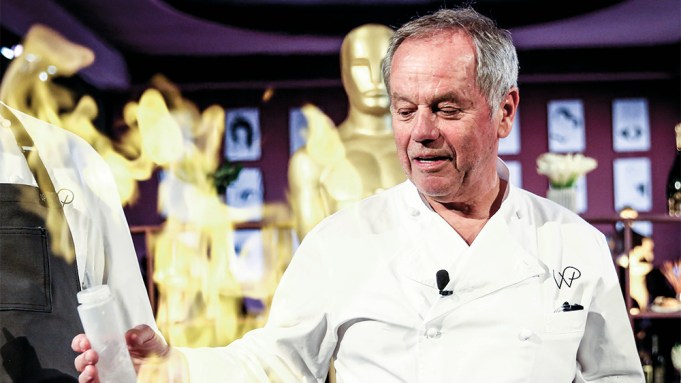 The Academy Awards are the biggest night of the year in Hollywood, but it’s after the last statuette has been handed over and the live broadcast has finally come to an end, that the real fun begins for those in attendance. The starving guests are the responsibility of Wolfgang Puck, the official caterer of the Governors Ball now for more than a quarter of a century — this year marks the internationally famous chef’s 26th time tackling the event.

There is always a theme to the Oscars, and this year’s theme is harmony and relaxation.

Back in the early 1990s, Puck’s restaurant Spago was the hottest restaurant in Los Angeles, attracting celebs practically every night of the week and filling its reservation book months in advance.

“In those times, celebrities always did their afterparty at Spago, up in the hills in West Hollywood,” Puck remembers. “At that time, nobody really went to the Governors Ball.”

Fortunately, some of the producers of the Academy Awards were customers of Puck’s themselves, and they decided to ask the man whose food they loved to eat if he would like to feed them in a more official capacity.

“They said to me, ‘Wolfgang, why don’t you cater our event, our ball?’ And I said, ‘OK, that might be something interesting.’”

Under Puck’s command, the Governors Ball was ushered into a kind of culinary golden age. He whipped up many of his staple dishes — pizzas, including the ones he’s renowned for at Spago; slider burgers; smoked salmon; and, of course, chicken pot pies. Barbra Streisand has famously said she adores Puck’s pot pies. They’re so beloved, that Puck claims they’re eaten by everyone. “Even the vegetarians, they’re eating the chicken pot pies, too!”

In the early days, the service was “a big sit-down dinner,” at which each of the celebrities “had their dinner at a table, and the tables were all reserved.” But after Dawn Hudson became the president of the Academy, it was decided that the dinner should become less formal, more like a cocktail party. The dinner is flexible and casual with the freedom to mingle.

“If you have [director Alejandro] Iñárritu there, and all of a sudden you have Spielberg come in, we can sit them close together so they can see each other, they can talk.”

As the service got more casual, so did the food. “We changed the menu,” he says. “Instead of a main course, we serve small plates. Thirty or 35 small dishes.”
The result was an incredible variety of food. “If you want to have a baked potato with caviar, you can have two or three of them if you like. We have crispy quail with waffles. You can take 10 different things. We even have vegan dishes. There’s really something for everybody.”

With upward of 6,000 diners being fed throughout the course of the party, you might think the menu would lean conservative and simple, to make things easier on the kitchen. But that’s not Puck’s style. The Governors Ball menu is notoriously packed with dazzling oddities: Pimm’s and kumquat chocolate bonbons, caramel passion fruit lollipops shaped to look like Oscar statuettes, caviar parfaits that have been dusted in real 24-karat gold.

Best-known and most beloved of all is Puck’s signature Oscars dish: his replica chocolate statuettes, dipped and coated in gold.

“That comes from a party we had at Spago back in the ’80s,” Puck says. “Now we always do that. With chocolate you have the ability to create a mold and make anything. For Easter, you can make the Easter Bunny in chocolate. For Christmas, you can make Santa Clauses out of chocolate. So I said,’OK, for the Oscars, we are going to make the Oscar, too!’”

As for the gold covering, Puck wants everyone to feel like a winner. “What I really wanted was to give everyone an Oscar,” he says. “People really love it. It’s interesting how this little party favor can come to mean so much to people.”