Hollywood Reacts to Harvey Weinstein Verdict: ‘I Hope the Handcuffs Are Tight’ 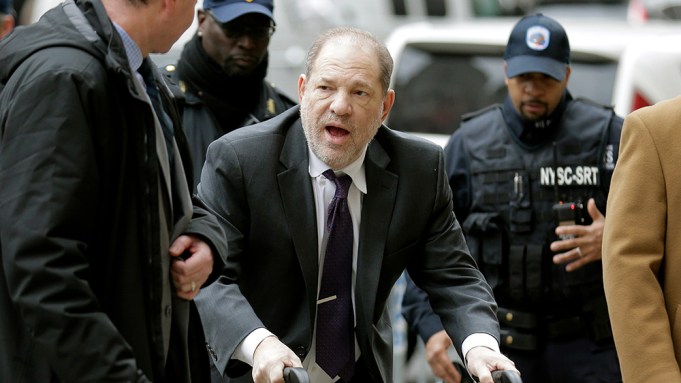 Harvey Weinstein, once regarded as one of the most influential forces in the film industry, was found guilty of committing a “criminal sexual act” and third-degree rape on Monday morning. He was acquitted on two counts of predatory sexual assault.

The verdict comes two years after more than a dozen women accused Weinstein of sexual harassment, assault or rape in explosive exposés published by the New York Times and the New Yorker. Since then, more than 100 women have come forward with similar allegations. Hollywood reflected on the verdict on Monday, with many, including actress Ashley Judd — one of Weinstein’s accusers — commending the six women who testified in the case for their courage.

For the women who testified in this case, and walked through traumatic hell, you did a public service to girls and women everywhere, thank you.#ConvictWeinstein #Guilty

Anthony Rapp, who accused Kevin Spacey of making an unwanted sexual advance toward him when he was 14, also applauded the witnesses.

I applaud the women who bravely stepped forward to help forever alter the conversation around what they — and all of us — have to put up with. Gratified to see some justice being served here. #MeToo https://t.co/wR4f66uecj

Here are more reactions to the verdict:

“Today’s verdict is a significant and long-overdue step towards justice for women who have, for years, silently shouldered workplace sexual harassment and assault without recourse,” Schaffer said in a statement. “WIF extends its most heartfelt gratitude and support to the Silence Breakers who have heroically endured so much throughout this trial. We trust that this conviction will set a precedent so that perpetrators of sexual assault and harassment — no matter how powerful — will now be unable to escape the criminal consequences of their predatory behavior. For nearly five decades WIF has worked to combat inequity in entertainment and we will continue to innovate new ways to ensure safety, and bring about parity in all areas of the screen industries. We encourage anyone who has experienced sexual harassment or misconduct while working in entertainment, and needs support, to call the WIF Help Line at 855.WIF.LINE.”

The Writers Guild of America East also issued a statement on Monday: “The New York jury’s guilty verdict against Harvey Weinstein should remind all of us about the critical issues that have reshaped the consciousness, and perhaps the conscience, of the entertainment industry in the two-plus years since brave journalists – and even braver survivors – made his behavior known,” it read, in part. “The revelations about Weinstein’s horrific conduct tapped a deep vein of rage among women in the industry which reverberated across the rest of society. All of us were forced to confront the awful reality that power imbalances are routinely sexualized. Careers and bodies are not safe.”

“We at the Writers Guild of America, East recognize that the only effective way to ensure that people can work in an environment free from sexually inappropriate conduct is to undertake the long, difficult task of rebalancing power. When a relatively small number of people, mostly men, wield such a high degree of authority over the working lives of other people, the consequences have proven to be dangerous, destructive, and profoundly unjust.”

Today’s outcome in Harvey Weinstein’s New York trial is the result of the decisions of multiple women to come forward to journalists and to prosecutors at great personal cost and risk. Please keep those women in your thoughts today.

I am heartened for his victims and for all those who said #metoo and #TimesUp that some justice has been done. https://t.co/5PYPfhRPjq

The jury convicted Weinstein of 1 count of rape & 1 count of committing a criminal sexual act. He was acquitted on the charges of predatory sexual assault, which each carried a potential life sentence.https://t.co/6J16rDHUbN

0.7% of sex criminals are convicted. weinstein has been convicted https://t.co/f1Ppy3ploe

If there's a man who doesn't deserve bail, it's him.

That cheering you hear is the sound of female journalists finally being able to drop the "alleged" before "rapist Harvey Weinstein" in their columns.

Grateful to all the courageous victims -and the villages that supported them- for stepping up and sharing your painful experiences so #Weinstein would be held accountable.

You have inspired and made a difference in the lives of many.

Weinstein's conviction will almost certainly be appealed. But he never would have been charged without 100+ women speaking out and substantial investigative and analytical journalism.