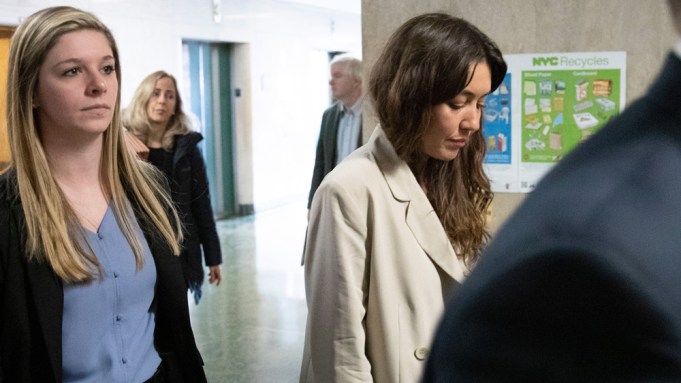 Harvey Weinstein’s defense attorney went on the attack on Monday afternoon, suggesting that a sex assault accuser had fabricated her claims because it was no longer “in vogue” to be friends with the producer.

Miriam Haley testified earlier in the day Monday that Weinstein forcibly performed oral sex on her at his apartment in 2006. She had first told of that assault in October 2017, when she spoke at a press conference with Gloria Allred. But on the stand on Monday, she added a significant new detail: She had another sexual encounter with Weinstein two weeks later at the Tribeca Grand Hotel.

Haley, who worked as a production assistant on “Project Runway,” said that Weinstein had sex with her while she laid there passively. She said he called her a “whore” and a “bitch” in an effort to turn her on. Asked by the prosecutor if she had wanted to have sex with Weinstein that day, she said “no.” But she also said “no” when asked by the defense if Weinstein had “forced” her to have sex.

Defense attorney Damon Cheronis asked why Haley had not mentioned the encounter — or the vivid details about being called a “bitch” and a “whore” — during the press conference, or in an appearance on “The Today Show.” She said she had not remembered the epithets at first, but recalled them when she “focused in” on the details with the D.A.’s office.

“You did not tell the world in October 2017 the rest of the story, did you?” Cheronis asked.

Haley answered that if she had given the whole story, her statement would have been two hours long.

“The truth is,” Cheronis said, “the reason that you did not tell the world that is because you know they would look at you skeptically.”

“That is not true,” Haley said.

“The truth is that you had a consensual relationship with Mr. Weinstein,” Cheronis said. Haley denied it.

“You had a friendship with Mr. Weinstein,” Cheronis said. “It wasn’t ‘in vogue’ to be friends with Harvey Weinstein anymore in October 2017, was it? You couldn’t send him scripts anymore, could you?”

Haley said she doesn’t send him scripts because she is no longer in the entertainment industry.

Cheronis also asked if she was planning to sue Weinstein. “I have no plans,” she said.

Assistant District Attorney Meghan Hast asked Haley on re-direct whether she considered the second encounter to have been a sexual assault.

“I didn’t know that was an assault because I didn’t physically resist, so I didn’t recognize that as an assault,” Haley said, and then she began to cry.

Haley was also asked if — as the defense has insinuated — she was “using” Weinstein to get things she wanted.

On re-cross, Cheronis asked if it was her testimony that Weinstein sexually assaulted her on July 10, and then on July 26, “there was some kind of sex that was not forced, but that you weren’t interested in?”

Raising his voice, Cheronis said: “Because there was never any sexual assault!”

Allred said outside court that the defense strategy was “all about putting the blame on women.”

“They grilled her. They tried to shame her, blame her, discredit her, demean her, smear her,” Allred said. “I hope that everyone sees her for what she really is — one of the true heroes of this case.”

Mackenzie Nichols contributed to this story.