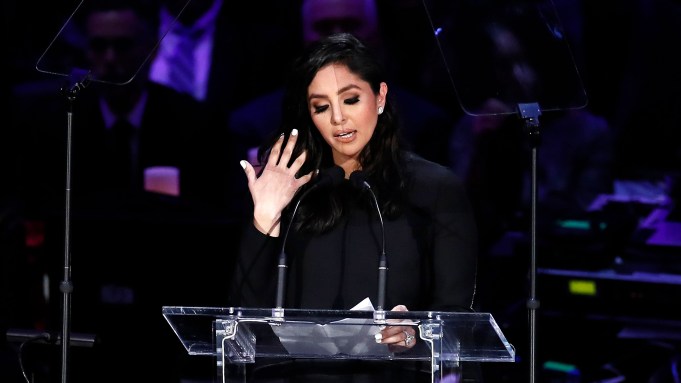 Vanessa Bryant held back tears as she paid emotional tribute to her late husband and NBA legend Kobe Bryant and daughter Gianna at a memorial service held at the Staples Center on Monday.

Vanessa began her touching speech by remembering her 13-year-old daughter, who she says was “a sweet soul,” and reflected on their friendship.

“She was one of my very best friends,” Vanessa said. “She loved to bake. She loved putting a smile on everyone’s face.”

“She was a happy, kind, silly, thoughtful and loving sister and she had so much life and had so much more to offer the world. I cannot imagine life without her.”

Vanessa then went on to remember her husband Kobe, her “soulmate.”

“I was his first girlfriend, his first love, his wife, his best friend, his confidant and his protector,” she began. “He was the most amazing husband.”

She went on to reminisce about the moments of him being a doting father to his family, picking up and dropping off his daughters from school and planning special gifts and dates for Valentine’s Day and their anniversaries.

“They were funny, happy, silly and they loved life,” she continued. ” They were so full of joy and adventure. God knew they couldn’t be on this earth without each other.”

“Babe, you take care of our Gigi.”

Just before the emotional memorial, news broke that Vanessa’s attorneys had filed a wrongful death lawsuit against Island Express Helicopters, the company that operated the helicopter Kobe and Gianna were on that resulted in their deaths last month. The suit alleges that the pilot, Ara Zobayan, was negligent and careless, which resulted in the deaths of all nine people on board.