Telecom CEO Battles Coronavirus on the Job and at Home

In this webcast, BT Group’s Philip Jansen recounts lessons from his own illness and his company’s steps to support its workers during the COVID-19 crisis 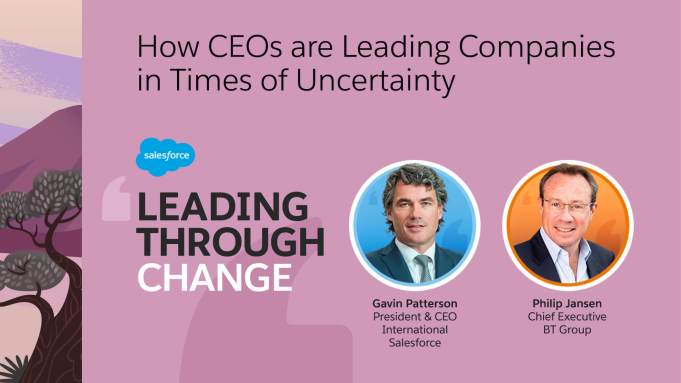 As Chief Executive of BT Group PLC, the U.K.’s largest provider of fixed-line, broadband and mobile services, Philip Jansen is a major player in keeping his nation’s communications network humming. Never was that charge more critical than during the current pandemic, when most ordinary interactions are virtual ones and any connectivity losses can be ruinous.

BT’s executive committee recently issued a statement of intent affirming: “We are standing by our customers, our country and our colleagues.”

Those three C’s are one tall order, not least when the Chief Executive is battling a fourth C, coronavirus itself, as Jansen did in mid-March.

Jansen’s COVID-19 experience is but one topic in a candid, far-ranging conversation with his BT predecessor Gavin Patterson, (now president and CEO of Salesforce International) as part of Salesforce’s “Leading Through Change” web series. The episode, enlivened by a guest appearance from rock star Chrissie Hynde, explains how the telecom firm is carrying out its mission while planning for a future shrouded in uncertainty.

Patterson says “Businesses have taken a lot of criticism in the past few years. The trust and the relationship between business and its communities has been challenged. But I think this is a very timely opportunity to be able to demonstrate that business is key to…assuring that everyone across the world is able to have full and healthy lives.”

As Jansen tells it, early rumblings from China and Italy suggested efforts above and beyond would be required in the U.K., where BT has some 30 million clients. The implications of a ballooning pandemic soon became clear. “We were facing major challenges in terms of capacity and access, and increased demands on the network…People wanted better connectivity, and that meant visits to the network and pockets that were under great pressure.” Hospitals required uninterrupted service; corporate partners requested retraining for remote work. Everyone craved speed.

Jansen lauds the company’s 30,000 field engineers and 25,000 contact-center workers fielding calls and questions. Yet as time went on, 10-20% of the workforce came down with symptoms or diagnoses requiring quarantine, which placed even greater demands on those still healthy.

He says one key decision was to back up calls for extraordinary labors with assured rewards. “We said, ‘Look, we are going to guarantee that you’ll have a job at BT and not lose [it] as a result of the coronavirus impact.’ We said we would pay people under all of the circumstances. If they’re ill or isolating or need to look after someone…we would cover them for that.”

BT also increased pay for its front-line workers by 1.5 percent (while holding the line on pay for the management team). The company also confirmed it would honor the pledge to hand staff members £500 ($618) in shares, totaling an estimated $61.5 million.

Jansen has no doubt as to the effectiveness of these incentives. “The response is phenomenal,” he states. “They have maintained the performance.”

As the company ramped up its energies, his own energy suffered a blow. He went away with a group of friends shortly before the danger of the outbreak was clear. (“People were just at the stage of thinking about not doing handshakes,” he notes wryly.) Half the attendees contracted the virus, some developing severe illness. Jansen himself had only mild, intermittent symptoms but his chief medical officer urged a test. It came back positive on March 13. He became the first FTSE 100 chief executive to announce a positive test for the virus.

“It was a bit strange,” he reports with typical understatement. “I was very fortunate.” He went into recommended isolation, which enhanced his empathy for his people. “I articulated this to all of my colleagues: no matter how challenging it is personally, the mental well-being is so important,” Jansen recalls. “I make sure I have taken my own advice on that.” The CEO has adopted a regimen of outdoor walks.

The overall situation is calming a bit, reports Jansen, permitting everyone to take a breath and consider where BT, and the world at large, should go from here. “You are not seeing companies’ outlook statements,” he notes, since no one is sure what the rest of 2020 holds. His group is alternately planning for a 3-month lockdown and a 6-month one (not likely, but “you can’t afford to be complacent”) and considering three possible recovery speeds: quick, medium and slow.

Going further, Salesforce’s Patterson believes “we need to look forward,” and discover new ways of governing and educating ourselves and new ways of doing business. “Nobody is believing we are reverting to the way that we were…There will be a time that we are coming out of this, and it’s important that we’re ready to help our customers as they transform their businesses on the back of this change.”

“Ultimately, we are going to be judged by the way we look after all the stakeholders, as business leaders.”

The complete conversation between Philip Jansen and Gavin Patterson, including musical selections from Chrissie Hynde and James Walbourne, can be seen above. To see more of Leading Through Change, go to salesforce.com/blog.