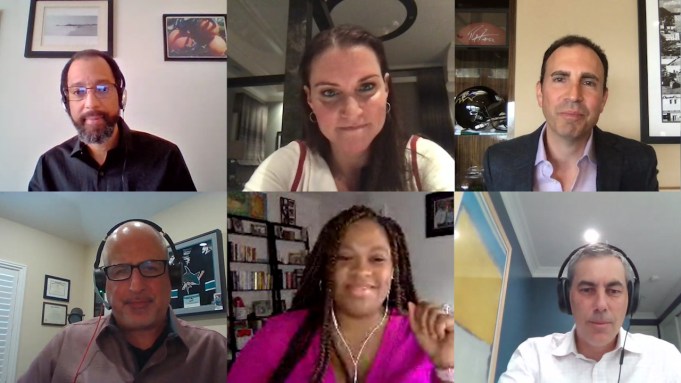 Professional sports have been put in a particularly tricky position amid the coronavirus pandemic. With both player and fan safety remaining important concerns, organizations are taking different approaches to safely return to operations.

Several industry leaders joined the latest episode of the Variety Streaming Room’s series “Rebooting the Entertainment Industry” to take part in a conversation moderated by Jay Tucker. The group discussed how their companies have weathered the pandemic so far and what adjustments may turn out to be permanent moving forward.

Unlike most other organizations, the WWE’s unique position at the intersection of entertainment and athletics has allowed it to find ways to continuously produce seven hours of content a week during the pandemic. Chief brand officer Stephanie McMahon spoke to how the health of staff members is being closely monitored and that the organization is prepared to shutter its production if need be.

“When our talent, crew, anybody arrives at the facility, they have their temperature taken,” McMahon explained. “If they have a temperature over 100.4 [Fahrenheit], they are sent home. We do a medical screening to make sure they’re not symptomatic and they also have to fill out a sheet in terms of where they’ve been and who they’ve interacted with. Thus far, it’s been successful. We had one employee test positive and that was in the very beginning. That employee had been in direct contact with medical workers after a show and was not allowed back in until she was cleared, and luckily she is all fine. Just last night, we did have a developmental performer test positive. So we are now shutting down production. We’re going to have absolutely everyone tested, anybody and everybody who was around. And we will not resume our production until we know that the health and safety of all of our people is ensured.”

Some organizations have not been as fortunate. The NBA was about a month out from playoff season when Utah Jazz center Rudy Gobert tested positive for coronavirus, prompting the league’s decision to suspend the ongoing season. Lisa Joseph Metelus, co-head of basketball marketing and servicing at Creative Artists Agency, commented on the ongoing discourse between players on the prospect of returning to play.

The NFL was more fortunate than the NBA, as the lockdowns went into effect nationwide about a month after this year’s Super Bowl. Without any schedule to suspend, the organization has been able to take stock of the next season and make plans for how to execute it. Los Angeles Rams COO Kevin Demoff offered insight on the unique challenges that football poses to players’ health, as well as the benefits of the team’s new stadium.

“It is a contact sport. So, it is impossible to socially distance on the field [and] figure out how you do that,” Demoff said. “The first step is how do we make it safe for our players the moment they walk back into our facility at the end of July. Hopefully they feel that the environment is completely safe for them. The next step is ultimately how do we go into stadiums and make those safe just for players. Finally, the last step will be fans. Who knows when that will come? For us, having built a brand new stadium in Los Angeles that was set to debut this summer, there’s value in that in the sense that we’ve never been in it before. So we have the ability to adapt quickly to the changes that we can do right now. … It gives you the chance to go in and make some of these social distancing things to help with the concessions. But to clean a stadium that’s 3.2 million square feet also has its challenges.”

With most professional play has been suspended nationwide, all professional sports organizations are looking for ways to keep fans engaged without a steady stream of news. Fox Sports executive VP and head of digital David Katz remarked that the unprecedented circumstances have likely changed how the company will engage with its fans even after the pandemic.

“The fan appetite for content, for information, for connection more than anything else, has never been greater,” Katz said. “The challenge was how do you serve those fans when you can’t give them the daily recipe of here’s what happened and here’s the analysis… These challenges represent a great opportunity and really transformed what digital businesses will be able to do going forward…A fun fact here: in May, our baseball social handles had their third highest month in history. That’s with no baseball to talk about and second only to the last two Octobers which have the World Series.”

“We’re in uncharted territories, there’s no wrong or right answers,” said Mark McCaffrey, who serves as partner and U.S. technology, media and telecommunications leader at PwC. “I always come back to the technology. This happens 10 years ago, I don’t know what we’d do. The science, the innovation, the ability to address these problems, while they are really hard problems, is there. We have all the elements to get through this…This happens 10 or 15 years ago, I’m not sure we’d all be sitting here doing the same thing right now.”

“I’m not sure we’d all be able to do this video cast right now!” McMahon said.