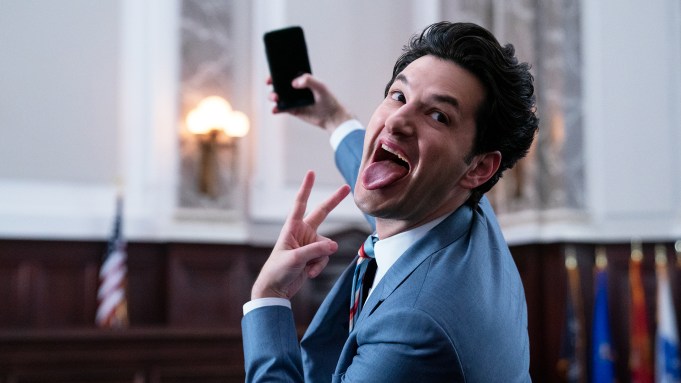 The series is about the fictional launch of a new branch of the military. In reality, the current administration has announced an honest-to-goodness Space Force, and the leadup to the premiere of the show has paralleled the Pentagon’s real-life rollout.

But while the real Space Force debut is in earnest, the series is a workplace comedy — from no less than creators Steve Carell and Greg Daniels, who had collaborated on “The Office.”  The series features comic heavyweights Carell and John Malkovich along with up-and-comers, including Ben Schwartz.

In the latest episode of Netflix’s “Scene Stealers,” Schwartz joins casting directors Allison Jones and Ben Harris to reveal the recipe for assembling an ensemble to ignite laughs and help the show achieve lift-off.

Jones and Harris had worked with Daniels and Carell on “The Office” and knew where they wanted to begin: “Start bringing in funny people,” says Jones, who earned an Emmy for her work on “Freaks and Geeks.”

One of those was Schwartz, who had been a scene stealer on “Parks and Recreation” as the absurd Jean-Ralphio Saperstein.

Schwartz says: “They find the funniest people and they bring them in and keep bringing them in. She [Jones] had to bring me in a lot of times ‘til anybody cared. She pushes for them — pushes for people like me who they think are funny … and then finds a way to put them in a show where they fit the best.”

Jones says Schwartz’s role was the toughest to cast.

“There was a little bit of Jean-Ralphio similarity, which we had discussed when he came in,” she says, “but Howard Klein, the executive producer, would have walked out into traffic if we didn’t cast Ben Schwartz.”

Schwartz was careful to craft a character different from his “Parks and Recreation” role.

“For me it was this person that kind of … had no other option,” he says. “This was the only job he could get, and if he doesn’t succeed in this, he’s kinda out. I think it’s the idea that this person has a lot of followers online, but in real life probably is totally alone.”

Jones and Harris nurtured the young actor, who would borrow space at their offices to write. The relationship began after Jones, seeing a joke Schwartz had written, contacted his manager in New York. They linked up when Schwartz first visited Los Angeles to explore writing for “Robot Chicken.” The young actor is grateful for the leg up from Jones and Harris, as well as the experience of working with veteran talent.

“It’s crazy to act with Steve [Carell], ’cause I’ve watched every episode of ‘The Office,’” Schwartz says. “He turned that character into such a funny and heartwarming character.”

He also relishes the chance to work with journeyman actors such as Don Lake, a “perfect example” of the skill of Jones and Harris in surfacing top talent, he says.

“He’s just the funniest person, and he’s so good in the show,” Schwartz says.

“We pride ourselves on bringing in new, fresh faces, but I think it’s also there are plenty of journeyman actors that have been at it for a long time,” adds Harris. “We know that they’re some of the funniest people out there, and they’re just waiting for the right role.”

Being on set with Malkovich was, Schwartz admits, intimidating.

“The first time I ever met him was a scene where literally Steve Carell’s character is flying a helicopter and we’re very afraid and Malkovich says something and my line to him is just telling him to shut the fuck up, and that’s the first thing I ever said to John Malkovich, which is terrifying,” he says.

While he later found Malkovich to be a kind and lovely person, going out of his way to attend Schwartz’s shows, the veteran actor maintained his mystique.

“When the scene was done, I said, ‘Oh, so where do you live?’ … He goes, ‘I don’t really live anywhere.’ And it was the best moment,” Schwartz says.