Why Stars Are Lining Up to Appear on ‘Sherman’s Showcase’

John Legend and the IFC comedy’s creators reveal how they layered social commentary, sharp jokes and a great score into the TV dance-party spoof to make it destination TV 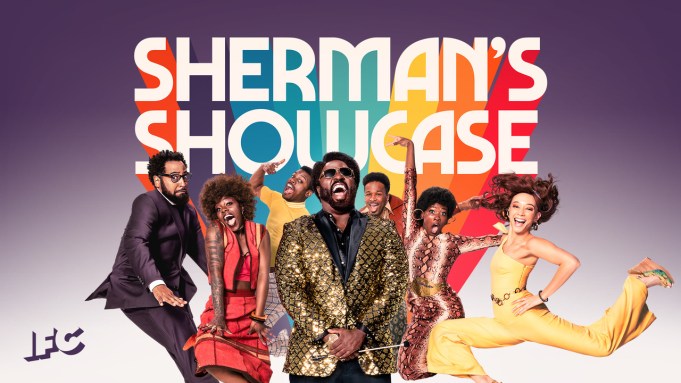 IFC’s “Sherman’s Showcase,” the brainchild of Diallo Riddle and Bashir Salahuddin, is a lot of different things at once. Framed as a spoof of ’60s and ’70s TV dance parties, it’s itself a great TV dance party, with original songs and ensemble routines. A sketch show in the classic tradition, it also offers tart commentary on four decades of African American culture and the overall national scene.

But make no mistake: its main order of business is to make you laugh.

“For Bashir and I, funny is always first,” Riddle tells moderator Elvis Mitchell during a video chat with executive producers John Legend and Mike Jackson. It’s part of the “Series Rewind” series streaming on Variety.com.

Writing and performing partners since their days as Harvard classmates in the ’90s, Salahuddin and Riddle have scored award nominations for their work on latenight comedy shows. But the success of their first-season series — rated 100% Fresh on Rotten Tomatoes — catapults them to new heights of acclaim.

The show’s premise is that entrepreneur Sherman McDaniels, portrayed with desperate showbiz geniality by Salahuddin, regularly graced TV screens with his weekly musical “Showcase,” now being sold as a DVD collection. (The suggestion that some of the episodes are mysteriously missing is a droll touch.)

Within the infomercial motif, Riddle and Salahuddin insert long- and short-form alleged clips from the variety show’s past, which is to say, whatever strikes their fancy: musical numbers, game show parodies, political roundtables, faux vintage commercials. Even, at one point, a dancing robot.

The format is “a front for an ability to have fun with 40 years of music and content,” Salahuddin admits. “We are sort of allowed, by using that prism, to make content and jokes and sketches about literally anything the writing room comes up with.”

They’re particularly fond of movie spoofs from film noir to French New Wave, which they’re proud they can pay homage to without seeking what Riddle calls “a Black way into” any genre. “We’re kind of a Black show, but we’re sort of universal in what we cover.” A clip is aired from “Temptations 11,” which mashes up any number of music-star documentaries with action movies in which a team (here, an army of Motown greats) collaborates on a heist.

Legend discusses playing a seethingly jealous version of himself, in which he tries to prank Common into embarrassing himself on stage in fruitless pursuit of an “EGOT.” (That’s the combination of showbiz awards Legend has amassed, though his pal is one Broadway award short.)

“I’ll let you in on a little secret — all of us musicians would like to see ourselves as funny,” Legend reveals. “When you ask us to do these kinds of things, it’s kind of cool. We finally get our chance!”

Capper to the sketch is a surprise appearance by EGOT-holder Quincy Jones, though lining him up “was a lot of calling and personal contacts,” Riddle says. “We didn’t know up until the day that John was going actually to be able to get us Quincy.”

Over time, though, the major names popping up on screen created what Salahuddin calls “a bit of a snowball effect.

“Once people started putting clips on social media,” he continues, “we had several people who reached out to us, and it was like ‘What are y’all doing in Glendale?’…. It just kind of tagged to us that, okay, we’re on the right track. We’re doing the right thing, because the folks we want to work with are not just saying ‘Yes’ to us, but reaching out to us.”

The fellows are quick to lavish praise on their team, including director Matt Piedmont, costume designer Ariyela Wald-Cohain and the dancing ensemble. They chuckle that their team is working on a budget that a major network series might allot to its catering, yet “people really worked their butts off,” says an admiring Salahuddin.

Yet when all is said and done, a musical variety show is going to be defined by its music. Few summon the composing and performing talent featured regularly on “Sherman’s Showcase.”

“Music allows us to do so many cool things on the show,” Legend states, praising the creators’ “musical understanding and fluency.” Jackson concurs: “What they do with blending comedy and music is second to none. When we were first approached with the idea, it was something that we thought was unique and special — a new paradigm with the canvas of being unapologetically Black with the content, to the point of not having to make excuses for the things you want to share …. A wonderful opportunity, and something we haven’t seen before.”

Certainly something no one’s quite seen before is the show’s most Tweeted-about musical segment, an allegedly censored appearance by girl group “RWKSY” (Real Women Know Something, Y’all) offering their melding of gospel and seductive R&B entitled “Drop It Low for Jesus.” In the spirit of accepting ideas from anyone and everyone, Salahuddin’s sister Zuri came to them with the concept: “I hope it’s not too edgy for you.”

“The song that took the internet by storm!” exclaims Riddle, and Salahuddin gives a shout-out to Phonte Coleman for the lush modern gospel sound. “When they first played it for me, I was like, ‘Wow, this could be on the radio,’ and then eventually it was, very briefly.

“And then some people were mad about it!,” he grins.

And just maybe, they’ll find something of a tonic for what ails us in these troubled times.