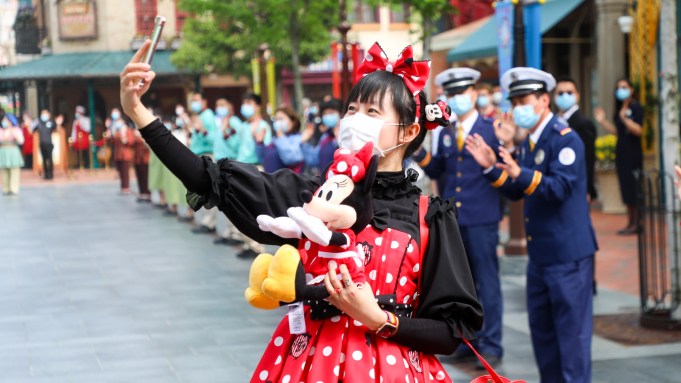 While their daughter imperils her Elsa outfit with her quickly disintegrating Mickey Mouse ice cream cone, Chen Sijia and Chen Hao are taking a breather.

They’re among the many young families and groups of friends that are once more filling up Shanghai Disneyland, which reopened May 11 after being closed for more than three months due to measures aimed at mitigating the COVID-19 pandemic.

Frequent visitors with annual passes, the couple was concerned about whether it would be safe to mingle with thousands of strangers. But with the park limiting guest numbers to 20% of its max capacity and employing a variety of social distancing measures, they felt it was safe to visit. “They do things really well,” says Chen Hao, 37. “Staff are constantly cleaning and telling people to keep apart.”

For its initial opening phase, the park also suspended indoor theater performances, installed hand sanitizer dispensers and canceled nighttime fireworks. Visitors must wear face masks, have their temperature scanned and be able to show a green QR code on a government-affiliated health-tracking app.

All park visitors who spoke with Variety say that Disney’s hygiene measures helped convince them to purchase tickets, a sign that the company, which estimates its total losses across all divisions due to COVID-19 at $1.4 billion, has found a workable formula with which it could reopen its theme parks in the U.S., France, Japan and Hong Kong.

But building enough trust to reopen parks might rely more on the efforts of local governments than on the company itself. Guests in Shanghai stressed that the coronavirus outbreak dwindling in the region was ultimately the most important factor in their decisions whether or not to visit the theme park.

Shanghai, a city of 24 million people, has kept its number of COVID-19 cases below 700, with about half of those being overseas returnees. It last registered a local infection in late March. Hong Kong has similarly low levels of infection and last recorded a coronavirus death back in mid-March, which could point to Hong Kong Disneyland being the next Disney park to reopen.

“If Shanghai wasn’t safe, then I definitely wouldn’t have dared come here,” says Joe Tang, 29. Waiting for her friends outside Pirates of the Caribbean, she says she wouldn’t mind if visitor numbers were allowed back to their usual 80,000 as long as the other measures stayed in place.

While the COVID-19 pandemic rages abroad and still sometimes flares up elsewhere in China, Shanghai’s own days of coronavirus angst are fast becoming a distant memory. The city’s increasingly relaxed rules create a contrast with those of the park. Rush-hour subway rides again mean jostling with the crowds, while in Disneyland, ride seats are pointedly left empty to spread out passengers.

Such abundance of caution and caps on visitor numbers have slashed queues — by far the park’s most popular pandemic policy. “It’s so nice not to have to wait in line,” says Yang Qi, a 24-year-old on her first visit to the park, whose accompanying friend had informed her their speedy passages were an anomaly.

Jun Wei, 39, says he much prefers this week’s quieter visit to trips in the past. While he loves that the lack of crowds makes it easier for his family of four to keep their distance from other visitors, reduced wait times are the bigger bonus. “We’ve experienced what it’s like when there are 80,000 people, and it’s not that nice,” he says.

His wife, Xiao Yan, 37, says they weren’t too concerned about the health risks. Shanghai has good doctors and few cases, she says. “When it comes to COVID-19, I trust the government, and I trust Disney,” she explains. The couple and their two sons have more time to enjoy themselves. “Most wait times are just five minutes.”

With such short lines, some guests exited attractions only to enter them again. “We just went on Woody’s Roundup twice,” says Xue Mingshao, referring to a “Toy Story”-themed ride.

Xue, 36, says he’s still somewhat concerned about the pandemic, and tries to stay home as much as possible. But when he read that Disneyland was opening up again — and with social-distancing measures in place — he decided to book tickets for himself and his 4-year-old son. “It’s been so much fun,” Xue says.

He made sure to bring face masks and hand sanitizer, and he’s impressed with the attentiveness of the members of the park staff. Nevertheless, had the virus still been infecting people in Shanghai, he wouldn’t have come. “Disney is doing
a good job,” Xue says. “But it’s more important that the government does a good job.”