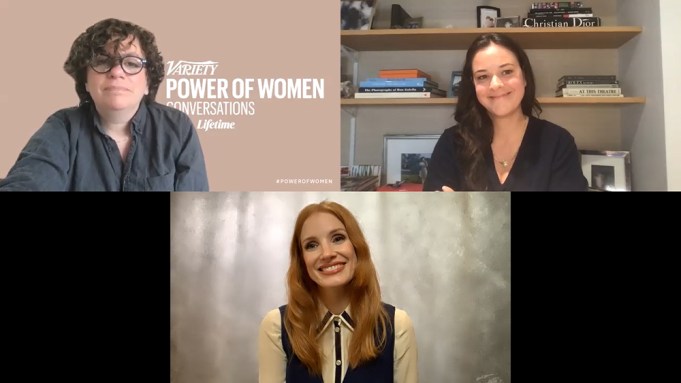 With the spotlight on inclusive storytelling shining brighter than ever before, women in Hollywood, both on and off screen, joined Variety Power of Women: Conversations which was a part of the Broad Focus Initiative from Lifetime.

This year’s virtual program covered everything from the making of “Grey’s Anatomy” to launching a women-centered production company. The challenges of being gender minorities in Hollywood aside, industry leaders spoke to the improvements they continue to see and encouraged audiences to bring change in their own ways.

Below are 10 takeaways from this year’s conversations and panels.

Jessica Chastain on “putting the money to where your mouth is”

When Chastain received the MVP Award at the 2015 Critics Choice Awards, she spoke up about the lack of roles and stories for women across the industry. During a press conference following her speech, the actor-producer was asked, “What are your plans now on creating inclusivity?” Answering that question sparked the idea of founding her women-centered production company, Freckle Films, that will premiere its first feature film “The 355” in January.

Chastain also encouraged the audience to take initiative on challenging injustices and flaws in any system they are working in: “You need to empower yourself, and you need to ask yourself what you can do in any industry. … Start making changes and people will follow.”

“Black AF” and “Parks and Recreation” star Rashida Jones spoke up on the industry’s need to challenge its dangerous narrative and racial profiling of Black women. She added that it is especially critical for the media to stop perpetuating stereotypes through storytelling.

“It’s its own narrative, specific to Black women and girls,” she said. “The quicker we get to really understanding the expectations and oppressions that are very specific to Black women to girls — the closer we get to you being able to create what you need to create without all of that burden.” Jones joined the #Represent: Black Female Creators virtual roundtable with Yara Shahidi, Gina Prince-Bythewood, Lena Waithe and Mara Brock Akil.

Why “Grey’s Anatomy” will portray the pandemic

When creating the upcoming season of “Grey’s Anatomy,” showrunner Krista Vernoff noticed that the experiences of doctors and nurses who spoke to the writers room had “changed as human beings.”

“I want to honor that. We’ve been having conversations about the tone, the energy, the urgency,” she explained. “I want to inspire people to take care of each other, to wear their masks, to help this pandemic end.”

Abrams created “All In: The Fight for Democracy” to spread awareness about voter suppression and share resources with the public ahead of the presidential election. Amazon Prime Video is even making the documentary available for free on its YouTube channel from Oct. 29 to Nov. 1.

The film follows the 2018 Georgia gubernatorial election in which voter suppression led to Abrams’ loss. The activist and politician shares her story to highlight the extended history of mass disenfranchisement. Watch the full conversation to learn how you can fight voter suppression.

When Lopez didn’t receive a nomination at the Oscars for her performance in “Hustlers,” 606 Film’s producer Goldsmith-Thomas thought to herself that “it’s a bigger deal that she didn’t get [nominated], because it’s a statement on the industry.” Goldsmith-Thomas added that though she quickly forgets the previous years’ nominees, she will always remembers Lopez’s stunning performance and the Oscars snub.

According to Warner Bros. chair-CEO Ann Sarnoff, Warner Bros. is still committed to premiering its next tentpole, “Wonder Woman 1984,” on Christmas day.

Sarnoff added that her team was “very pleased” with the box office results of “Tenet” that was “really good” considering its debut during the pandemic. For “Wonder Woman 1984,” her team will keep an eye out for how American cities and theaters continue to reopen, because the superhero movie is expected to skew more to the domestic market than Christopher Nolan’s blockbuster.

How the pandemic has changed the box office race

When asked about marketing strategies for “Tenet,” Sarnoff explained how the coronavirus-forced lockdown has changed the box office race into a “marathon rather than a sprint.” Because theaters across the U.S. and in territories abroad are just starting to reopen, Sarnoff explained how her team had to spread out its budget.

When Sia met up with Ziegler, the now famous dancer, on the set of “Music,” the young actor broke into tears in distress of portraying a character on the autism spectrum, sharing with the director that she was concerned of unintentionally hurting someone through her performance.

Sia reflected on the moment they discussed going over what Ziegler felt comfortable doing as an actor, adding that she hoped to rescue her from the pressure.

“She lived a life of stress,” Sia said of Ziegler. “Her childhood was the most stressful childhood that any child should have to live.”

In writing the Hulu comedy series, creators Anna Konkle and Maya Erskine, both age 33, attempted to capture what middle school felt like. They drew from every small experience from going to a shared bath to roaming around in the school hallways.

Anderson, who reprises her role of Prime Minister Margaret Thatcher in the upcoming season of “The Crown,” had to “put aside all preconceptions and opinions” when approaching the series.

“Because in making choices within scenes or within the arc of the series, one has to have a deep understanding of how they arrived to those decisions, how the character was able to take the actions and develop those attitudes and policies, in [Thatcher’s] case,” she said.

Anderson continued, on how this season of the show will not “enter into the battle about ‘feminist’ or ‘not feminist'”: “The conversation about feminism in her world probably wouldn’t have applied to her, I can imagine, given her mindset.” Take a longer look at the series, and it’s discussion of feminism at the link above.