The Quibi series’ executive producer and star talks about inventing a rap genre to extol the spiritual benefits of gardening — which Nikki does in makeup, gowns and heels 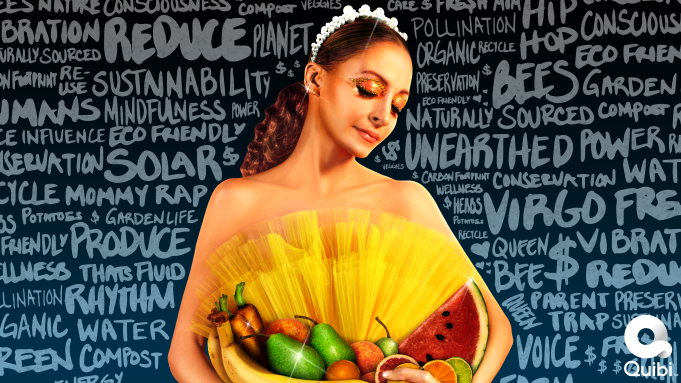 Nicole Richie refers to her hip-hop persona, Nikki Fre$h, in the third person because she wants to make it clear that the two are separate. Nicole may be fresh, but she’s not Nikki.

But if you’ve watched Richie’s comedic Quibi series “Nikki Fre$h,” which both celebrates and parodies the star’s love of nature and gardening, it’s not always easy to tell where the actress ends and the exaggerated version of her begins.

“The biggest difference is on an aesthetic level. I don’t wear a lot of makeup, ever,” Richie says. She spoke to interviewer Amber Ruffin (a comedy writer, but not on “Nikki Fre$h”) for Variety’s streaming offering, “Series Rewind.”

“And I’m not really in gowns unless I have to be; Nikki Fre$h is in gowns from the moment she wakes up,” explains Richie, who is also an executive producer on the series. “She wears gowns in the garden. There are headpieces. There’s makeup. They’re, like, full-blown looks.”

“And I have plantar fasciitis and I don’t have the strength to wear Nikki Fre$h heels all day like she does.”

What Richie does have the strength for is creating conscious hip-hop or “parent trap” songs with a message wrapped in satire. For instance, when the 38-year-old wife and mother raps about her kids doing their homework and chores in her song “Parent Trap,” there is truth to that. Meanwhile, her bop, “Bee’s Tea,” warns about the near-extinction of bees and why people should care about that and take action.

“I love gardening. I love growing my own fruits and vegetables. I feel like it’s the most incredible and exciting thing and very spiritual,” Richie says. “And it doesn’t have that reputation — gardening. And I was, like, ‘How can I communicate to the masses how cool this actually is? I’m going to do a trap album.’”

“Then I was, like, ‘I can’t do trap. I have too much respect for the genre. I can’t just bop my way in there. So I’m going to create my own genre, which is parent trap, which is music for people my age.’” Her musician husband, Joel Madden (of Good Charlotte fame), came up with the term “parent trap,” Richie says.

“I love music. I love hip-hop. I love dancing. I love all of it,” says Richie. “I’m not necessarily at the club. Those aren’t my peak hours, you know? I’m more of a morning type of girl.”

Ruffin, in turn, who is a big fan of the “Nikki Fre$h” persona and the six-episode series, says Richie’s love of music, the environment and organic food come through swimmingly in her songs and on her show.

“You can tell when someone is doing a show or writing something that they love,” Ruffin says. “It’s always the funniest thing you can do. It’s always the most honest character and that really shows. It is very adorable and it’s great to see you have fun and being knowledgeable.”

Richie says she initially pitched “Nikki Fre$h” as a parody album that her husband and his twin brother, Benji Madden, could produce. But after a meeting with the powers that be at Quibi, she realized her idea was bigger.

“I had wanted to do a comedy album about eating organically and growing your own fruits and vegetables, and being at one with the universe,” says Richie, who has released singles and music videos in connection with the show. “And then when I sat down with Quibi and really talked about that platform and this new, very cool concept — and it’s (Quibi founder) Jeffrey Katzenberg, so it’s just amazing all around. I was with showrunner and producer Carrie Franklin and we looked at each other and we were, like, ‘I know exactly what I want to develop and I’m going to develop it specifically for this.’ I need to explain to the world who Nikki Fre$h is. Otherwise, people are going to get confused. And so, you know, I just needed to, like, give her, her own story.”

It’s a story that includes message-packed songs about saving ugly vegetables from the garbage bin at the grocery store, using cement water bottles and the power of crystals.

“That’s why it feels so good and rings so honest,” Ruffin tells Richie. “Because you are this person. I mean, you know, it’s a heightened, goofy version. But you really feel this way. It really makes an impression on a person. I know that’s not what you set out to do. [But] that’s accidentally, kind of what you did. It’s a very cool idea.”

After Richie thanks Ruffin for the praise, she concurs. “I really do feel this way.”