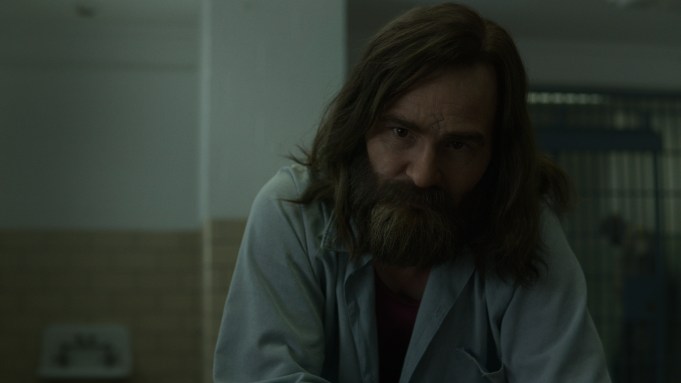 It’s Herriman’s second time playing Manson, having also taken on the role of the infamous killer in “Once Upon a Time in Hollywood.”

“It does make you question a few things about yourself,” chuckles Herriman about his twin turns as Manson.

“From an acting perspective, just in terms of playing a character, it was an incredible challenge, in a good way,” Herriman says of his guest-starring “Mindhunter” role, which he was cast in before he was tapped to appear as Manson in “Once Upon a Time in Hollywood.” “You want to push yourself as an actor as much as possible, and playing a very well-known person in a very big show that a lot of people are going to see, and a lot of time and money is going to be put into, you want to do it right. I was thrilled to get that opportunity.”

Herriman says he first auditioned for “Mindhunter” in late 2017 and had six months’ notice before filming his scenes for the series. “Once Upon a Time in Hollywood” came to Herriman later, but the Australian actor filmed scenes for both projects within a few weeks of one another.

Prior to landing the part of Manson in “Mindhunter,” Herriman read “Helter Skelter” and viewed a few Manson documentaries.

But Herriman says the makeup transformation was the most helpful part of the process.

“As an actor, you almost never get the opportunity to transform in such a dramatic way. And getting to look at myself in the mirror, become Charles Manson, was really invaluable,” Herriman says. “It was an extraordinary experience to sit in a chair for a few hours watching yourself transform like that.”

Hiro, for his part, credits Herriman for the success of the makeup. “Damon was the most prepared actor I ever worked with,” he says. “Even before I started makeup, he was really prepared. And without a great actor, makeup doesn’t work at all.”

A life cast was made of Herriman’s face — a 25-minute process — as Hiro contemplated getting Herriman’s Manson look right.

“Manson had a lot of hair on the face, with the beard and long hair, but the most important part is, of course, the eyes — and the eyes are the biggest difference between Damon and Charles Manson,” Hiro says. “That was a tricky part, because Charles Manson has a deep-socketed eyelid and Damon has kind of a heavy-hooded eyelid. So that was very, very important because most of the face is covered in hair and people look at the eyes of the character so that was the hardest part and that was the most important part.”

Herriman says most of his face was covered in prosthetics that slightly altered the contours of his own skin. Even with that, Hiro says it’s important to allow an actor’s performance to emerge in spite of the makeup work.

“I don’t want to pile up stuff on an actor’s face because that will prevent the actor from the acting,” he says.

The Manson makeup could be removed in about 40 minutes (“If we rush it, it will hurt the actor’s skin,” Hiro explains), but it took about four hours to apply.

“That was a really good time to experiment with what my face might do that might affect the makeup and vice versa,” Herriman says. “I would sit there kind of doing frowns and expressions, things that I’d seen [Manson] do and see how they read. If I was going to raise my eyebrows, did I need to do that with more effort than normal because of the makeup on there?”

Herriman found the makeup moved with his own facial movement pretty well.

“It’s quite extraordinary, you don’t lose too much at all,” Herriman says, “which is great because you don’t want to be doing something subtle underneath makeup that’s not going to read.”

Herriman says many people ask him what it was like to research Manson to play the role and whether he took the character home with him.

“This is not a character you want to be staying in,” he says. “The actual playing of Manson, certainly in the ‘Mindhunter’ scene, it’s him in jail. He’s locked up, he’s ranting. That’s not the disturbing part. For me, the disturbing part is doing the research of what actually happened over those two nights [in 1969 when Manson’s followers murdered seven people]. It didn’t matter how many times I’ve read about it or watched the documentary describing it, it absolutely chilled you to the bone to think what those people went through.”

With that in mind, Herriman says he’s ready to retire from playing Manson.

“I think twice is quite enough,” he says. “I actually ran into a friend a few months ago, who’s a writer, who said, ‘Oh, I’m writing this thing about so and so. And the final scene is him in prison with Charles Manson. You’d be up for that, right?’ I was like, ‘No! No, definitely not doing that a third time.’”