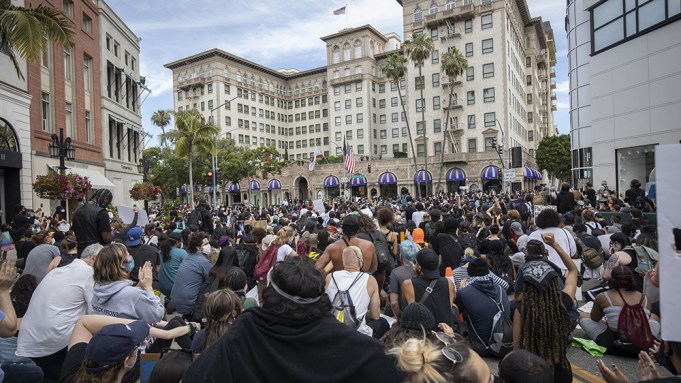 UPDATED: Los Angeles mayor Eric Garcetti has imposed an 8 p.m. curfew on Saturday for all of Los Angeles as protests against the death of George Floyd continue. The cities of West Hollywood and Beverly Hills had earlier instituted 8 p.m. curfews for the night.

Garcetti added that the curfew was an effort to reduce looting, property damage and violence that have occurred during the widespread protests.

A mass gathering at Pan Pacific Park spilled out into surrounding streets, while several LAPD cars were set on fire and other violence was reported in the area of Fairfax Avenue and Beverly Boulevard near the CBS Television City complex and the Writers Guild of America West headquarters. LAPD officers and helicopters swarmed the area during the afternoon.

A police car was in flames in Central L.A. as protests continued Saturdayhttps://t.co/4CEtKhwZCr pic.twitter.com/v4fpCMZHlA

The protests eventually moved toward Beverly Hills, where CBS Los Angeles reported that some stores on Rodeo Drive were being looted.

In addition to Los Angeles and Minneapolis, large-scale protests and unrest has been reported in Atlanta, Houston, New York and other cities.

Several celebrities, like “Insecure” actor Kendrick Sampson, Machine Gun Kelly, John Cusack and J. Cole, were seen on social media joining the protests around the country. During an Instagram Live video, Sampson said he had been shot by a police officer’s rubber bullets and was bleeding from his leg.

The death of Floyd while in police custody has spurred widespread national outrage at the image of a black man dying seemingly at the hands of police. One Minneapolis police officer has been charged with manslaughter for pressing his knee against Floyd’s neck while he lay flat on the street for more than eight minutes even as Floyd struggled and said “I cannot breathe.” Floyd’s arrest was captured on videotape by a bystander as others urged the four officers at the scene to ease the pressure on Floyd’s neck.