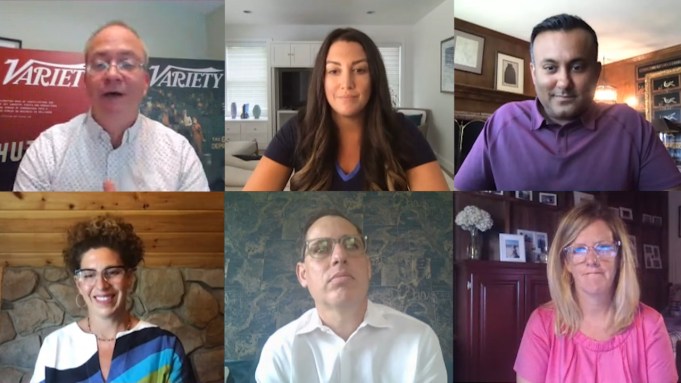 With shelter-in-place and social distancing regulations in place, consumers have been watching more content than ever. With the huge audience influx, advertisers have had to adapt with new strategies in the changing market.

LiveRamp execs and other industry leaders joined the Variety Streaming Room on Wednesday for a conversation moderated by Variety NY digital editor Todd Spangler, discussing advertisers’ current strategies and new data on Americans’ content-consumption trends during COVID-19 quarantines — and forecasting what current habits may entail for the future of the industry. (Watch the full session below or at this link.)

At the start of the event, LiveRamp’s head of buy side TV Christine Grammier provided a presentation analyzing how consumer behavior has shifted during the pandemic.

“Viewership is up tremendously across all platforms,” Grammier said. “Now we’re looking at a buyer’s market where brand agencies are truly trying to be specific about what they want and they need.” She noted that after some advertisers paused spending and are looking to reenter the market, “The tools that they need to use are different. The measurement systems that they’ve relied on for the past couple of decades really are not serving them well.”

Grammier also pointed to over-the-top media services as a key arena for advertisers in the future, a position that has only solidified as viewing habits have gone up during the pandemic.

“You have to be in the OTT platforms,” Grammier said. “You have to really be considering where your audience is… The tipping point is here. TV advertising is changing, there is no doubt about it.”

After Grammier’s presentation, LiveRamp TV chief strategy officer Jay Prasad spoke to advertisers’ need to think around the vast range of options that consumers have at their disposal for content.

LiveRamp is “really trying to understand the mass fragmentation that is happening, and trying to prepare its clients and partners to find ways to manage through that,” Prasad said. “There’s a lot more concentration around news, but after that it really does spread out to a wide variety of places and apps and screens. It’s definitely going to have a big changing dynamic on how things end up getting executed, but also it’s accelerating what might be the future.”

Kristina Shepard, Roku’s head of East Coast sales and agency partnerships, offered a glimpse at the unique perspective the connected-TV platform provider has had on the viewership increase, explaining that consumers have diversified that consumption in the past months.

“We get a bird’s-eye view,” Shepard said. “We have the Roku ecosystem but also, through our Roku smart TVs, [we] get to see what’s happening on linear. So a lot of our brands have come to us trying to understand where these audiences are shifting.”

Roku in April grew overall streaming hours 80% year-over-year, with the three major content categories of fitness, gaming and music, “which is interesting because the traditional Roku household from existing consumers mostly uses the platform for movies and TV content,” Shepard said. “Now they’re really using it for cases they never thought to before… Overarchingly, those kinds of habits that are now forming will continue on post-COVID as well.”

“We’ve seen a lot of bingeing on shows like ‘Grey’s Anatomy’ across all platforms,” Nelson said. “We’re seeing people watch shows that they may have not had the time before to dive into, but now have the time and are going back and starting from Season 1.”

While sports leagues have been shut down during the pandemic, Nelson said, “We’ve also been fortunate on the sports side, as we were able to be very flexible in our programming.” ESPN doubled-down on original programming, particularly on its “30 for 30” documentary series and 10-part “The Last Dance” about Michael Jordan and the 1997-98 Chicago Bulls, “to still capture sports viewership at a time when live sports don’t currently exist.”

Denise Colella, NBCUniversal senior VP of advanced advertising product and strategy, talked about how the company hopes the current circumstances will lend a captive audience to the company’s imminent launch of its streaming platform Peacock, set to debut nationwide on July 15.

“I think it’s a fantastic time to be coming out with something like Peacock,” Colella said. “Obviously, we’ve seen an increase in consumption… As far as how this will continue on, things are changing by the minute, by the day, by the week at this point. It’s difficult to say whether we’ll see continued streaming habits as we’re seeing today. But we’re quite optimistic as we head toward our national launch.”

“I think we underestimate the emotion [of] why people are going to streaming,” Egan said. “There’s a need to get away a little bit and combat the intensity of the moment that we’re in.”

Watch the full conversation below (or at this link):