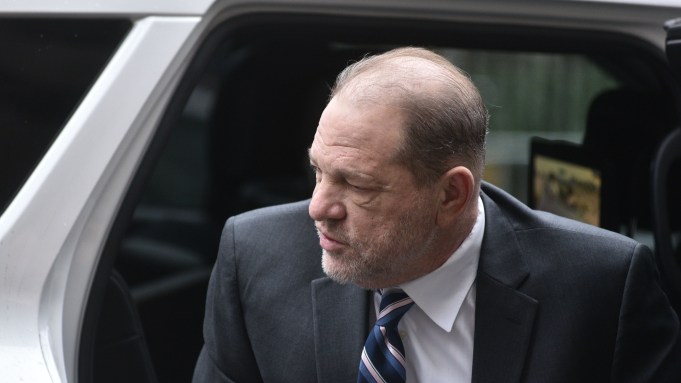 Lauren Young, the final accuser to testify against Harvey Weinstein, told the jury on Wednesday that the former mega-producer lured her into a hotel bathroom, grabbed her breast and masturbated in front of her when she was trapped in the bathroom.

“I’m saying ‘no no no,’ and he’s just carrying on normal conversation, saying ‘This is what all actresses do,'” Young testified.

Young said she was directed by Weinstein into the bathroom in a hotel suite at the Montage Hotel in Beverly Hills, and she resisted to no avail. Young testified that she originally came to meet Weinstein at the hotel with the understanding she would be meeting him downstairs in the lobby bar for a conversation to discuss her career and pitch an idea for a script.

“I was excited,” Young said of the business meeting with Weinstein. “I got ready and I put on my best dress and I was excited to network and pitch my idea.”

Young is the last of three “prior bad acts” witnesses whose testimony is intended to buttress the accounts of the primary accusers. Her accusation is also the subject of a separate criminal charge in Los Angeles, which was filed earlier this month.

Young said she agreed to come to the Montage hotel on Feb. 19, 2013 to meet with Weinstein and Claudia Salinas, a Mexican model and dancer whom she had met a year earlier at an Oscar party where Weinstein was present.

At the meeting downstairs, she said Weinstein seemed distracted and was on his phone. Weinstein suggested that she take part in “America’s Next Top Model,” but she said she wasn’t interested in that because she didn’t want to be on a reality show; she wanted to be taken seriously as a script-writer and actress.

(Weinstein has never had any involvement with “America’s Next Top Model,” though his former company, The Weinstein Company, produced another reality competition show, “Project Runway.”)

Weinstein suggested that he, Salinas and Young continue their conversation upstairs, saying he needed to get ready to receive an award from Quentin Tarantino that night. Young said they got in the elevator, and Weinstein led her up to his room, as they continued the professional conversation about her career. They went inside the hotel room, and she said she was led into the bathroom, and that Salinas then shut the door behind her.

“I stood there in shock. Out of fear, I started laughing,” Young said. “I never laughed being that scared in my life. I never laughed that nervously.”

Young said Weinstein took his clothes off. “It was the quickest I’ve ever seen anybody undress,” she said.

“I was really worried and scared that they were going to hurt me or something,” she said.

She said she turned away, not wanting to look at Weinstein’s naked body, and he unzipped her dress, pulling it down to her elbows and exposing her breasts.

She said he tried to touch her vagina, but she was able to block him with her hands. He then continued to grope her breasts to the point that she was in pain. “He was pinching my nipple and grabbing hard,” she said, adding that he didn’t let go of her breasts until “he finished.” Young said Weinstein ejaculated into a towel that he threw on the floor and then left the bathroom. She said she stood there in shock and then pulled up the dress and got out as quickly as she could, shooting an “evil look” at Salinas on her way out.

“I remember his body was hairy, he had some rolls, and he had a disgusting looking penis,” she said, saying his penis appeared to be scarred, and his testicles were not intact. “Something didn’t look normal,” she said.

As she described his anatomy, Weinstein was shaking his head at the defendant’s table.

On Tuesday, the jury was shown naked photos of Weinstein during the testimony of Jessica Mann, a rape accuser who also described Weinstein’s genitals as disfigured.

Young said that she never wore the white lace dress again that Weinstein allegedly unzipped when he trapped her in the bathroom because it was associated with bad memories. She said she was able to retrieve the dress and slip for prosecutors, and she had never washed it after the alleged incident in Feb. 2013.

During cross-examination by Weinstein attorney Damon Cheronis, the dress was brought out as evidence. In a moment of courtroom theatrics, Cheronis put on rubber gloves and held the dress up in front of Young and the jury, as he asked her questions about the dress.

“And you know that turning that over in the middle of the trial makes it pretty hard for it to be tested?” Cheronis said, as the judge sustained another objection.

Young’s testimony continued Thursday morning when Cheronis continued his cross-examination, trying to poke holes in her story by presenting his perceived inconsistencies from her testimony in court versus her questioning with detectives and the D.A.’s office in the time leading up to the trial.

Cheronis specifically asked about a time Young told law enforcement that she “blacked out” when she left the bathroom after the alleged assault at the Montage hotel. On the stand on Thursday, Young said, “My memory blocked out. I meant blocked out, really, because it was such a traumatic experience.”

Cheronis grilled Young about Weinstein’s genitalia, asking her exactly what she told detectives during her original questioning, in preparation for the trial. Young was asked to describe the appearance of Weinstein’s testicles and scrotum and his ejaculation, which was said was “lumpy” and “did not look normal.” Cheronis also asked if she saw Weinstein inject medication into his penis at any point. Young said no, but when asked on re-direct if she ever looked in the trashcan where she would potentially find a needle, Young said she did not. (Key witness Mann revealed during her testimony that Weinstein had to inject himself with medication to get an erection, and recalled being terrified when she first found a needle in the trashcan in a hotel bathroom, after she was allegedly raped.)

Following cross-examination, the prosecution brought in one of Young’s friends to corroborate her story. The friend testified he was with Young the night her meeting with Weinstein at the Montage, which he, at the time, understood to be a business meeting for the purpose of discussing her script idea. The friend said Young was very “excited” for the meeting, but when she returned from the Montage, she was “extremely upset…it was probably the worst I’ve ever seen her.”

NOTE: This story was updated on Feb. 6, 2020 to include details from Cheronis’ further cross-examination of Young, and the testimony of the prosecution’s corroborating witness.