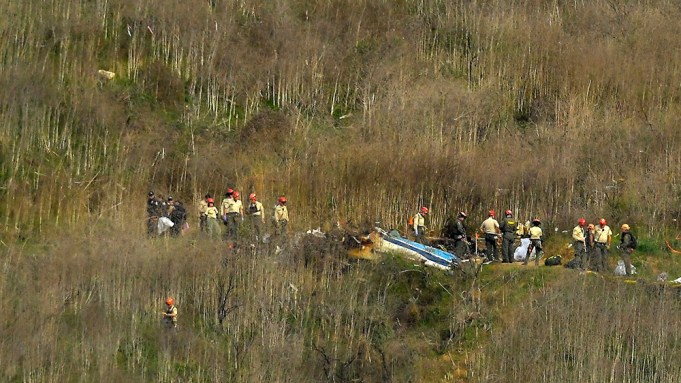 The pilot of the helicopter that crashed on Sunday, killing Kobe Bryant and eight others, radioed to the tower that he was trying to get above the clouds shortly before the crash, an NTSB official said Monday.

Jennifer Homendy, a board member of the National Transportation Safety Board, said that the agency would look at weather among many other factors in determining the cause of the flight. The Calabasas area was shrouded in heavy fog at the time the helicopter went down.

At a press conference on Monday afternoon, Homendy said the debris field extends 500-600 feet in rugged terrain. Sheriff Alex Villanueva said that deputies on horseback and in ATVs were patrolling the area to keep out souvenir hunters.

The Sikorsky S-76B took off from John Wayne Airport shortly after 9 a.m., bound for Camarillo. Homendy said the pilot circled over Glendale for about 12 minutes until air traffic controllers allowed him to proceed under “special visual flight rules.” The helicopter traveled north toward the 118 freeway at an altitude of about 1400 feet, and then cut south toward the 101 freeway.

The pilot asked the tower for “flight following” — a procedure to track the flight and provide guidance. But the controller told the pilot, “you’re still too low for flight following,” according to air traffic control audio.

“Approximately four minutes later, the pilot advised they were climbing to avoid a cloud layer,” Homendy said. “When ATC asked what the pilot planned to do, there was no reply.”

According to radar, the helicopter climbed to 2300 feet and began a left descending turn, she said. The last radar contact was at 9:45 a.m. The crash site is on a hillside at about 1,085 feet above sea level.

Homendy said the helicopter does not have a “black box” to keep cockpit data or voice recordings. The pilot did have an iPad that was used for flight plans and weather briefings.

The NTSB is asking anyone who has photos of the weather in the area on Sunday morning to submit them to witness@ntsb.gov.