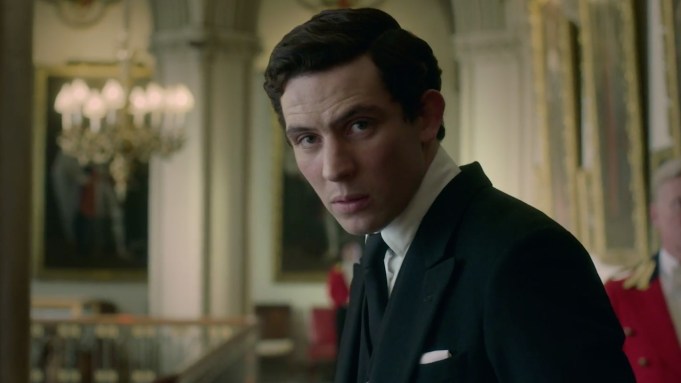 For Season 3, “The Crown” rested on a new set of actors.

The next installment in the adventures and trials of the royal house of Windsor jumped forward in time, and another ensemble was gathered to play Queen Elizabeth II and her family. So in the latest episode of Netflix’s “Scene Stealers,” Emmy-winning casting director Nina Gold joins Josh O’Connor, who took on the role of Prince Charles, to discuss remaking the cast while keeping the essence of the characters.

“We had to go back to the drawing board,” says Gold, who has been with the popular series since the beginning. “We had a whole extra challenge of not only casting the roles and casting people to play the real people — as well as the fictional version of them — but also casting people to kind of take on the mantle from the previous people.”

“I was very familiar with Josh. I remember Josh from drama school,” Gold says. “Then I saw him in ‘God’s Own Country,’ when I saw what a totally transformative, can-do-absolutely-anything actor he is.”

For his part, O’Connor realized he might have an advantage in the competition for the role.

“My ears are, you might say, prominent,” he says. “I thought there’s only a couple of us ‘eared’ folk in my kind of generation of actors in the U.K., so I did think there is a chance [of getting the role],” he recalls.

More telling than the ears, though, is a typical Prince Charles gesture that O’Connor spotted, as actors are wont to do.

“I’d often go back to something that he seems to do whenever he gets out of a car,” O’Connor says. “Any kind of footage of Charles getting out of a car in real life, he seems to check one cuff link, check the other, check his pocket and then wait. If I’m in doubt, that’s what I’ll do.”

It’s one thing to spot a man’s tics and what they suggest about his attention to appearances, but to play Charles required an exploration of his inner life.

“He’s essentially just a boy who has to share his mother with an entire nation of people, and when you reduce it down to that, you do feel sorry for him, I think,” O’Connor says.

There was also the added pressure of the series jumping forward in time, bringing the characters closer to the figures familiar to many.

“I remember kind of approaching it and thinking the slight difference here is that we’re now getting into the territory of people who do know Prince Charles,” O’Connor says. “He’s crept into our subconscious over time.”

Adds Gold, “Certainly, in Britain, we don’t even realize how much of a kind of subliminal knowledge we have of the royal family and how it’s kind of fed into us on a daily basis for our whole lives, so you have a preset idea of who these people are. But then I think the brilliant thing about it is that we’ve all got this idea of who they are, but then in the writing there is something that makes them into real people.”

O’Connor pinpointed the understandable predicament of the well-known Charles during his audition.

“One of the scenes I read was between Camilla and Charles, and Charles is talking about Saul Bellow,” O’Connor recalls. “And there’s a character from an American novel and he’s waiting to be drafted to go to war because he actually wants to be drafted because it will give his life meaning, and I remember that as a kind of concept of Charles — waiting for his mother to die in order for his life to take meaning.”