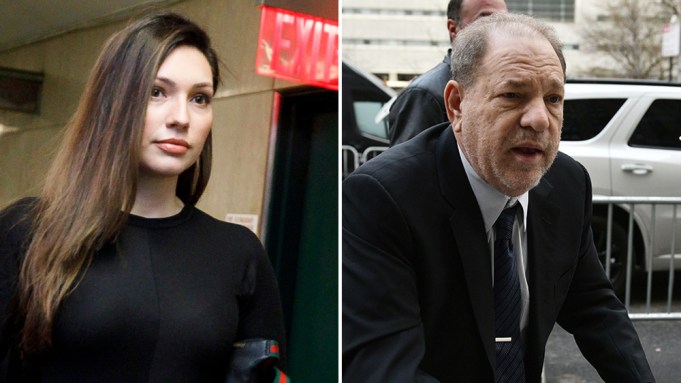 Jessica Mann, a key witness in the trial of Harvey Weinstein, faced a second day of cross-examination on Monday about the complex nature of her relationship with the disgraced producer.

Mann, a hairdresser and aspiring actor, gave explosive testimony on Friday in which she accused Weinstein of violent sexual assault and rape, and claimed the former movie mogul had “deformed” genitalia.

On Monday, Weinstein attorney Donna Rotunno suggested that Mann stayed in the relationship for her own professional gain, citing industry parties where she was invited as Weinstein’s guest and emails to The Weinstein Company where she inquired about scripts, meetings and travel expenses. Rotunno also accused Mann of lying to Weinstein by pretending to want to have sexual relations with him, as a way to get what she wanted.

“As manipulated as you felt, you manipulated Harvey Weinstein every time you continued to see him after each sexual encounter?” Rotunno asked. After a long pause, Mann said, “How I handled it to survive and process things, I guess you can say manipulation.”

On the stand for hours, Mann repeatedly defended her relationship and continuous communication with Weinstein over the course of four years by explaining the unbalanced power dynamic between her and the mega-producer, who she feared could ruin her career as a hopeful actress. Mann said she was “abused” by Weinstein, but continued to engage with him “because, in my mind and the perception of the society that I lived in and the things and the way that he did threaten me, and it was always in my best interest.” She added, “I wanted to know that I was okay, and something wasn’t going to happen to me.”

Mann’s testimony forms the basis for three of the five charges against Weinstein — two counts of rape and one count of predatory sexual assault. For the defense, challenging her credibility is vital to getting an acquittal or a hung jury on those counts.

Mann has alleged that Weinstein raped her at her hotel room on March 18, 2013. She said the producer showed up to the lobby unexpectedly, and she panicked.

“I felt like I always had to obey and jump, and I just lived on edge a little bit, so that’s why I was panicking,” she testified. “The abuse would occur when he was unpredictable, and he was becoming unpredictable.”

She has said Weinstein convinced her to let him come up to her room. She said she wanted to get away, but ultimately she “shut down.” Rotunno asked if she willingly went along with what he wanted to do. “I obeyed him, yes,” Mann said.

Rotunno told Mann she could have walked away from Weinstein and never seen him again, to which Mann said, “Not from my point of view.”

At times, Mann seemed uncertain about the timeline of events. At one point, she said, “I’m a little foggy,” and asked for a break.

Later on, Rotunno confronted Mann with evidence of her emails, in which she thanked Weinstein and asked him for things. “And not one time did you say, ‘I’m not that interested,'” Rotunno pointed out. The lawyer specifically asked Mann about about the film “Vampire Academy,” which Weinstein said he was going to cast her in the lead role, shortly after their initial meeting at a party in Los Angeles In one email to Weinstein, Mann wrote, “I appreciate all you do for me, it shows.”

“I did try to express myself,” Mann said, saying that her emails to Weinstein were in order to “protect myself.” Asked whether she knew that “your words in your emails were a problem in your testimony,” Mann responded, “My words aren’t a problem. I just want to be able to explain what went into the underbelly of everything. … I don’t consider the truth a problem.”

Rotunno also asked about a 2013 dinner at the Peninsula where Weinstein asked for a massage, and she agreed. Noting that Mann testified that she was not romantically or sexually interested in Weinstein, Rotunno asked, “But you put lotion on your hands and put it on Mr. Weinstein’s hands, right?”

Mann responded affirmatively, and said, “My brain, it’s a little stuck, so I’m not sure where my mind was going exactly. … Harvey would compliment me. Harvey would be very charming and complimentary.” She said Weinstein told her she was “prettier than Natalie Portman.”

Mann, who grew up in a small town in Washington, first met Weinstein at a party in L.A., where he approached her and took interest in her as an actress. She gave him his phone number for professional purposes, which led to many dinners, drinks and other meetings. Mann said the lines quickly blurred between professional and personal, with Weinstein pressuring her to give him a massage at a meeting and then forcing oral sex after luring her into a hotel room under the premise that he wanted to cast her in a lead role in one of his movies.

In her previous testimony, Mann, who had a strict religious upbringing and said she was sexually inexperienced when she met Weinstein, admitted she entered into what she “thought was going to be a real relationship” with Weinstein. But she said the relationship became “extremely degrading” after a short while. She testified that she tried to break it off, but still stayed in touch with Weinstein for many reasons, including being fearful that Weinstein was going to hurt her father.

On Friday during cross-examination, Rotunno accused Mann of “overlooking Weinstein’s appearance” and staying in contact with Weinstein for her own professional gain. “You were using Harvey Weinstein,” Rotunno alleged.

Mann testified on Friday that Weinstein violently sexually abused and raped her on multiple occasions, going into great detail about Weinstein’s alleged propensity for degrading sexual acts, including urinating on her, talking “dirty” about his fantasies, comparing her to other “kinky” actresses and repeatedly asking to film her during sex. “He would say, ‘Do you like my big, fat Jewish d—?'” Mann recalled, during her initial testimony, also revealing that the first time she saw Weinstein naked, she thought he was deformed and intersex, saying, “He does not have testicles and it appears like he has a vagina.”

During Monday’s cross-examination, Mann provided more explicit details regarding her allegation that Weinstein once urinated on her.

“He was in the shower,” Mann said, recalling a 2013 incident in a hotel, she believed to be the Montage in Beverly Hills. “So he asked me to come into the shower and he asked, ‘Have you ever had a golden shower?’ And I said no, and then I felt him peeing on me.”

Starting to cry on the stand, Mann wept, “I was shocked by it. It was gross. I turned into the corner of the shower and just looked away.”