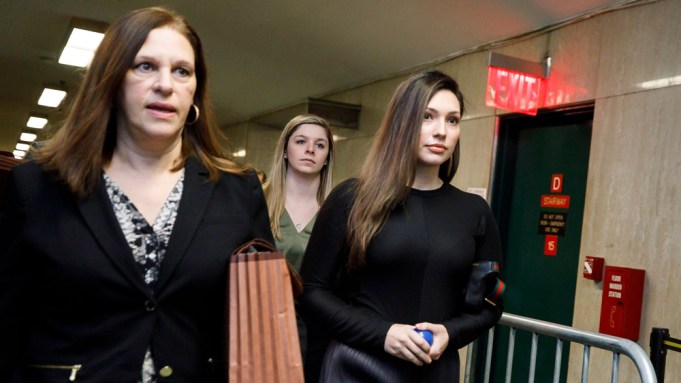 Jessica Mann — a key witness in Harvey Weinstein’s rape trial who alleges the former movie mogul raped her twice and sexually assaulted her on numerous occasions — was let off the stand on Monday when she said she was having a panic attack during cross-examination.

After being questioned for five hours by Weinstein’s attorney Donna Rotunno, the judge cut Mann’s testimony short, releasing the jury a few minutes before 4 p.m. on Monday in New York City Criminal Court, which is typically in session until at least 4:30 p.m.

Mann walked off the stand wiping away her tears. Shortly after, prosecutor Joan Illuzzi from the Manhattan D.A.’s office followed her into the witness room.

Mann first appeared in court last Friday to begin her testimony, and continued Monday with cross-examination. She is expected to return Tuesday to be questioned again by Rotunno.

No other witness throughout the trial has been on the stand for longer than six hours, contained in one single day.

Last Friday, Mann was crying uncontrollably and her testimony was cut short by Justice James Burke with Illuzzi helping her off the stand. Before Burke dismissed court earlier than planned Monday afternoon, Mann asked for a quick break earlier in the day, stating that she was “a little foggy” and wanted to collect herself.

Throughout the grueling cross-examination on Monday, Mann had trouble nailing down an exact timeline for the specific events, which Rotunno pressed her on repeatedly, noting the importance of the dates and times of the alleged sexual assaults. Many times throughout questioning (when it’s protocol for witnesses to give a yes-or-no answer), Mann wanted to give a longer explanation and told Rotunno, “We have not talked about why.”

Rotunno asked Mann about her former boyfriend, Eddie, with whom she was in a relationship, while also involved with Weinstein. In various emails that Mann sent to Weinstein in late 2013, which were provided to the jury as evidence, Mann had told Weinstein about her boyfriend, writing that she “fell in love” with another man and “wanted to do right by him.” In the emails, she also thanked Weinstein for his support of for letting her grow, as she learned “to be a woman.”

As questioning grew more heated, Rotunno accused Mann of not telling her boyfriend about her relationship with Weinstein. Mann admitted that she did not tell her boyfriend about Weinstein, nor did she inform him of being raped at the Doubletree Hotel and at the Peninsula hotel on different occasions.

Rotunno then directed Mann to read an email aloud that she had written to her boyfriend in May 2014, finally acknowledging her relationship with Weinstein.

Mann burst into tears while reading the email, in which she explained why she continued to see Weinstein after the allegedly raped her — she said if she engaged in a consensual relationship, she would never have to feel like a rape victim ever again.

“I played into sexual dynamics simply to feel I would never be taken advantage of again,” Mann wrote in the 2014 email to her then-boyfriend.

In the email, Mann also wrote that her childhood had an impact on her entering a relationship with Weinstein, due to her father’s dating habits.

“I accepted that my father was an older man who dated women younger than me,” Mann wrote. “Harvey validated me in ways my parents never did… My parents would never invest in me like that.”

Mann said in the email that when her friends asked her if she would tell her boyfriend about Weinstein, “I have said ‘Eddie can never know because I would die if you did…I knew what would happen…you would never talk to me again. There were those around me who said he never needs to know.”

“My secret and my fear was that part of the dynamic I had with Harvey would mean you would never talk to me again,” Mann wrote.

In the email, Mann also told her boyfriend about Weinstein’s genitals, which she testified about this past Friday.

“Harvey no longer has a penis,” she wrote to her then-boyfriend. “I never asked what happened.”

During her testimony last week, Mann revealed that the first time she saw Weinstein naked, she thought he was deformed and intersex, saying, “He does not have testicles and it appears like he has a vagina.”

She also alleged during her explosive testimony that Weinstein “degraded” her through sexual acts, including giving her a “golden shower,” talking “dirty” about his fantasies, comparing her to other “kinky” actresses and repeatedly asking to film her during sex. Mann recalled Weinstein once saying, “Do you like my big, fat Jewish d—?”

Three of the five charges against Weinstein stem from Mann’s allegations — two counts of rape and one count of predatory sexual assault.